Can anyone believe what Duterte says? | World| Breaking news and perspectives from around the globe | DW | 06.09.2018

Can anyone believe what Duterte says?

When politicians can say everything and mean nothing, trash-talking strongmen like Philippine President Rodrigo Duterte are the result. DW's Conflict Zone meets Salvador Panelo, chief legal counsel to Duterte.

In a political era in which partisanship is encouraged rather than confronted, careless words and even insults can be defended by supporters. Any speech, however intemperate, ill-advised or plain wrong, can be justified as evidence of "straight talking" and a more honest, less polished "new politics." 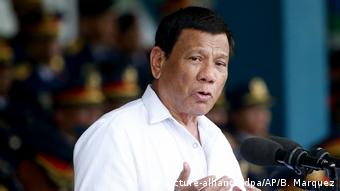 Duterte recently apologized for insulting Barack Obama in 2016, saying, "If it is (in) your heart to forgive, you forgive. I have forgiven you, just like my girlfriends when I was still a bachelor"

Rodrigo Duterte, the foul-mouthed president of the Philippines since 2016, has taken the language of his campaign – "When I said I'll stop criminality, I'll stop criminality. If I have to kill you, I'll kill you" – into his presidency, continuing his threats to kill criminals personally, insulting political and religious leaders as "sons of whores" and even enraging the country's Catholic majority by calling God "stupid."

So can anyone believe what Duterte says?

He has threatened to quit before his six-year presidential term is over, but Panelo says the president was only expressing frustration and defended his style as a winning formula that voters in the Philippines had "factored in."

"He would have not won the presidency if that was not his style. Cursing is one of them, being very brutally frank is another," he told Tim Sebastian.

Regardless of whether it was because of or in spite of his "brutally frank" approach, voters have given him a mandate to fulfil his pledge to wage a violent war on the illicit drug trade.

But human rights groups have decried the approach of the administration. Human Rights Watch says more than 12,000 people have been killed in Duterte's war on drugs since he took office in June 2016, a figure which Panelo says is "exaggerated." 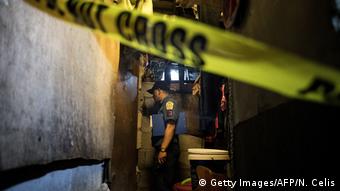 Philippine police have reportedly killed over 4,000 people in the country's drug war since 2016

"Killing happens because there is resistance to police authorities," Panelo said. "Otherwise there would be no killing."

On whether Duterte had killed people, as Duterte himself has boasted of, Panelo told Tim Sebastian: "Yes, but out of self-defense. Those killers were killing people and he was part of the operation."

Asked why no one was interested in investigating Duterte's claim that he killed a man when he was 16 for looking at him the wrong way, Panelo said: "Apparently, the people are not interested. You're the one interested. Why don't you conduct your own investigation?"

A preliminary investigation launched in February by the International Criminal Court (ICC) into Duterte's war on drugs was followed in March by the Philippines' official notice of withdrawal from the ICC.

"The provisions of the ICC statutes violate our constitution. Why? One, it does not observe immunity from suit of an incumbent president," Panelo said on Conflict Zone.

The International Commission of Jurists has dismissed the reasons given for the Philippines' withdrawal as "pseudo-legal," saying they focus on "President Duterte's fear and resentment at facing questions on the horrific campaign of extrajudicial killings that his government has endorsed."

Panelo denied the administration was scared by the ICC's inquiry. "The ICC has no jurisdiction over the Philippines," he said.

In 2015, before running for president, Duterte told reporters: "I won't do it if you want to place me there with the solemn pledge to stick to the rules. If you don't want that, okay, look for another son of a bitch." 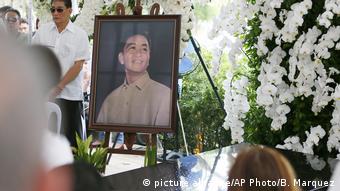 Duterte has said that if he were no longer leader, the Philippines would be "better off choosing a dictator of the likes of Marcos"

However, in 2016, Duterte seemingly abandoned his rule-breaking persona and ordered the reburial of former president and dictator Ferdinand Marcos in the national Heroes' Cemetery, almost 30 years after Marcos' death.

Was the aim to bring brutal tyrants and thieves back into fashion?

"No, he was just following what the rules say regarding presidents to be buried in [the national Heroes' Cemetery] for great men and heroes and martyrs and presidents," Panelo told Tim Sebastian.

The move caused widespread protest and was slammed by a former chief justice as a grave abuse of discretion and a violation of domestic and international law in relation to justice for victims. 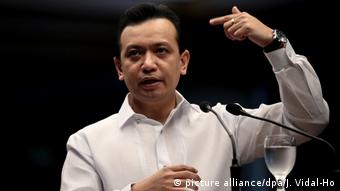 In the week following Conflict Zone's interview with Panelo, accusations of President Duterte's own dictatorial behavior were seemingly bolstered by the announcement that the president had ordered the arrest of opposition lawmaker Antonio Trillanes.

A vocal critic of Duterte, Trillanes was granted amnesty in 2010 for his part in a failed coup in 2003 and mutiny in 2007. His arrest would be the second of an opposition senator in 18 months.

After his decision to quit the International Criminal Court, Philippine leader Duterte has called upon other nations to follow suit. The ICC announced last month it was launching a probe into Duterte's brutal drug war. (18.03.2018)