Former Israeli PM voices doubts over use of force in Gaza

"In this context, I think that we have to consider other options of operations which will be less violent and damaging," Olmert told DW's Conflict Zone.

Since March 30, the so-called March of Return protests caused for weekly clashes at the border. The protests were originally planned to culminate with an attempt to breach the border fence for Nakba Day in May. Palestinians demand their right to return to where their families were expelled from during Israel’s establishment in 1948. 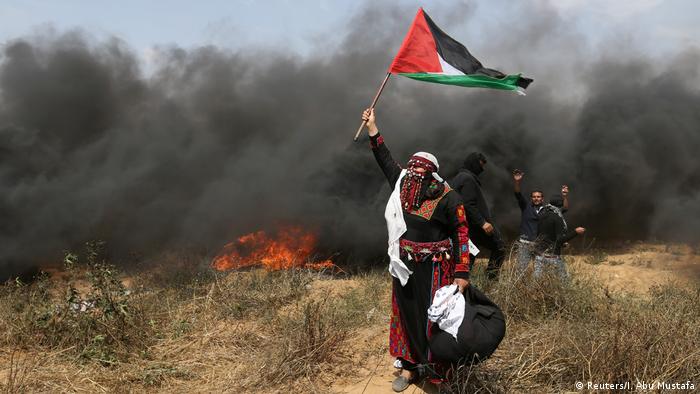 At the Israel-Gaza border, Palestinians demand the right to return to their homeland.

Israel said the use of force against protesters was necessary to defend its border, and accused Hamas of using civilians as human shields.

"Israel can't afford to have all these thousands of people penetrating into the part of Israel."

However, he also implied that Israel should change its mode of operation: "I think that we have to change the relations with Gaza in as much as it doesn't jeopardize the security of the state of Israel."

Olmert was responsible for the Operation Cast Lead between 2008 and 2009, where a total of 1,398 Palestinians were killed by Israeli forces, among them 345 children and 110 women. Then Foreign Minister Tzipi Livni said about the operations: "Israel demonstrated real hooliganism during the course of the recent operation, which I demanded."

Olmert defended Israel’s security doctrine but claimed to have no other choice: "It  is  the  simple doctrine which has characterized the conduct of every normal and reasonable country (...) which is when you are attacked by rockets into your cities, you have to defend yourselves. We have to use force."

DW’s Tim Sebastian asked: "How do you live with this huge loss of life that is that is caused by your orders?"

"No. It was caused by the fact that my people, my citizens, (…) innocent children in Israel were attacked," Olmert responded. Asked whether his children sleep more easily because Palestinian children are killed, he said: "When my children are not attacked by rockets coming from that side, they sleep better, yes. And they have to sleep better and that's my responsibility."

On a recent visit to Germany, Israeli Prime Minister Benjamin Netanyahu concluded: "If you're interested in peace, Israel cannot afford to have additional Palestinian territories used against us. The reason there is no peace is that the Palestinians refused to recognize the Jewish state."

Iran threatens to ‘wipe Israel from the map’

A second controversial issue is the 2015 Iran nuclear deal which the US has departed from. Israel also opposes the deal and in fact pressed Donald Trump to junk the deal, saying it will increase Iran's ability to develop nuclear weapons. 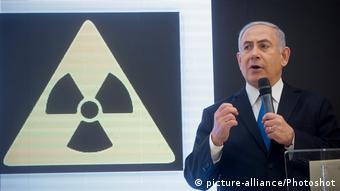 At the same time though, Israel has not yet openly communicated its own nuclear program.

Olmert defended Prime Minister Netanyahu’s stance: "Israel whether they have nuclear weapons or not, (...) never threatened to use it against anyone. Iran openly and publicly throughout all these years including from 2006 and earlier to this day threatened to wipe out Israel from the map."

When DW’s Tim Sebastian said that being a nuclear power has responsibilities and asked who Israel is to maintain a "strategic ambiguity," Olmert said: "We never wanted to wipe out any country from the map. And Iran repeatedly and continuously for many years is doing precisely this."

He also kept refusing to confirm or deny Israel’s nuclear capabilities: "There were so many nonsense stories that were spread about Israel and about Israel’s capabilities and what we have and we don't have..."

Olmert was jailed for corruption in 2014. He was accused of accepting bribes to promote a real-estate project in Jerusalem and obstructing justice. The charges pertained to before he became Prime Minister in 2006, when he was Mayor of Jerusalem and Trade Minister.

In the interview he repeated his claims for innocence, telling Tim Sebastian: "There was a conspiracy in order to try and put me down from my position as prime minister in order to prevent what I was trying to do which would have changed the entire Middle East. And that could have made history."

Confronted with his legacy, Olmert assured that he had no regrets, only "sadness for mistakes" he made. "[People] think that I was a good prime minister and they're right by the way," he said.

Over 100 dead. Thousands wounded. Israel has been unapologetic in the face of international outcry over its actions on the Gaza border. Michael Oren tells Conflict Zone there was "no choice" but to use lethal fire. (24.05.2018)

The Israeli and German leaders may have stressed commonalities, but on Iran's nuclear potential they're miles apart. Benjamin Netanyahu even warned that Iran's activities could unleash a new wave of refugees to Europe. (04.06.2018)

Israel's top court has upheld the use of lethal force against Palestinians amid weeks of protests on the Gaza border. The court said the protests took place in the context of Israel's long-running conflict with Hamas. (25.05.2018)

The fighting is the worst episode of violence since Israel and Hamas fought a brief war in 2014. The United States, European Union and United Nations have condemned the rocket and mortar attacks against Israel. (30.05.2018)

India's top court rules all women have right to abortion