An Israeli court has handed down a prison sentence to Ehud Olmert on bribery charges. The former Israeli prime minister had been found guilty of an illegal real estate scheme during his time as mayor of Jerusalem. 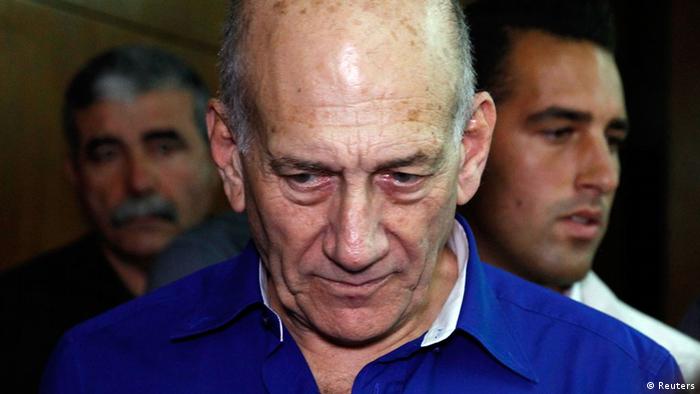 A Tel Aviv district court sentenced ex-Israeli Prime Minister Ehud Olmert to six years in prison over a real estate scheme in Jerusalem, where he served as mayor from 1993 to 2003. The 68-year-old former head of government vowed to appeal the court decision.

"[He] abused his senior position as a public interest to promote his [own] interests and received huge sums," Tel Aviv District Court Judge David Rosen read from his 50-page sentencing.

"A public official who accepts bribes is tantamount to a traitor," he added.

The former prime minister maintains he was innocent of the charges levied against him.

In March, Olmert was found guilty of two counts of bribery predating his 2006-2008 stint as prime minister. According to the court's findings, Olmert accepted more than 166,000 euros from developers of the Holyland apartment complex in Jerusalem in exchange for smoothing over legal and zoning restrictions.

Others have been accused in the case, including Shula Zaken, who served as Olmert's aide.

The bribery allegations against Olmert weren't the first to plague the Israeli politician. In 2009, a separate corruption case led to his resignation from the premiership. He was later given a suspended sentence and fined $19,000.