Over 100 dead. Thousands wounded. Israel has been unapologetic in the face of international outcry over its actions on the Gaza border. Michael Oren tells Conflict Zone there was "no choice" but to use lethal fire.

After weeks of protests on the Israel-Gaza border, over 100 Palestinians have been killed, alongside thousands injured by Israeli gunfire.

Against this background, Conflict Zone’s Tim Sebastian meets Michael Oren, Israeli deputy minister for public diplomacy and a former ambassador to the US. 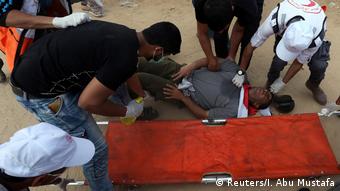 A wounded Palestinian protester is evacuated near the Israel-Gaza border. The UN human rights chief, Zeid Ra'ad al-Hussein, has said over 3,500 Palestinians have been injured by live ammunition

Sebastian asked Oren about his comments in a recent radio interview, where the deputy minister had said the Israeli army had come under intensive fire.

"There was a threat to the border and the soldiers are charged with defending our border from terrorists and civilians who have been driven by terrorists, with the express purpose of breaking through the border, killing our civilians and destroying our state," Oren said.

There had also been "dozens" of attempts to cross the border, Oren told Conflict Zone.

But according to an Israeli Defense Force spokesman, Lt. Col. Jonathan Conricus, on May 15, there were several attempts to cross the border and soldiers had "not taken any sustained direct fire."

Did Oren and Conricus therefore have different views about what had actually happened?

"Maybe I have a different interpretation than our military spokesperson because I'm also dealing with the Gaza issue on the government level. And it is not uncommon in combat situations to have different reports," said Oren. 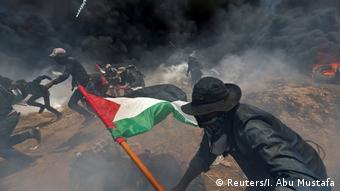 Palestinians have been protesting at the Israel-Gaza border since March 30, calling for refugees displaced when Israel declared independence in 1948 to be allowed to return

Were several attempts to cross the border, as Conricus said, a threat to Israel's way of life? asked Sebastian.

"I'm telling you that there were dozens of attempts to cross the border. And the people who were shot were presenting an imminent danger to our border and every shot taken had to have three clearance orders … We used lethal fire because there was no choice. And, last point: If they had broken through the border, many, many more people would have been killed including a great many more Palestinians."

Following the violence, which began with the start of the weeks-long protest on March 30, human rights organizations, the UN and EU have called for an independent international investigation into the deaths in Gaza.

The Israeli government has flatly rejected these calls and, Oren told DW's Tim Sebastian, will continue to do so. Israel said it will conduct its own impartial investigation.

Returning to the issue later in the interview, Oren told Tim Sebastian army snipers were accountable for their actions: "Every single bullet, every shot, certainly one that hit, has to be accounted for. We have a very specific record of every shot taken and it will be investigated."

These investigations had not yet begun and could take months, said Oren: "You have to look at all the films. You have to look at how many bullets were fired by that particular soldier and the chain of command it went through because no soldier fires at will. That order did not exist on the Gaza border."

The nuclear deal, also known as the Joint Comprehensive Plan of Action (JCPOA), was agreed in July 2015 by the US, UK, France, China, Russia, Germany, EU and Iran after more than a decade of negotiations. The JCPOA limited Iran's enrichment of uranium in return for economic sanctions being lifted. 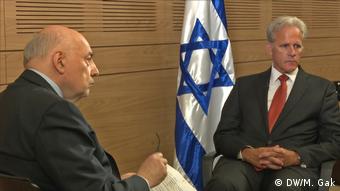 Critics of the deal included Israeli Prime Minister Benjamin Netanyahu, who praised US withdrawal from the agreement as a "bold decision" immediately following President Donald Trump's announcement he would do so on May 8.

"They [Iran] kept all the blueprints for the bomb. So, it's brilliant. If you're an Iranian that's getting paid tens of billions of dollars for this deal and using that money to spread terror to conquer the Middle East, why would you not keep the deal? Of course you are going to keep the deal," said Oren.

But Oren denied that there was no Plan B following the US's decision to pull out of the deal. "Plan B is an agreement which truly dismantles Iran's nuclear program."

Tim Sebastian asked if, after 20 years of warning about Iran’s nuclear bomb, the Israeli government was now making it a self-fulfilling prophecy.

"But it won't be, and they won't dare because they didn't do it before either because they knew what the consequences were," Oren said.

Israel and Turkey have continued tit-for-tat expulsions of diplomats over violence in Gaza that has killed at least 60 Palestinians. It comes ahead of a meeting of Arab foreign ministers to discuss "Israeli aggression." (16.05.2018)

UN human rights chief Zeid Ra'ad al-Hussein has slammed Israel for its treatment of Palestinians in the Gaza Strip. He said its response to recent protests was "wholly disproportionate." (18.05.2018)