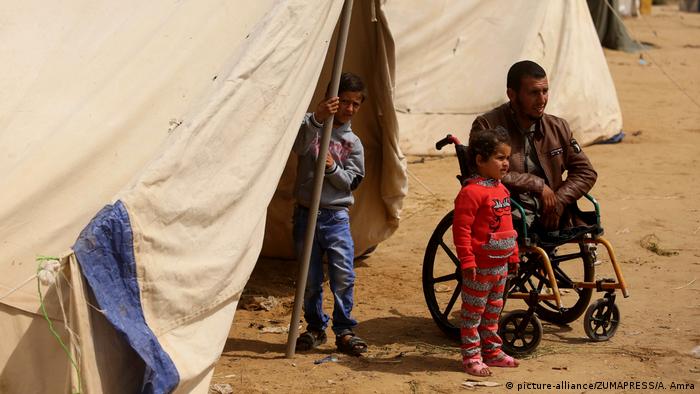 DW: Looking at the pictures of the protests in Gaza, one is struck by the willingness of thousands of people to march towards a fence with snipers sitting on the other side, ready to use live ammunition. Why are they so desperate that they are willing to put their lives at risk?

Jamie McGoldrick: There are a lot of factors included in the reasons why. And some of them are very much to do with the conditions on the ground and particular people have been living under a very difficult regime for the last 10-plus years.

And with the restrictions on movement outside Gaza — it is nigh on impossible for most people with all of the crossings blocked, for Gazans and Palestinians not able to cross freely and for access of materials and other things in there.

So what you have there, I think, is a sense of frustration, a sense of hopelessness and I think a discontent with the general living conditions there. And living conditions are pretty drastic. I mean you have economic deterioration, you have systems collapse … People have very limited access to clean water and they have to buy that in the open market and have it trucked into [Gaza], because the water systems are not potable.

Second, as to the electricity, which runs everything, it's basically four hours a day for people. And right now we are moving into the very hot season. On top of that you have civil servants that have not received salaries, full salaries, for months or at all.

And then you have ongoing service collapse like UNWRA, which is one of the big UN agencies providing support to Palestinian refugees in Gaza. […]

Between 18 and 30 [years of age], the unemployment rate is around 60 percent. And the general global unemployment in Gaza is over 40 percent. And it's no wonder, that there is a sense of rage, a sense of anger, that they face this. And I think the march to the wall for many people in Gaza is an opportunity to vent their frustrations and their anger.

Last year, a UN report came out warning that Gaza would be unlivable by 2020. And this report also said that the Israeli blockade amounted to collective punishment of the 2 million people in Gaza. Would you agree?

What I would say is that the conditions are already unlivable for millions of people in Gaza. That's not a normal life they're living in Gaza under these conditions, where you have no future. Where you have no prospects of a future, where the uncertainty of getting educated and getting a degree and having the prospects of a job and a future, of getting married, moving out of your parents' house and having a life of your own, buying a car — the simple things, that people aspire to in other parts of the world, they just don't exist in Gaza.

And so you have this large number of unemployed youth, who have skills, who have the ability to be employed, but they're constrained, because the market doesn't absorb them, cannot absorb them, because it cannot expand. There is no productive capacity there.

You can see by the fact that the number of trucks that are brought in to Gaza, commercial trucks that come in there to sell goods to people, have gone down over the past year in terms of numbers. And that just indicates that people just don't have the money to buy goods that are there. […]

So people face this very difficult position, and for some people it is already unlivable and for more and more people becomes unlivable … People can't get basic health care there.

You are UN humanitarian coordinator for the occupied Palestinian territory. How much is the Israeli blockade hampering your work?

It is hampering the work of the commercial sector, the viability of the economy in all the parts of the Gaza and the occupied Palestinian territory. And it affects all of what we do. It makes our life harder. We can bring our goods in easily enough, because we have the permits to do so.

But when you're trying to trade, or you are trying to have commercial enterprises — in these conditions it makes it very, very difficult. So, we have greater needs to address, as each year, each month goes on, and unfortunately, we don't have the international donor support.

Read more: "It is our obligation to continue - even under difficult conditions"

We are currently sitting at 16 percent funded, and this is almost halfway through the year.

So there's a general sort of disregard for Palestine and the international community, when it comes to funding the humanitarian side of things. And as long as the political situation remains unresolved and the conditions and the restrictions and the blockade are in place, the humanitarian conditions will only get worse. And our need to respond to that will get greater and the funding is getting less.