Thousands of Gaza residents have turned out to mourn the deaths of Palestinians killed by Israeli troops in Monday's protests. Germany and the UK meanwhile demanded an inquiry into the killings as diplomatic anger rises. 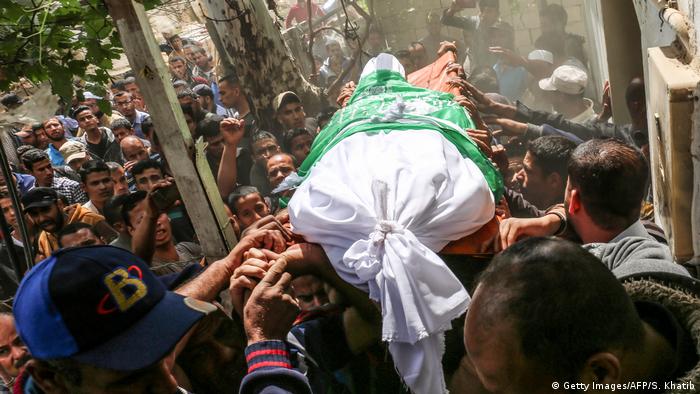 Some of the 60 Palestinians killed by Israeli troops in protests in Gaza on Monday were carried to their funerals through throngs of mourners in the Palestinian enclave on Tuesday during a lull in the weeks-long protests.

Many of the bodies were wrapped in the green flag of Gaza's ruling group Hamas, the yellow flag of the Fatah group in charge of the Palestinian Authority in the West Bank, and a black flag for the Islamic Jihad militant group.

Some of the mourners chanted "God is great" in Arabic and "Death to Israel" as they marched to the cemeteries.

Monday's protest was part of a weeks-long campaign by Hamas to break through an 11-year old border blockade separating Gaza and Israel. It also coincided with the opening of the new US embassy in Jerusalem.

On the Gaza-Israel border, Israeli forces prepared to face another day of Palestinian protest, after Hamas initially said mass border protests would continue on Tuesday, the day marking the 70th anniversary of what Palestinians call their "nakba," or catastrophe, when many lost their homes and land after the creation of the state of Israel in 1948.

Palestinian President Mahmoud Abbas on Monday called for three days of mourning after the bloodiest day for Palestinians since the 2014 Gaza conflict. The Palestinian Liberation Organization also pulled its representative from Washington in response to the Israeli army's violence and the US embassy move to Jerusalem.

Most of the 60 Gazans killed were shot by Israeli snipers and at least 2,700 others were wounded, among them 1,360 by gunshot, according to Gaza's health ministry. Of the wounded, it said that 130 were in serious or critical condition.

The Israeli Defense Force (IDF) said it was acting according to "standard operating procedures" and had sought to prevent a mass breach of protesters and Hamas militants into Israel.

It accused Hamas of using protests against the US decision as a cover for attacks on the border and said its aircraft had hit 11 "terror targets" in a Hamas military compound. The army also said Gaza activists used 10 explosive devices and firebombs against troops and that shots were fired at soldiers along the border.

It has said in the past that rubber-coated steel pellets are not effective in preventing Gaza demonstrators from approaching or breaching the border fence. But rights groups have said Israel's open-fire orders are unlawful under international humanitarian law.

Calls for an inquiry

After the US on Monday blocked the adoption of a UN Security Council statement calling for a probe into the violence, Britain and Germany on Tuesday called for an "independent investigation" into the violence.

"It is our view that an independent investigation commission can clarify the violent incidents and the bloody violations at the border area," said German government spokesman Steffen Seibert. He said that Hamas was also guilty of stoking the flames.

Alistair Burt, a minister at the UK's Foreign Office responsible for Middle East affairs, told parliament that the UK supported an independent investigation. He also called on Israel to show "greater restraint" in the use of live fire, and said that the inquiry should look into why so much was used.

However, he said it was "deplorable but real that extremist elements have been exploiting these protests," adding the government "understands the reasons why Israel would seek to protect its border and its border fence."

Burt repeated Britain's commitment to a two-state solution to the conflict and said it did not agree with the US decision to move its embassy.

The UN Security Council convened early on Tuesday to discuss Monday's violence and held a moment of silence for the Palestinians killed.

The draft statement, obtained by AP and others, would have expressed "outrage and sorrow" at the killings, calling for an "independent and transparent investigation," and for restraint on all sides.

Funerals for many of the 58 Palestinians killed by Israeli fire during the Gaza border protest will be held on Tuesday. Several countries, although not the US, have condemned Israel's violent response. (15.05.2018)