The EU has promised an extra €42.5 million to Palestinians for state-building efforts. The aid comes after the US decision to withhold millions in funding from the UN agency that supports Palestinian refugees. 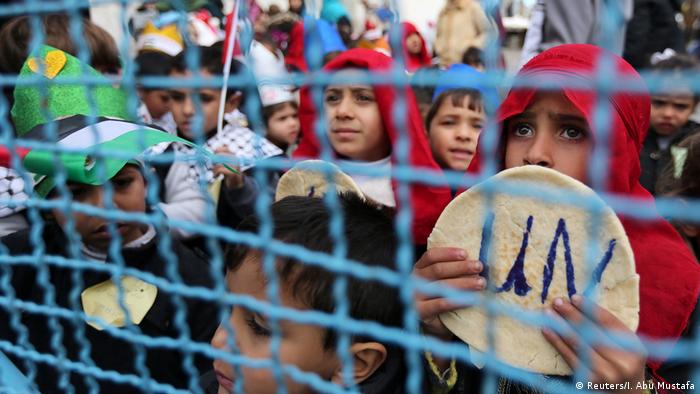 The European Union has pledged €42.5 million ($52.9 million) to support Palestinians, ahead of a high-level meeting in Brussels to address broken down peace talks.

The talks on Wednesday were to bring top Israeli, Palestinian, US and Arab officials and politicians together for the first time since US President Donald Trump made the controversial decision to recognize Jerusalem as Israel's capital in December 2017.

What the aid package includes

DW talks to director of UNRWA

EU 'most reliable and important donor'

Johannes Hahn, the EU commissioner for European Neighborhood Policy and Enlargement Negotiations, said the assistance package would "support the Palestinians on their way toward the establishment of their own state as part of the two-state solution, with Jerusalem as the capital of both Israel and Palestine."

"The European Union is, and will remain, Palestine's most reliable and important donor, investing in businesses, youth and schooling, helping to provide access to clean water in Gaza, strengthening civil society and investing on education and health," Hahn said.

On Tuesday, Pierre Krähenbühl, the commissioner general for the United Nations Palestinian aid agency UNRWA, appealed for more than $800 million (€645 million) to provide assistance such as food, water, shelter, medical support and education to 5 million Palestinian refugees and their descendants in Gaza, the West Bank and Syria.

Ahead of the talks in Brussels on Wednesday, EU foreign policy chief Federica Mogherini said: "The US is essential for any process to realistically have a chance to succeed," and called on the US "to understand that alone it will be more difficult to achieve anything." 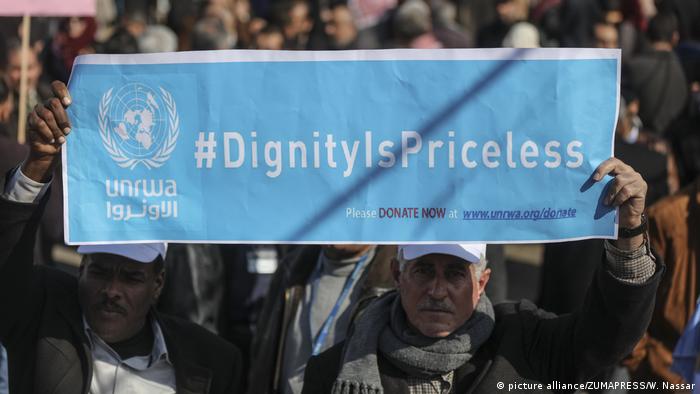 Palestinian UNRWA employees protest the US decision to reduce its funding on January 29, 2018 in Gaza

The Palestinians current funding situation: On 16 January, the US State Department announced it was withholding $65 million of a planned $125 million funding payment to the UNRWA. In 2017, UNRWA had a budget of $1 billion, of which the US contributed $360 million. In early January Trump had tweeted that Palestinians gave the US "no appreciation or respect" despite receiving millions of dollars in aid every year.

How much assistance does the EU provide to the Palestinians? The €42.5 million package is in addition to pre-existing funding of €158.1 million in direct financial assistance to support the Palestinian Authority in meeting its recurrent expenditure and the delivery of public services. Some €107 million was also provided to UNRWA and €18 million was provided for supporting productive investments both in the West Bank and in Gaza.

Read more: Germany and other donors speed up funding for Palestinians after US aid cut

Where else do the Palestinians get funding? Following Trump's decision to cut aid to the Palestinians, 11 countries made efforts to speed up their donations . Germany, Russia, Switzerland, Sweden, Norway, Finland and Denmark have already provided their complete annual donations, while Kuwait, the Netherlands, Belgium and Ireland have said they would deliver the full funds "very soon."

The US has vetoed a Security Council resolution on Jerusalem calling on all states to not establish embassies in the city. The measure expressed "deep regret at recent decisions concerning the status of Jerusalem." (18.12.2017)

US President Donald Trump threatens to withhold aid to Palestinians