US President Donald Trump threatens to cut aid to Palestinians

US President Donald Trump has tweeted the US may withhold aid money to the Palestinian Authority because it is "no longer willing to talk peace." A Palestinian spokesman responded that Jerusalem was "not for sale." 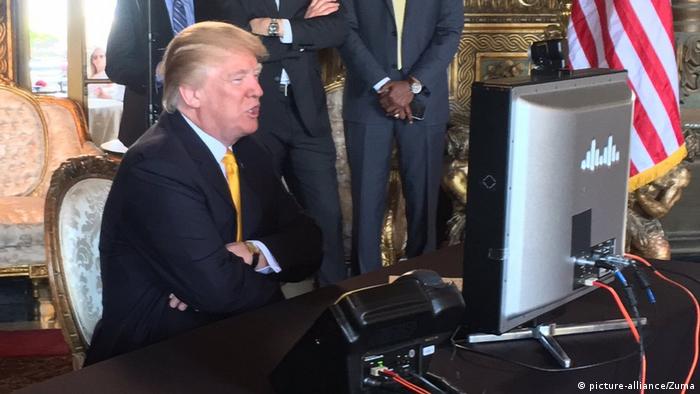 US President Donald Trump said on Tuesday that Washington gives Palestinians "HUNDRED OF MILLIONS OF DOLLARS a year and get no appreciation or respect. They don't even want to negotiate a long overdue peace treaty with Israel."

The US had budgeted $251 million (€210 million) in aid to the Palestinian-occupied West Bank and Gaza Strip in 2018, according to government data.

US Ambassador Nikki Haley said the US had given over $5 billion to the Palestinians since 1994, more than any other country. "The United States has never been more committed to peace in the Middle East."

Trump angered many allies and Arab states when he announced in December that the US would consider Jerusalem the capital of Israel and move its embassy there.

"Jerusalem is not for sale, neither for gold nor for silver."

"We are not against going back to negotiations, but (these should be) based on international laws and resolutions that have recognised an independent Palestinian state with east Jerusalem as its capital," he said in a separate statement to the AFP news agency.

The issue is perhaps the most problematic in the Israeli-Palestinian conflict, but, in another tweet, Trump said it was off the table.

Palestinian President Mahmoud Abbas has said Trump decision on Jerusalem had effectively disqualified the US as a peace broker between the Israelis and Palestinians.

Trump has long said he wants to find the solution to peace in the Middle East, calling it "the ultimate deal," but bids to restart negotiations — led by the president's adviser and son-in-law, Jared Kushner, have shown no progress so far.

In the past, Israeli Prime Minister Benjamin Netanyahu has committed to a two-state solution, but in 2015 said there would be no Palestinian state while he's in office. Trump also took an indifferent approach to the long-standing US insistence on a two-state solution during a February 2017 press conference with Netanyahu.

US-brokered talks between Israel and the Palestinians have been on hold since 2014. Should they resume, the requirement of a special Israeli parliamentary majority to approve handing over parts of Jerusalem will complicate efforts to reach an accord.

The Knesset, Israel's parliament, enacted a law early Tuesday making it much more difficult to negotiate Jerusalem as part of a peace process.

A spokesman for Abbas said it was a "declaration of war" against the Palestinian people and their identity.

"This vote clearly indicates that Israel has officially declared the end of the so-called political process and has already begun to impose dictating and de facto policies," said Nabil Abu Rudeineh according to Wafa, the official Palestinian news agency.

In mid-December, Trump threatened to withhold "billions” of dollars of US aid from countries that vote in favor of a UN resolution rejecting the president's recognition of Jerusalem as the capital of Israel.

Haley said on Tuesday she had vetoed the UN resolution demanding Trump rescind his declaration of Jerusalem as the capital of Israel "in defense of American sovereignty and in defense of America's role in the Middle East peace process." She added that Trump had taken "great care not to prejudge final status negotiations in any way."

A summit of Islamic nations has issued a unified response to counter the US recognition of Jerusalem as Israel's capital. Israeli Prime Minister Benjamin Netanyahu said he was "not impressed" by the declaration. (13.12.2017)