More than a million people were in Cologne for one of Europe's largest pride parades. With homophobic attacks on the rise in Germany, organizers made it clear that this year's event is pushing for political change. 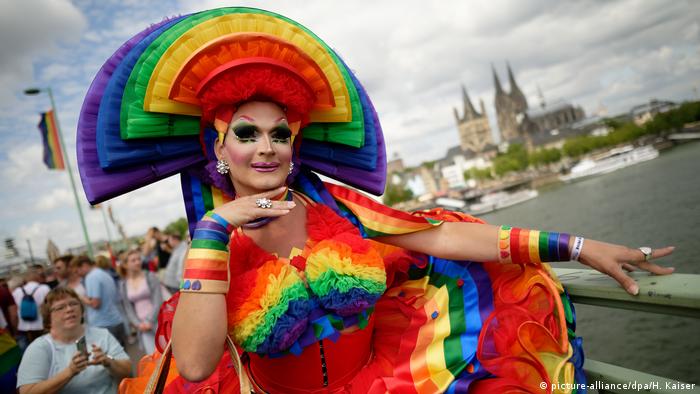 More than a million members of the LGBT+ (lesbian, gay, bisexual and transgender) community and their allies flocked to Cologne on Sunday to take part in one of Europe's largest pride parades.

The attendance for this year's Christopher Street Day parade, which marks the 50th anniversary of the Stonewall riots in New York, was similar to last year's, which saw 1.2 million people take part. 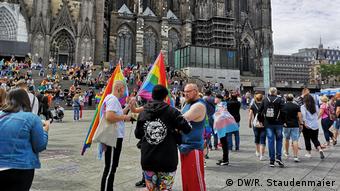 Around 150 different groups signed up to march in this year's parade. In contrast to other pride parades in Germany, organizers in Cologne have made their event a political demonstration, purposefully limiting the size of the floats to maintain its protest atmosphere.

But the parade was also a celebration of the city itself. Carnival songs were peppered into the parade performances, which wound through Cologne's old town. When asked what makes Cologne's parade so special in Germany, many were quick to answer.

"Cologne is more tolerant than other cities," said Birgit, a 55-year-old who is from the city.

"It's also more multicultural," added another woman, who gave her name as Hörnchen. "And," she joked, "it has better beer."

Both women said how important it was to come out to the parade and continue to push for equal rights, especially when it comes to LGBT+ parents.

In Germany, even if a lesbian couple are married, only the woman who gives birth is recognized as a child's mother. The other partner has to adopt in order to be given the same parental rights.

The parade was filled with loud music, lots of bubbles and even more free hugs. But it was a party with a message, with groups carrying signs calling for more action on climate change, more inclusion of trans- and intersex people and more awareness of people of color in the LGBT+ community.

Ina Wolf, a board member with parade organizers Association of Lesbians and Gay Cologne (KLuST), told DW it was important for the parade to remain a political demonstration.

"Here is where heterosexuals meet with the LGBTIQ* community to celebrate diversity and what we've achieved, but also to demand political changes that haven't yet been achieved," Wolf said.

"That's a big act of solidarity," she added. 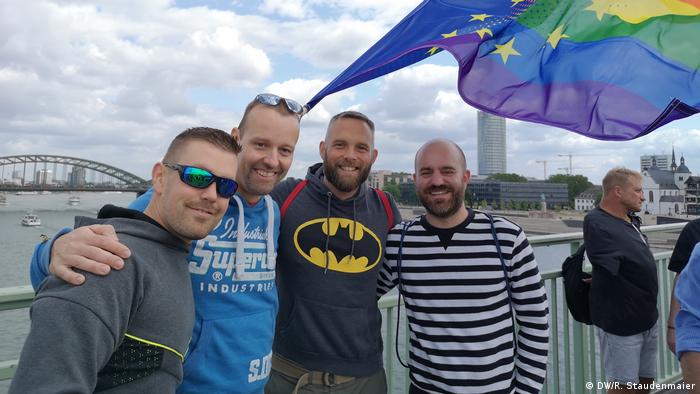 'The one thing we have to worry about is the AfD,' said these men in Cologne

Standing up to the far right

Up on the Deutz Bridge, where the parade kicked off, a group of men held a European Union flag with its colors merged with the rainbow flag.

When asked why they picked the flag, a man named Sebastian said it is "perfect and fitting" for today's event, because it's a symbol that "connects us."

They said that they're happy with the state of LGBT rights in Germany and that major gains had been made in the past few years.

"The one thing we have to worry about is the AfD," said Dennis, referring to the far-right Alternative for Germany political party, which has made gains in recent German elections.

The party has called for an end to marriage equality and pushed to bar broader sexuality discussions from German classrooms.

Lesbian, gay, bisexual, transgender and intersex people are increasingly the targets of violence in Germany, with homophobic attacks increasing by as much as 30%, according to German government data released earlier this year.

Parade organizer Wolf told DW that those attacks are linked to the rise of the far right.

"This year's motto of 'Many.together.strong' reminds us that we have fought for a lot and also that we will not back down in the future against neo-Nazis and their friendly right-wing populists in the German and European parliaments," she said.

This year marks the 50th anniversary of the Stonewall Riots that sparked the gay pride movement. 2019 also marks 100 years since the first movie to deal with homosexuality, which caused an uproar back then. (28.06.2019)

Police have used tear gas to disperse hundreds of people at a banned gay pride march in Istanbul. Activists had gathered to promote rights for gay and transgender people. They had hoped the ban would be lifted. (30.06.2019)