Although homosexuality is no longer classified as an illness in Germany, some therapists still try to "cure" gays and lesbians. LGBT activists have fought for a ban on such practices, and have met with success. 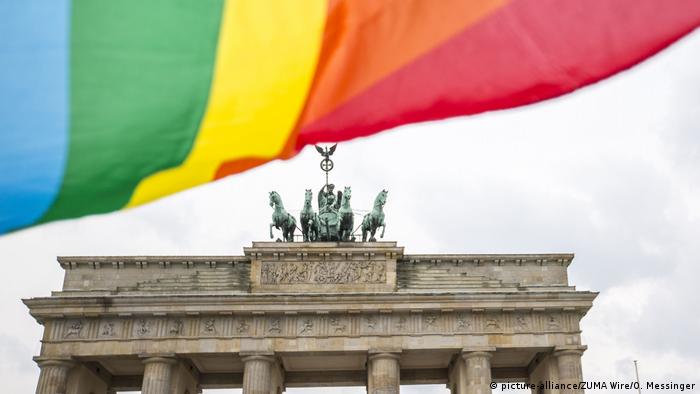 Lucas Hawrylak, a 26-year-old student from Berlin, launched a petition in mid-2018 to ban so-called conversion therapy in Germany. To date, he has collected more than 80,000 signatures — and has become the country's most well-known LGBT activist.

The petition calls on the German government to ban "conversion therapy," a practice that aims to "cure" gays and lesbians of their sexuality. Doctors use the practice to attempt to convince patients that they aren't gay, and urge them to try a heterosexual relationship. They use various techniques, including electroshock therapy, aimed at making patients develop negative associations with gay sex.

The practice is associated mostly with the conservative evangelical church movement in the United States where, according to estimates, almost 700,000 people have attempted such "therapy" — more than half of them children and adolescents.

'Homosexuality is not an illness'

LGBT people continue to face prejudice and discrimination in Germany as well. A 2017 study by the Federal Anti-Discrimination Agency showed that 18.3 percent of Germans still regarded homosexuality as "unnatural," with 9.7 percent believing it to be "immoral."

Any attempt to forcibly change a person's sexuality could "lead to personality and identity disorders, to depression and to self-harm," said Uwe Wetter, a former vice president of the Association of German Professional Psychologists, who has worked as a psychotherapist for more than 30 years. 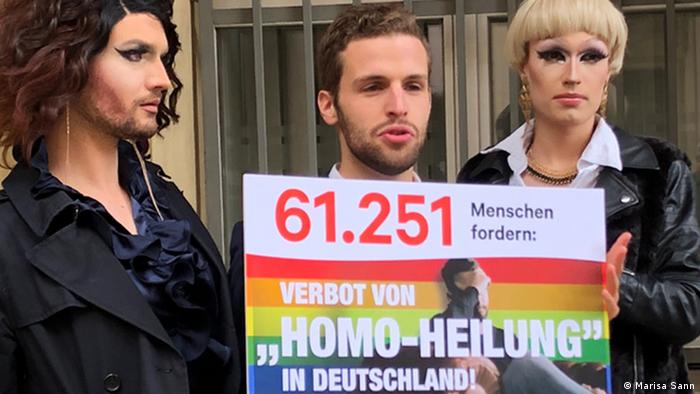 By October, Hawrylak (center) had already collected more than 61,000 signatures

Conversion therapies are at odds with the scientific consensus among doctors and therapists. And yet, the practice is still offered in Germany by priests and other pastoral workers — as well as trained doctors and psychotherapists.

Despite this, the German government announced last July that it wasn't planning to ban the practice following calls from left-wing opposition parties.

Lucas Hawrylak refused to accept this decision and started his petition, which would quickly turn into a mainstream campaign to ban the so-called practice of "homo-healing."

Numerous gay rights organizations soon joined the campaign, among them Active Alliance Against Homophobia, Enough is Enough, All-Out and Travestie für Deutschland, a pun on the right-wing Alternative for Germany (AfD) party. The growing movement has used both traditional and social media to promote its cause.

"We want an explicit ban on conversion therapy for children and adolescents," said Hawrylak. "In addition, conversion therapies should no longer be allowed to be advertised anywhere on the internet."

Health Minister Jens Spahn, of Chancellor Angela Merkel's conservative Christian Democratic Union — himself openly gay — said in an interview with left-wing German daily taz earlier this year that he wanted to have "a government proposal agreed on by the summer" with his ministerial colleagues, stressing that he wanted to make the practice illegal as soon as possible.

And there appears to be cross-party support for the ban. Even the far-right AfD — which has previously called for the abolition of same-sex marriage — has rejected the practice. "We are open to a legal ban on conversion therapies," said the group's health policy spokesman, Axel Gehrke.

Should the ban come into place, Germany could become a forerunner in Europe. Currently, Malta is the only EU country with a nationwide ban; those who conduct the practice there face a fine of up to €10,000 ($11,350), or one year in prison.

Jens Brandenburg, the spokesman for LGBT issues for the Free Democratic Party, told DW that the prohibition should extend beyond Germany: "It's time for a Europewide ban on inhuman conversion therapies, especially for minors."