This year marks the 50th anniversary of the Stonewall Riots that sparked the gay pride movement. 2019 also marks 100 years since the first movie to deal with homosexuality, which caused an uproar back then.

Several events this year commemorate the emergence of the gay pride movement.

The first major gay uprising against police took place 50 years ago, on June 28, 1969 at the Stonewall Inn bar on New York's Christopher Street — which sparked the very first Christopher Street Day (CSD) parade on the first anniversary of the riots. CSD parades are meanwhile a regular phenomenon around the world.

Another anniversary: a hundred years ago, on July 6, 1919, Magnus Hirschfeld, a gay sexual reformer, opened the Institute for Sexual Science in Berlin. The first of its kind in the world, it aimed to "promote scientific research of sexual life."

That same year, the first feature film to openly deal with the issue of homosexuality was screened in German movie theaters: "Anders als die Andern" (Different from the Others), directed by Vienna-born Richard Oswald. He had already directed films dealing with prostitution, rape and abortion, but with homosexuality a taboo topic, the filmmaker faced harsh criticism even before it was first shown on May 28, 1919, and the audience was up in arms at the premiere. 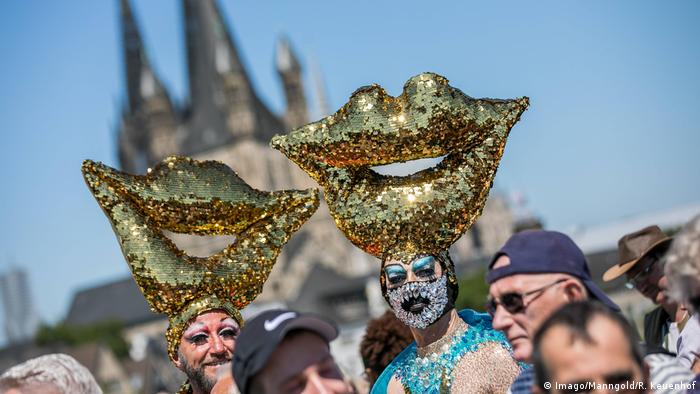 At the CSD parade 2018 in Cologne, Germany

For "Anders als die Andern," Oswald had an important advisor: Magnus Hirschfeld, and the scholar and researcher acted in the film.

In the storyline, a violinist has a relationship with his student and is blackmailed by a male prostitute. In the enusing court case, Magnus Hirschfeld appears as himself, delivering a passionate appeal for the repeal of Paragraph 175, which since 1872 had prohibited sexual relations between men. The film ends with the suicide of the musican, portrayed by actor Conrad Veidt. The trial has made him a social outcast, and he no longer sees a future for himself.

Both Oswald and Veidt had been subject to threats during the filming. Both were Jews, along with actor Kurt Sivers, who played the role of the student. The resultant backlash, mostly from the right end of the political spectrum in Germany, included anti-Semitic screeds.

The film is said to have provoked the introduction of film censorship the following year. Oswald's film was banned, all copies were destroyed, and only fragments survived that were later reconstructed.

Richard Oswald died in Düsseldorf in 1963. "Anders als die Andern" is considered the most important silent film on the subject of homosexuality, and its progressive stance makes it seem modern even today.

Interestingly, not quite a century after its premiere, it was another German director, Roland Emmerich, who filmed the events in 1969 that led to Christopher Street Day. His film "Stonewall" premiered in movie theaters worldwide in 2015.

The city was full of festive crowds and decked out in rainbow flags with the Star of David. But with memories of a murder during the 2015 march still fresh, thousands of police were in attendance at this year's parade. (06.06.2019)

100 years of homosexuality in film

Many Hollywood stars play homosexuals or lesbians these days, but acceptance of the topic was far from a given before the gay rights movement. A look at homosexuality in films since 1919. (28.06.2019)