It’s the 50th anniversary of the Stonewall uprising. The riots and ensuing protests are credited with spurring the US gay rights movement, but five decades later, those who were there say there's more work to do.

When the patrons of New York's Stonewall Inn drank and danced their way into the small hours of June 28, 1969, they likely had no idea they would one day become icons of the modern-day LGBT+ movement. It is hard to imagine that sparking an uprising would have been the order of a hot summer's night in Greenwich Village. There would have been other things to do: meeting like-minded people, relaxing, flirting. The type of things heterosexual New Yorkers could do at any bar of their choosing without a second thought.

But when police raided the mafia-run gay bar for the second time in a single week, something snapped. A collective consciousness seemed to take hold, as exasperated patrons cornered a group of officers, taking a stand against police abuse.

"It was the first time our community imprisoned the police, who had always imprisoned us before," remembers Mark Segal, who was among those who had decided enough was enough. Together, they fought back, first throwing coins, then bottles, then bricks. The Stonewall Inn was set ablaze and the pandemonium triggered protests which lasted for days. It was a watershed moment. The LGBT+ movement had been nascent for close to a decade. Now it was on the national map.

The morning after the riots, Karla Jay took the subway down to Christopher Street to survey the scene. She was 22 at the time and not at ease being "out" in public.

"We had to be secretive at school, at work, in front of our parents, in front of landlords. If people found out, we were felons and we could lose everything," she explains.

Although used to being cautious herself, Jay was surprised by what she found at the Stonewall Inn. "There was a sign in the window with white letters telling people to keep the peace and go home," she says. There's still a note of incredulity in her voice, as she retells the story 50 years later. "To me, being calm and going home just didn't seem to be the thing to do." 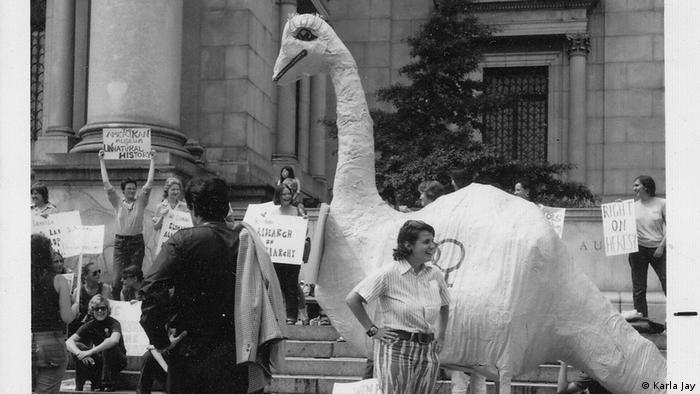 Her resolve was hardened. Soon after the protests she became a founding member of the Gay Liberation Front and its first female chair. Advocating for equal rights, the group had much to achieve. At the time, every state but Illinois had outlawed sex between two people of the same gender, and homosexuality was classified a mental disorder. Violence and harassment were commonplace.

"There was a law against what they called masquerading," Jay recalls. "You had to wear three pieces of clothing appropriate to the sex into which you were born. If not, they could pull you into the bathroom or coatroom, strip you, count your clothes and arrest you."

The Gay Liberation Front set about changing that, and their tactics were manifold: In 1970 they organized the first gay pride marches. They picketed publications like The New York Times and Time magazine, demanding they print the word "gay," which was considered offensive at the time. They stormed onto TV sets, taking over shows, in an action they called "zapping."

"We've made amazing progress," acknowledges Jay. "For one thing we never thought we would have marriage equality." 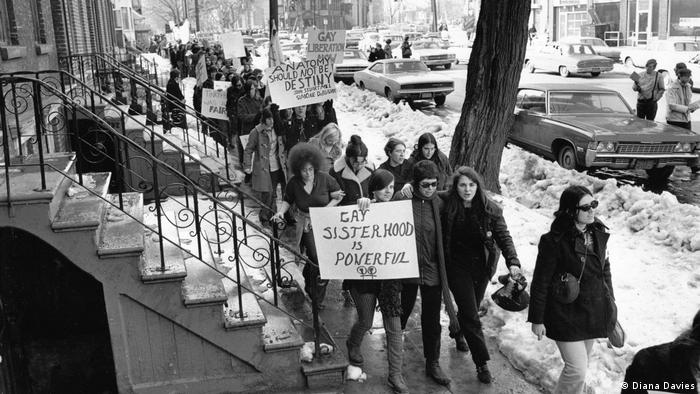 But that is far from enough to placate a pioneer of LGBT+ rights. "Look, you can be married on Sunday and fired on Monday. A lot of civil rights are still lacking in this country."

Today the fights for those rights are being waged elsewhere, if not far from the Stonewall Inn. Just around the corner is Saint John's Lutheran Evangelical Church, its cream facade decked out in rainbow bunting. A sign outside the gates implores passersby to "fight for the powerless, embrace diversity." It comes almost in direct riposte to the religion question that still looms large in debates about nondiscrimination protections for LGBT+ people, which religious conservatives argue infringe on the beliefs of those who oppose same-sex marriage and transgender rights.

It is a concern echoed by lay members of society, too. "I took a cross-country trip with my partner two years ago and we were discussing how, as we drove state to state, our rights drastically changed," explains KC Hankins, chair of the LGBT+ caucus of the New York Young Democrats. Currently the majority of states do not have a law protecting LGBT+ people from discrimination in employment, housing or access to public services. "And that's two gay men," he adds, "not to mention trans people, or trans people of color. They are being killed at exceptionally high rates."

It is the "T" in LGBT+ rights that apparently requires dramatic progress. This year 10 trans women of color were murdered in the United States. Last year, it was 26. The American Medical Association has sounded the alarm over an epidemic of hate crimes at a time when progress on transgender issues is far from linear: Trump's administration has revoked newly won health-care protections for transgender people, restricted their presence in the military and withdrawn federal guidance that trans students should be able to use bathrooms of their choice. 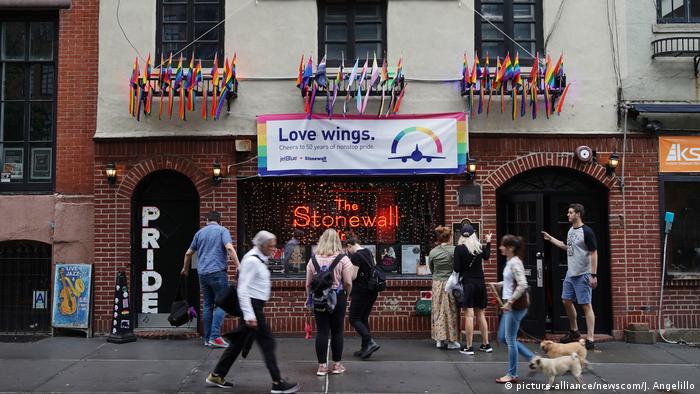 The Stonewall Inn has become a site of pilgrimage

"They are starting with the trans community but once they are done, they'll go after everyone else," warns a transgender woman, who did not want to be identified, fearful of the current climate. "And where's Marsha? You don't even see her down here."

She is talking about Marsha P. Johnson — or rather the fact that there is no statue for the transgender activist, whose role in the uprising has been hailed as instrumental. A woman who was known for her homemade outfits, her hair wreathed in flowers, fruit and fairy lights, and standing up for the lesbian and gay community. The Stonewall legend has it that she was the one to throw the first shot glass that fateful night. It is hard to fathom how her story — and that of so many other transgender people of color — could have been marginalized from the very movement they helped create.

Still, for now, as New York gears up to host World Pride, the site of the Stonewall Inn is swarming. "It's like Disneyland," Karla Jay quips — and indeed, there is a certain irony: Where once, LGBT+ people calculated the risk of being caught, today hundreds of thousands of tourists are eager to pose for their photo outside the bar. But they are photographing a now ageing battlefield. There are many more out there, just out of view.

Can companies be an ally in the fight for LGBTI equality?

As Pride season kicks off, the economic benefit of LGBTI acceptance for countries and companies seems to be more evident than ever. Yet is it only about rainbow money? (12.06.2019)