Cities leading the transition to renewables | Environment | All topics from climate change to conservation | DW | 09.03.2018 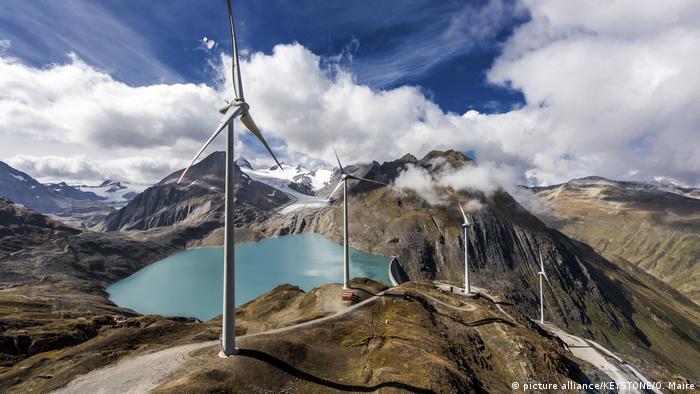 Cities are responsible for 70 percent of manmade CO2 emissions, according to the International Renewable Energy Agency. Cars, heating, cooling and lighting systems work round the clock, consuming energy and pumping out emissions.

But more and more cities are aiming to source a growing share of that energy from renewables, to become more sustainable and, ultimately, combat climate change.

Around the world, 570 cities have reported their achievements to non-profit group CDP. CDP says over 100 of them get least 70 percent of their electricity from renewable sources, and more than 40 already have a 100-percent renewable power supply.

That might sound impressive. But, electricity isn't everything — cities also consume huge amounts of energy from heating and transport, for example.

Moreover, "renewable" doesn't always mean environmentally sound. Most of the 40 high achievers get their electricity from hydropower plants, which are controversial due to the environmental impacts of dams, and fears that hydropower generation is being hit by climate change. 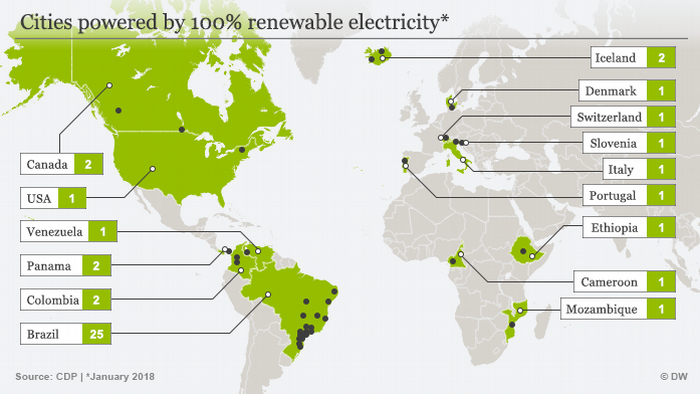 Half the world's human population lives in cities, and at least 90 percent of people in urban areas live with air quality that falls short of World Health Organization standards.

There's clearly much to be done to reduce urban toll on human and planetary health. But CDP says the data cities have submitted show they're making a start.

More than 80 cities and towns in the United Kingdom have pledged to go 100-percent renewable by 2050 as part of UK100, a local government leaders' network.

Many other European cities are moving towards renewables, not only for electricity but also for heating and transport, Eric Woods, research director with Navigant Research, a green energy tech consultancy, told DW.

Falling green power prices are helping drive this transition. In 2017, unsubsidized renewables were the cheapest source of electricity in 30 countries, and renewable energy is predicted to become far cheaper than energy from fossil fuels by 2020.

Despite US President Donald Trump's resistance to the energy transition  — or perhaps, in part, because of it — US cities are redoubling their efforts, too.

Across the country, 58 cities have committed to going 100-percent renewable. Of these, 46, including big cities like Atlanta and San Diego, only pledged after Trump's election.

The Global Covenant of Mayors for Climate and Energy has also been a major push for local urban energy transitions, seeing more than 7,000 cities and local governments around the world agree to act on climate change.

Three US cities, including Seattle, get at least 70 percent of their electricity from renewable sources — although again, hydropower is the main one.

Burlington, Vermont, gets all its electricity from a mix of biomass, hydro, solar and wind power, CDP data shows andaccording to the Sierra Club, it's not alone. Aspen (Colorado), Greensburg (Kansas), Rock Port (Missouri) and Kodiak Island (Alaska) may be small, but they too have completely given up fossil-fueled electricity.

The road to renewables needs adequate governance. Some cities — for example those that own their own municipal utilities, like Basel and Copenhagen — have more power over where they get their energy from.

"Cities need more control over their energy production and stronger support for local generation," Woods said. Local authorities are often more active than national ones, but they are also limited by national energy policy.

Different cities have different resources available to them. In Geneva, the city's lake is used to cool and heat around 400 buildings, including the United Nations' headquarters, Alix Bolle, EU affairs manager with Energy Cities told DW.

But while not every 100-percent renewable city will look the same, their localized transitions are a chance to try out different solutions, and learn from each other's experience.

Initiatives like the UK100 andRenewables Networking Platform , promoted by the European Forum for Renewable Energy Sources, encourage such exchange.

"Cities are very much willing to learn from each other and replicate solutions or ways of overcoming risks," Bolle said.

It's also important that the energy transition is an inclusive process, the Intergovernmental Panel on Climate Change recently stressed, bringing the public and local industry into decision-making to ensure everyone does their bit.

Carina Borgström-Hansson, responsible for WWF's One Planet City Challenge, told DW that involving the local private sector means the energy transition can stimulate entrepreneurship and job creation. She points to Vancouver, Canada, which she says included local businesses in a strategy that has seen the city achieve a 98-percent renewable electricity supply.

Reshaping the energy system obviously involves serious investment in infrastructure. But there are also simple things we can all do to decarbonize our cities.

Electrification of the transport system is very important, Borgström-Hansson said, but we can all make an effort to take more journeys by bike or foot.

At the UN climate conference in Bonn, an alliance of 20 countries pledged to rapidly phase out coal in the coming years. Germany has not joined the group — although the reasons for abandoning coal seem to be oiling up. (19.11.2017)

The Vjosa in southern Albania is the last free-flowing river in Europe and is crucial to thousands of livelihoods. But the Balkan frenzy over hydropower threatens the future of the entire valley. (24.08.2017)

Over the years, DW has reported on creative and sustainable ways of generating renewable energy. Now we've compiled the top concepts - which represent a boost of hope toward a more sustainable world. (12.04.2016)