Water power is the largest renewable energy source in the world, but some plants are running out of water due to severe droughts. Is climate change jeopardizing the future of hydropower plants? 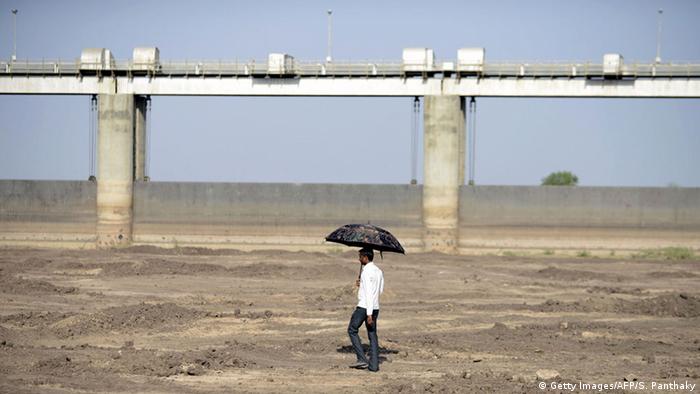 Civilizations have used water as a source of energy for millennia, and it has been used to generate electricity for nearly 150 years.

But building hydroelectric dams also reshapes ecological systems, inundates landscapes, and has forced millions of people to abandon their homes.

And now, water power faces an added complication: Climate change means some countries are experiencing severe droughts and reservoirs are drying up. 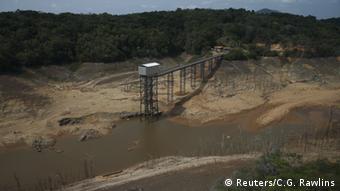 The Guri dam in Venezuela during a drought in 2016

"We cannot avoid the fact that climate change is having a remarkable impact on hydropower generation and it increases the challenge of managing hydro plants," Clemente Prieto of the Spanish Committee on Large Dams, told DW.

This is a serious concern for southern and eastern African countries.

Malawi relies on hydropower for 98 percent of its electricity supply. Last year, it suffered prolonged blackouts. According to the World Bank, less than 10 percent of Malawians have access to a power supply anyway, but key public infrastructure, such as hospitals, was badly hit.

Hydropower makes up 95 percent of Zambia’s power supply — most of it from Lake Kariba, the world's largest man-made reservoir. But due to El Nino in 2016, water levels dropped to 13 percent of their usual capacity, Daisy Mukarakate, climate change program specialist with the United Nations Development Program Africa (UNDP), told DW. 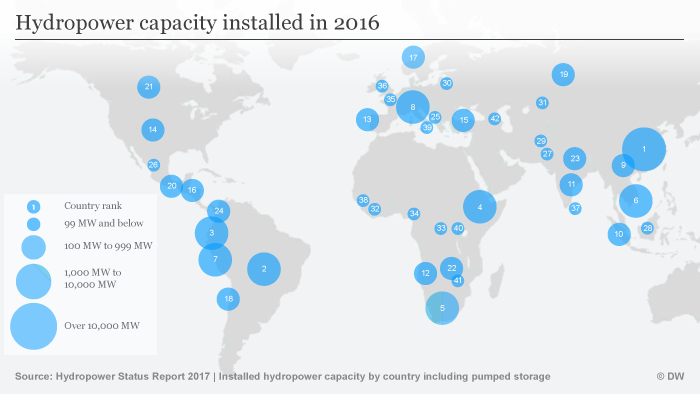 Richer countries have been hit too. Following four years of severe drought, a shortage of hydropower meant California had to use more gas to cover its electricity demand. That cost more than $2 billion (€1.6 billion) and led to a 10 percent rise in CO2 emissions, according to the Pacific Institute for Studies in Development, Environment, and Security.

In other words, Californians had to pay more for dirtier power.

In Spain, hydropower generation fell by half from 2016 to 2017, meaning more fossil fuels were burned and CO2 emissions shot up by 40 percent. Latin American countries like Venezuela, Colombia and Brazil have had similar experiences.

Yet despite uncertainty about our future climate, reservoirs are still being built around the world.

Brazil is planning to build several dams, including over 40 in the basin of the Tapajos River — one of the most biodiverse places on the planet. The project has come under intense criticism for the impact it will have on local wildlife and indigenous human populations.

But Greenpeace says that with many countries seeing their hydropower production decline, the Tapajos project is even more questionable. "Why would a country whose energy security is already compromised by overreliance on hydropower aim to increase that reliance still further?" a Greenpeace report reads.

Instead, Greenpeace proposes a combination of wind, solar and biomass, which it says will, in the long term, be cheaper and more efficient, as well as far less destructive.

UK researchers say that if all plans currently on the table for new hydropower plants in eastern and southern Africa were fulfilled, the risk of power shortages could increase, since most rely on the same scarce rainfall and would suffer a drop in generation at the same time.

Still, experts like Michael Taylor, senior analyst on renewable energy with the International Renewable Energy Agency (IRENA), told DW Africa still has a lot of hydropower potential, and with such high demand for renewable energy, it cannot be ignored.

"There is a huge energy deficit in Africa and we cannot throw away options if we want to overcome underdevelopment," said Mukarakate of UNDP.

But it is important to plan with projected changes in regional weather in mind, and to consider the type of facilities that will be most efficient.

In Spain, which already has more than 1,000 hydropower dams, Eva Hernandez, head of the water and agriculture program with WWF Spain, told DW the focus should not be on building more, but improving the ones the country has.

Hydro: one piece of the puzzle

Some are several decades old and need repair. But there is also scope to develop some conventional hydroelectric dams — which use the potential energy of water stored behind a dam by releasing it in a controlled way to drive a turbine — to include pumped storage capacity.

Pumped storage uses electrical power to pump water from a reservoir at a lower elevation to a higher one. Then, when the power is needed, it's released again. As such, it tackles one of the problems with fluctuating renewable power — storage — and boosts its integration into the grid, Hernandez says.

Unlike fossil fuels, solar and wind power aren't produced to schedule or according to need, but depend entirely on the weather. Pumped storage is a way to convert excess power into potential energy, then back into electricity, on demand. 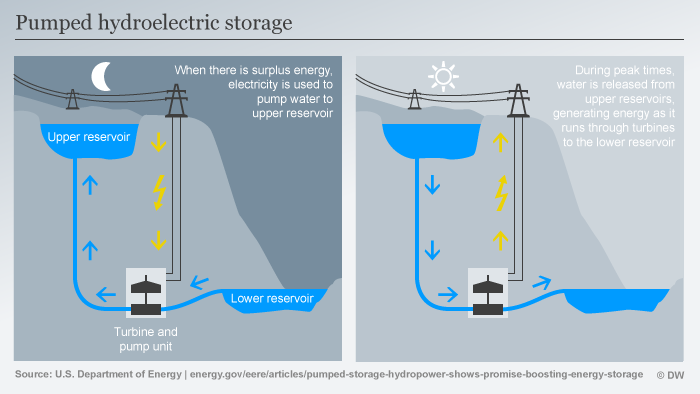 Taylor says hydropower shouldn't be seen as an alternative to other renewables, but as a compliment to them, making the entire energy system more efficient and the power supply more secure.

The future energy system has to be renewable, but Mukarakate says we still need to preserve a healthy mix of different energy sources.

"If we keep depending only on one source like hydropower, vulnerability will stay very high," she says. "We have to bring all the options together — biomass, wind, solar, biofuels, etc."

Focusing on the system as a whole is also key to a more secure supply for the African countries already being hit by reduced rainfall. Taylor says connecting up national grids means if one country is struggling with its power supply, it should be able to draw on that of a neighboring country to make up the shortfall.

Ultimately, a greener energy supply is the solution to its own problems — the sooner we stop burning fossil fuels, the more stable our climate will be.

Energy on the go - the world's smallest hydropower plant

Sick of your phone running out of battery? Now you can use a mini water turbine to charge it up! The German design is already in demand from African communities wanting to generate their own hydropower. (17.03.2017)

Again, a Honduran environmental activist was recently murdered - another name on a long list. But only after the death of high-profile activist Berta Caceres has the struggle gained international attention. (18.03.2016)