China's Xi wants US trade deal but can 'fight back'

The Chinese president said he wants to strike a deal with the US but is "not afraid" of a trade war. Fears that talks could collapse grew after US lawmakers passed a bill backing protesters in Hong Kong. 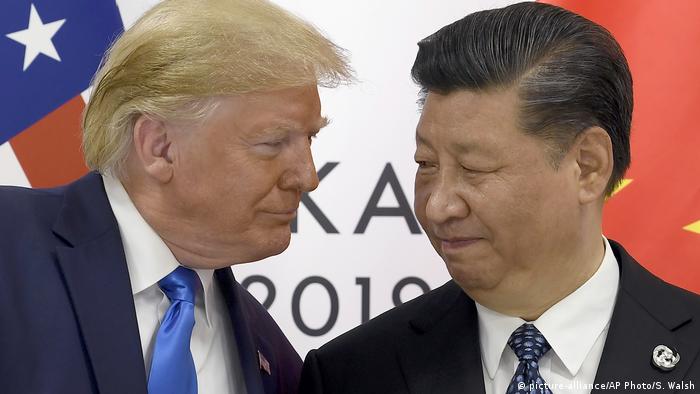 Chinese President Xi Jinping said on Friday that China holds a "positive attitude" toward trade talks with the US, but would "fight" to get the best terms.

"As we always said we don't want to start the trade war but we are not afraid," Xi said, responding to questions from representatives of the New Economy Forum, held at the Great Hall of the People in Beijing.

"When necessary we will fight back, but we have been working actively to try not to have a trade war," he said. He added that the nation was working towards a "phase one agreement on the basis of mutual respect and equality."

China and the US have been locked into an extended trade war for more than a year, over what the US viewed as China's unfair protectionist policies and intellectual property theft.

The countries have hit each other with heavy tariffs and regulations that have cost each nation billions of dollars.

Heading towards a 'phase one' deal

The two superpowers were hoping to agree a "phase one" deal, announced by Trump on October 11, but since then progress has again stalled with no written text being finalized.

Phase one was supposed to be a mini-agreement to resolve disagreements over intellectual property as well as agricultural trade.

Top negotiators from the US had a "constructive" conversation with their Chinese counterparts on Saturday over the preliminary deal.

However, on Wednesday Trump stated "I can tell you this. China would much rather make a trade deal than I would," and added, "I don't think they're stepping up to the level I want."

Tensions in Hong Kong have also cast a shadow over US-China relations in the past weeks with China cautioning the US to stay out of what it considers domestic affairs.

The warning came after the US House of Representatives passed the Hong Kong Human Rights and Democracy act.

The bill specifies that the US would withdraw Hong Kong's special trading status if it did not retain sufficient autonomy from China.