In a nod to pro-democracy protesters, US Congress has passed two bills supporting human rights in Hong Kong. China has threatened unspecified countermeasures if the bills become law. 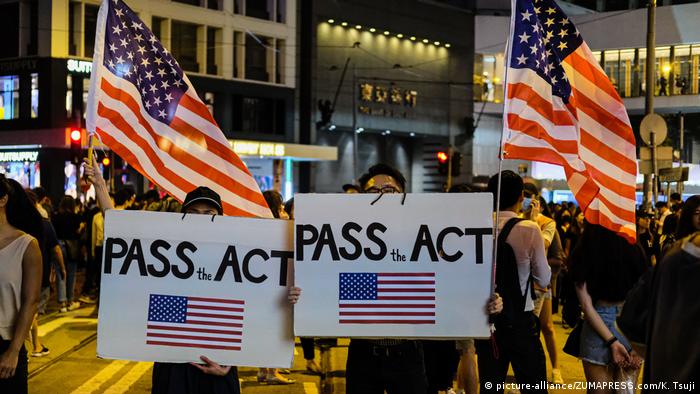 China urged US President Donald Trump on Thursday to veto two bills designed to support human rights in Hong Kong, renewing a threat to take unspecified retaliatory steps if the bills are signed into law.

"This bill sends the wrong signal to those violent criminals and its substance seeks to throw Hong Kong into chaos or even to destroy Hong Kong outright,'' Foreign Minister Wang Yi said Thursday during a visit from US Defense Secretary William Cohen.

"If the US continues to make the wrong moves, China will be taking strong countermeasures for sure," Foreign Ministry spokesman Geng Shuang said.

US lawmakers on Wednesday overwhelmingly passed the two bills, sending a warning to China over eroding freedoms in the semi-autonomous territory that could strain US-China trade talks.

The House of Representatives passed The Hong Kong Human Rights and Democracy Act by 417 to 1, a day after the Senate unanimously adopted the measure that backs protesters in the territory that has seen nearly six months of pro-democracy demonstrations.

The legislation, which drew anger from Beijing when it cleared the Senate, requires the US State Department to annually review whether the semi-autonomous Chinese territory retains enough freedoms to qualify for special trade status that helps support the city's status as a financial center.

The measure now heads to Trump for a signature. The White House has not said whether the president will approve the bill, but it enjoys a veto-proof majority in Congress that will likely factor into Trump's calculation.

The House also unanimously passed a bill, which was also unanimously backed by the Senate on Tuesday, that would ban the sale of crowd control devices such as tear gas, pepper spray, rubber bullets and stun guns.

Hong Kong's turmoil nears six months of increasingly violent pro-democracy protests triggered by a now-shelved bill that would have allowed extraditions to China. The protests broadened into a movement calling for democratic reforms, and has been driven by concerns that China is encroaching on freedoms in Hong Kong that are not enjoyed on the mainland.

Sieren's China: Beijing is coy about plans for Hong Kong

There's an apocalyptic feeling in Hong Kong. Dialogue between the city-state's government and the protesters seems further off than ever. DW's Frank Sieren says officials don't seem to have the will to find a compromise. (20.11.2019)

Strife-torn Hong Kong's economy plunged into recession in the third quarter, falling 3.2% between July and September. Its administration blames "local social incidents" — a reference to 5 months of pro-democracy unrest. (15.11.2019)

The months-long unrest in Hong Kong has been escalating over the past few weeks. Mainland China's state-run media sharply criticize the protesters' actions and also blame Western media for their "biased" reporting. (19.11.2019)