Tariffs the sticking point in US-China trade negotiations | Asia | An in-depth look at news from across the continent | DW | 11.11.2019

China and the US appear to have different views on the details of a still-unagreed trade deal. The tit-for-tat tariffs are hurting both countries and economist Jeffrey Schott told DW both sides hope for a ceasefire. 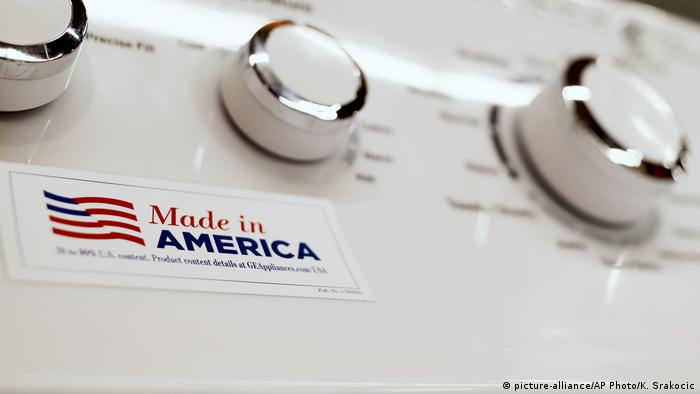 Chinese and US authorities have released conflicting statements on rolling back tariffs as part of a new trade deal that aims to end the trade dispute that started between the two nations in mid-2018.

Chinese Commerce Ministry spokesman Gao Feng last week said the two countries had "agreed to cancel the tariff increase in stages," but this statement was contradicted by US President Donald Trump on Friday, who told reporters: "They'd [China] like to have a rollback but I've not agreed to anything."

The details of any agreement will likely be influenced by the upcoming US presidential election, with Americans set to head to the polls in less than a year. Trump has made confronting China a signature issue for his re-election campaign.

Prior to Friday's comments, Trump and his negotiators had been quiet on the details of the negotiations. Trump has repeatedly stated that he is confident that the deal will benefit American economic interests, especially in regards to agricultural products, and will be signed shortly.

Trump had hoped to announce the deal at an international conference this month in Chile; however, the conference was cancelled following protests. Both sides have said that a new venue and date for the announcement is being sought out.

'Both sides are hoping for a ceasefire'

The trade dispute started with Trump's announcement in 2018 that the US would be applying 25% tariffs on $50 billion (€45.3 billion) of imported Chinese goods. The Chinese government retaliated with retaliatory tariffs on $50 billion of US imports. Tit-for-tat tariff increases have continued since, with the final installment of tariffs taking effect in September. An additional $250 billion in tariffs set to go into effect on October 15 were cancelled by the Trump administration in anticipation of a deal.

These aggressive tariffs have been the go-to tool for Trump, who promised to confront China's rising economic power during his 2016 presidential campaign. The US's trade deficit with China was one of Trump's main critiques of the relationship as America imports billions of dollars more in Chinese goods than China does US goods. Other issues Trump has raised, like intellectual property rights and currency manipulation, are not likely to be addressed in preliminary agreements.

Jeffrey Schott, an economist at the Peterson Institute for International Economics in Washington D.C., believes that that this trade dispute — including the tariffs — will continue to affect the world economy for the foreseeable future, especially with the US entering an election year.

"I suspect that tariffs on a substantial share of bilateral US-China trade will remain in place until the end of 2020," Schott told DW.

Based on his discussions with colleagues in China and the US, Schott thinks that both leaders are keen to get an agreement signed right now in order to reassure their constituents at home.

"At this point, both sides are hoping for a ceasefire," said Schott.

'Both sides are losers'

CNBC, an American news broadcaster, performed an initial analysis of the economic impact of the trade dispute for the first nine months of 2019. It found that economically, both sides have been hurt by the tariffs.

"The latest data shows that economically, both sides are losers. Compared with the first nine months of last year, trade data released Tuesday showed US imports from China have fallen a sharp $53 billion. US exports to China are down just $14.5 billion," said CNBC in an article published on November 5.

The reason the monetary value of losses is much higher for China, CNBC explained, is that the US imports more Chinese goods than vice versa. But the effects of the tariffs on less quantifiable aspects of the economy are also causing worry.

"The biggest concern that I have is not the immediate impact of the tariff but the impact it is having on investor decisions," Schott told DW. "This could continue to be a drag on growth, not only this year but it's going to be baked into the cake and constrain growth for many years to come."

In Trump's world 'rules are meant to be bent or broken'

Chinese Vice Premier Liu He led the delegation from Beijing that visited Washington in October where he met with US Trade Representative Robert Lighthizer and Treasury Secretary Steven Mnuchin.

"The Chinese side has come with great sincerity and is willing to make serious exchanges with the US on issues of common concern such as trade balance, market access and investor protection, and promote positive progress in the consultations," Liu told Chinese state-run media agency Xinhua at the time.

Trump's main focus is to commit China to buy $40 billion to $50 billion of American agricultural products per year. This would be a significant increase to the estimate $25 billion the US sold to China in 2017.

Geng Shuang, a Chinese Foreign Ministry spokesman, confirmed that the increased purchase of American farm goods is on the table. "What the US is saying is the actual situation, which is consistent with what we know," he said.

Regardless of how the negotiations evolve in the short term, Schott fears that any potential agreement between the US and China may not have the desired positive effect on the markets that both sides are hoping for. Trump's choice to increase tariffs on Chinese goods, which were themselves products of previous trade negotiations, shows that he has been willing to renege on trade agreements.

"In the world of Trump, rules are meant to be bent or broken. So an agreement on trade doesn't necessarily have the durability one would have expected in the past," Schott said.

Beijing has said there is a "consensus on principles" regarding a deal with the United States. Specifics have yet to emerge, but Donald Trump has been talking up the prospect of progress between the two nations. (02.11.2019)

Although Washington postponed a new round of tariffs on Chinese exports, Beijing has targeted US cars, oil and food. President Donald Trump went on a Twitter tirade after the Chinese announcement. (23.08.2019)