The months-long unrest in Hong Kong has been escalating over the past few weeks. Mainland China's state-run media sharply criticize the protesters' actions and also blame Western media for their "biased" reporting. 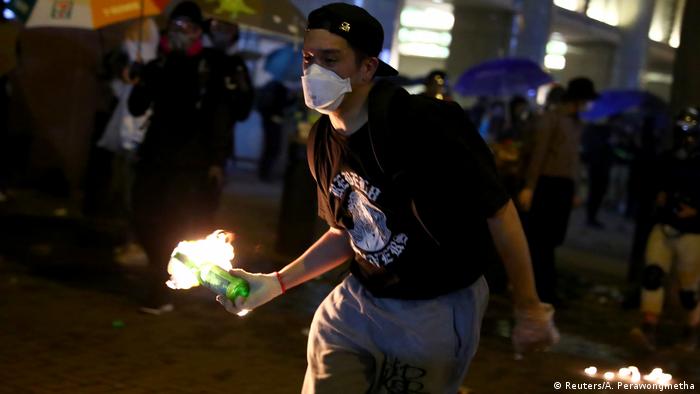 For mainland China's state-controlled media, the ongoing violent confrontations between police and anti-government demonstrators in Hong Kong pose a challenge to the country's integrity.

"We must not allow anyone to challenge the principle of 'one country, two systems,'" the official newspaper of the Communist Party of China (CPC), People's Daily, wrote on Monday.

The goal of the demonstrators, the paper said, was to "plunge Hong Kong into chaos, paralyze the city government, then seize power in the special administrative region to establish an independent or semi-independent political system."

The paper noted that this would upend the one country, two systems principle, adding that the future of Hong Kong "is at stake" and that there is "no room for compromise."

A day earlier, an editorial by the People's Daily said: "The increasing destruction in Hong Kong by violent criminals is causing citizens to live in constant fear. Their safety can no longer be guaranteed, fundamental citizens' rights such as freedom of expression are being massively curtailed and the rule of law is under serious threat."

The paper cited a statement issued by Chinese President Xi Jinping during his visit to Brazil last week. "Putting an end to violence and chaos, and restoring order, are the most urgent tasks in Hong Kong ... The vast majority of Hong Kong's population are opposed to violence; they are for the rule of law and for security and peace," Xi said.

The Chinese language edition of the Global Times newspaper, famed for its firebrand nationalistic rhetoric, described the protest movement as "new terrorism."

In its edition on November 15, the paper wrote: "The demonstrators, both on account of their black outfits and their armed occupation of parts of the city, increasingly resemble the fanatical fighters of the Islamic State."

It added: "The next step would be to take hostages and blackmail the government. If the demands are not met, we can expect the execution of the hostages. The reputation of Hong Kong's universities and the whole city has already become their hostage. The radical demonstrators are spreading a new form of terrorism. They are making themselves a kind of human bomb. They shout 'burn together' and commit suicide bombings against this modern city."

Hong Kong demonstrators "present organized, coordinated and strategic resistance to the rule of law, which knows no borders," the paper continued. "This distinguishes them significantly from protesters in most other Western societies."

In an earlier article published on November 13, Global Times wrote: "Whoever weakens police competence, helps the perpetrator of violence."

The paper continued: "Do the majority of Hong Kong residents want a general strike in the city? The answer is obviously no. If a majority were in favor and if people hadn't gone to work in the first place and hadn't opened the shops at all, then the barricades wouldn't be necessary. Paralyzing the city is not in the interest of the majority of Hong Kong residents, but the visible and invisible costs are being borne by all the residents together."

The paper stressed that the measures taken by police are "legally and morally fully legitimate."

'Failure of the Western press'

Another article published by the same newspaper on November 12 dealt with media coverage of Hong Kong in the West. "The Western media's coverage of Hong Kong is recent days is not objective at all. It has given the public a false impression of the situation in Hong Kong and encouraged the perpetrators of violence. This is nothing other than pouring oil in the fire."

The article noted that Western media lay greater emphasis on the Hong Kong police's use of force against the protesters. It pointed to the example of a policeman shooting a young demonstrator in the torso, which grabbed global headlines. The paper said that Western media outlets failed to mention in their coverage that the demonstrator had previously tried to steal the gun from the police officer.

Global Times also complained that not enough attention was paid to the facts that innocent people were being attacked and that there were threats to fire an explosive device on the campus of the Chinese University of Hong Kong if the police did not release arrested student protesters.

"The Western media deliberately ignore these terrible events, or trivialize them," the paper stated.

"There is no open criticism of these acts of violence and no condemnation," it said, adding: "The coverage of events in Hong Kong has shown us how biased the Western media are when doing their work, regardless of their own professional ethics. One could call it a scandal in the media history of the West."

Hong Kong police threatened to use live ammunition if protesters continued to wield "deadly weapons" against them, after a policeman suffered an arrow wound. Protesters refused to leave the city's Polytechnic University. (17.11.2019)

Opinion: No political solution in sight in Hong Kong

Hong Kong police are threatening to use live ammunition, but applying more force will not resolve the situation. The territory is facing a political crisis — and a political solution is needed, writes Philipp Bilsky. (18.11.2019)