A government ban on wearing face masks was "incompatible with the Basic Law" of Hong Kong, the territory's highest court has ruled. The ban was aimed at pro-democracy protesters trying to hide their identity. 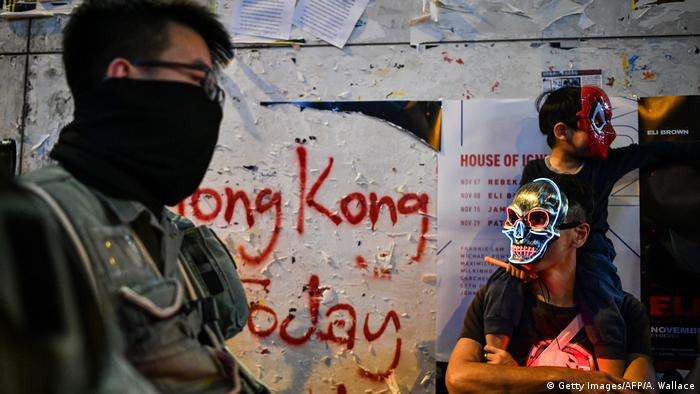 The High Court in Hong Kong ruled on Monday that a controversial ongoing ban on face masks was unconstitutional.

"The restrictions it imposes on fundamental rights go further than is reasonably necessary [...] and therefore fail to meet the proportionality test," the court said in a press statement.

The law had been revived from emergency legislation dating back to the British colonial era. Many protesters have defied the law over the last few weeks.

The face mask ban first came into effect in October, when Chief Executive Carrie Lam invoked the law for the first time in more than 50 years. The ban was largely symbolic, with many demonstrators refusing to comply.

Will the removal of the mask ban calm tensions?

There is no suggestion that the ban drop will do anything to quell protests.

The news come after a weekend of clashes between protesters and police. Violence has escalated in recent weeks as organizers urged protesters to "blossom everywhere" to cause maximum disruption.

The protests were triggered in June by a proposed law allowing for the extradition of criminal suspects to mainland China.

The legislation was seen by many in Hong Kong as an attempt by Beijing to erode the autonomy guaranteed when Britain handed the territory over to China in 1997.

Although the bill was ultimately dropped, the protests have expanded into a wider resistance movement demanding full democracy.

Pro-democracy activist Jimmy Lai has been granted bail and put under house arrest. The media mogul had been kept behind bars since December 3 over suspicions of fraud and colluding with foreign forces.

The princess hasn't been seen in public since she tried to flee Dubai in 2018. She is believed to be held against her will by her father, but has reportedly showed up in Spain on vacation.