Hong Kong universities: a new battleground between protesters and police | Asia| An in-depth look at news from across the continent | DW | 18.11.2019

Hong Kong universities: a new battleground between protesters and police

As a political solution remains out of sight, violence between demonstrators and police in Hong Kong has escalated as many young people see themselves as carrying out a "final battle" for their civil liberties. 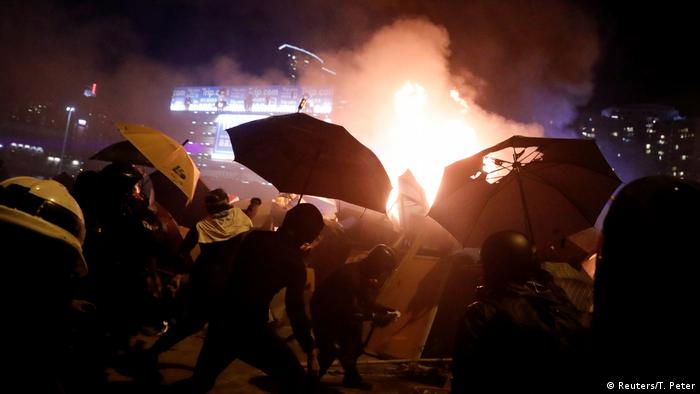 The streets around the campus of the Hong Kong Polytechnic University, located in a busy part of the central Kowloon district, were blocked Monday morning as hundreds of pro-democracy activists clashed with Hong Kong police.

Some of the demonstrators reportedly threw molotov cocktails and set parts of the campus on fire, while the police responded with tear gas. One officer reportedly fired three shots from his pistol because he feared for his life, according to official accounts of the incident. There were no reports of any injuries resulting from the gunfire.

The occupation of several Hong Kong universities by demonstrators and the combative response by police over the weekend are signs that Hong Kong's pro-democracy protest movement could be taking a more extreme turn.

One of the student demonstrators told a DW reporter on Monday that she had "already written her will," adding she would continue her "peaceful resistance" despite the massive police operation.

"Although I was unarmed, I was hit by spray from a water cannon. It was very painful. But I will not let the police destroy my determination," she said, preferring to remain anonymous.

The 'final battle' for Hong Kong?

Another student demonstrator, who was also sprayed by high velocity, blue-dyed water from a cannon, said that the demonstrators would "have to retreat," as their cohorts coming from "the other fronts" would not be able to support them.

He told DW he was "sorry" that his "front" was unable to hold back the police operation.

Pro-democracy parties in Hong Kong are concerned about the recent escalation in open conflict between students and police. Last week, democratic lawmaker Claudia Mo Man-ching said young people in Hong Kong were "obviously ready to give up their lives" for their political demands.

The lawmaker added that the demonstrators consider this latest phase of the demonstrations, which have been ongoing since June, to be a "final battle."

The campus of the Hong Kong Polytechnic University is located across from Hung Hom station, a vital transit point where the East Rail and West Rail metro lines meet and 18 trains originate that connect Hong Kong with mainland China. On Monday, there are far fewer passengers at the station than normal.

Nearly two years ago, Chinese officials set up border controls at Hung Hom station for passengers heading to the Chinese mainland, which many Hong Kongers see as a violation of the territory's agreement with Beijing.

Additionally, the "voluntary assistance" of soldiers from China's People's Liberation Army (PLA) stationed in Hong Kong has been interpreted as a warning sign from Beijing.

On Saturday, PLA soldiers in civilian clothes reportedly cleared street barricades around their barracks. There is concern these soldiers could soon be deployed to counter both rioters and peaceful demonstrators. Officially, however, Hong Kong's government must first request this kind of intervention from the central government in Beijing.

For the students who have entrenched themselves on the campus of the Polytechnic University, the memory of the 1989 massacre on Tiananmen Square in Beijing is a constant preoccupation.

Li is in favor of finding a political solution to the problem.

He is contesting in the upcoming district council elections as an independent candidate for the democratic camp.

The district councils are widely regarded as advisory bodies with little formal power. The elections are due to take place next Sunday, but could be postponed due to the ongoing unrest.

"The Communist Party, Hong Kong government and police all agree that they must take a hard line against the violent rioters," Kong Tsung-Gan, a Hong Kong author critical of the regime, told DW.

"What the police did followed this logic. It demonstrates that the government wants to pursue this course of action in an extraordinarily rigid way." 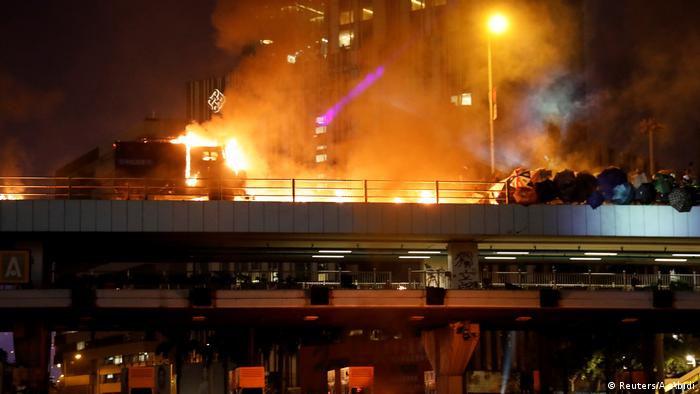 At a press conference on Monday afternoon, Cheuk Hau-yip, head of the police task force in Kowloon, appealed to the occupiers of the campus to evacuate it.

Fighting tears in his eyes, he told reporters: "Please tell the demonstrators to turn themselves in to the police and the rule of law. That is exactly what they are demanding."

Although he adheres to the principle of minimal violence, Hau-yip said, he must keep all options open.

"The police can and will use deadly weapons, if necessary. Until now, a police officer had only been hit by an arrow in his leg, but such an arrow could also turn into a fatal blow," the police official underlined.