In an unexpected move, China's People's Liberation Army have left their Hong Kong barracks to help the city tidy up after protests. Following Beijing's warnings of restoring order, the intervention left opinions divided. 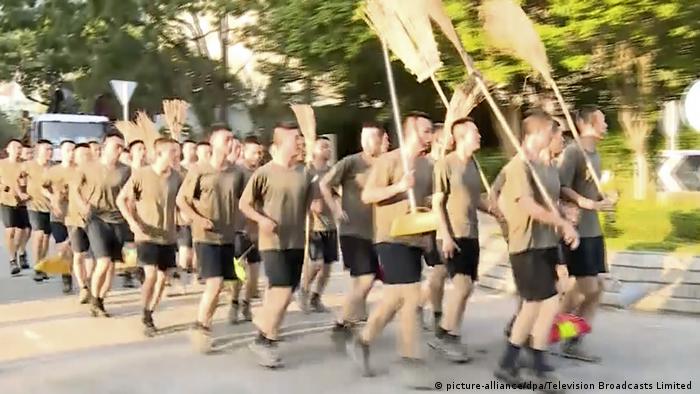 Chinese troops took to cleaning Hong Kong's streets on Saturday to clear the city of debris and barricades left by protesters, leaving critics skeptical of their motives.

During the clean-up, which took place near the Hong Kong Baptist University, Chinese People's Liberation Army (PLA) soldiers threw bricks to the roadside and filled buckets and trolleys with debris, while others swept after them with brooms and shovels. Some soldiers occasionally left to take orders before returning to the clean-up.

The operation was caught in a livestream by local broadcaster RTHK.

The rare move left opinions divided among civilians in the territory, with some welcoming the army's action and others dismissing it as a PR stunt.

However, a Hong Kong city spokesman said the intervention was a "voluntary community activity," according to Reuters.

Details of the army's operation remain unclear, including information about the exact number of soldiers who were involved in the intervention.

Under Article 14 of the city's Basic Law, Hong Kong's local government can seek help from PLA garrisons in the city in the event of a breakdown of public order. More than 10,000 PLA soldiers have been stationed in Hong Kong since its handover to China by the British in 1997.

One Hong Kong Facebook user wrote, "Today they come to pick up rocks, tomorrow they will come to take our lives."

Meanwhile, some people applauded the army, shouting the slogan of encouragement, "Hong Kong add oil." One man, who gave his name as Chu, told the French news agency AFP, "Very good, they're helping the weak and poor." No protesters were seen at the clean-up scene.

The Chinese army has appeared on Hong Kong streets only once since the 1997 handover, to clean up after a typhoon in 2018.

Read more: Hong Kong: For the protesters, this is a kind of endgame

The clean-up followed some of the worst violence ever seen in Hong Kong this year, after police clashed with protesters on Tuesday at the Chinese University of Hong Kong.

Dixon Sing, a political analyst, said the clean-up was "symbolic" because of the barracks closeness to the roadblocks.

"I'm not quite sure if the PLA will extend their action similar to what we have seen to other areas ... We will have to wait and see," he said.