China′s first Fridays for Future sees teen planting trees | Asia | An in-depth look at news from across the continent | DW | 30.10.2019

Howey Ou did not see any Chinese students in the Fridays for Future movement, so she became China's first climate striker. She realized this was not an easy thing to do after the police took her from her first protest. 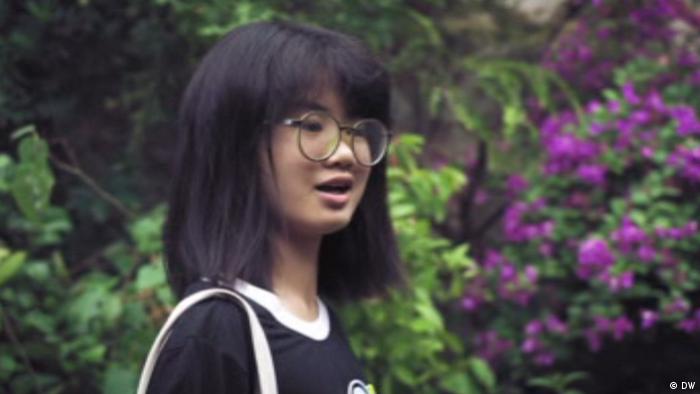 Howey Ou strode across the flower market of her home city of Guilin on a hazy October afternoon. But she had no consideration for the rhododendrons, anemones and bougainvilleas the shopkeepers had lined up along the market aisles. She was headed to a small stand at the very end of the market where she picked six scrawny osmanthus seedlings.

The osmanthus flower is praised in China for its scent, it is brewed into a fragrant tea or added as a flavor to rice wine. Poets have sung its praise. But these aren't the characteristics that interest Howey. A professor had explained to her that the osmanthus is effective in absorbing carbon dioxide. Howey is China's first climate striker and has not been to school for four months. But several times a week she buys seedlings and plants them in the surrounding area. "Protesting needs a lot of courage in China," she said, "But planting trees is something we can do."

China is the world's biggest emitter of greenhouse gases. Environmental scandals are rampant and its cities are notorious for their smog. Yet when millions of young people around the world took to the streets to demand action from their governments on climate change, nothing of the like happened in China.

Anxiety about the climate

Howey learned from a newsletter about the Fridays for Future movement and Greta Thunberg, the Swedish teenager who started the worldwide protest by sitting each Friday on the steps of the Swedish parliament. Like Thunberg, Howey is 16 years old; she became aware of environmental issues one year ago when she came across an issue of the American magazine National Geographic in the local library. An article about plastic waste in the sea left her deeply troubled.

"I would feel anxiety every time I thought about what was happening," she said. "At the worst times this would happen to me every 10 minutes, I could not focus on anything anymore."

Since then she has worked to learn as much as she could about environmental issues.

By March 2019, students in more than 100 countries had joined the protests.

"When I saw that not one student in China had participated, I became very disappointed," she said, adding that she decided to be the first Chinese youth to go on climate strike. "I felt I could make this movement happen in China."

Two months later, she posted a picture of herself standing in front of the city government offices with a cardboard sign: "We need you to join. It was a message her fellow students read. She stood there for seven days. Then the police took her away.

Environmental protests are not uncommon in China. In July, thousands rallied against a planned waste incinerator in the city of Wuhan in central China. After days of protests that eventually led to clashes with the police, the government dropped the plan. In 2016, residents in the eastern Chinese city of Longtou forced their government to halt plans to build a petrochemical plant — although recent news suggests the construction had been resumed. Similar protests happened in the southwestern city of Kunming and in Shanghai. But these incidents were local protests targeting a specific project feared to harm resident's health. Demanding changes to the country's climate policy is taboo in China.

Howey was taken into a police station and was lectured to about why her protest was illegal. They contacted her parents and told her to stop taking to the street. Fearing for consequences, she did not appear at the government gates again. "I am not that courageous," she said. But she said she also felt she could not give up on the issue. 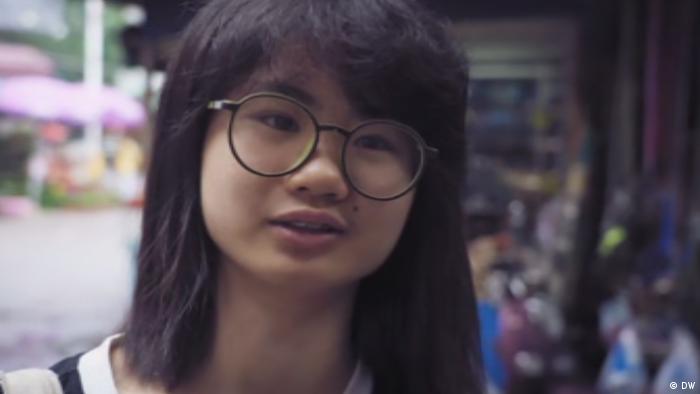 Howey said her parents fear she is throwing away her future

At home, her activism has led to tensions. Howey's parents have agreed to a vegan lifestyle, they avoid plastic bags and traveling by plane. But her decision to skip classes left them deeply worried. In a society that highly values academic success, they feel she is trading her future for activism. But Howey brushed away her parents' concerns: "This is the most existential crisis ever for mankind. All of us must do everything we can to protect the climate."

Read more: After China's import ban, where to with the world's waste?

Howey and a friend boarded a bus to take the six osmanthus seedlings to a village outside of the city. She met an old farmer, a distant relative, who agreed to let her plant the trees on his land. There is almost no uncultivated land around Guilin, a city known for the nearby scenic karst mountains. Howey relies on the cooperation of farmers for her project. Tang Xiaodi, the farmer, said he understands and supports Howey's activism.

"The seasons have changed," he said. "In the middle of the 8th lunar month [first half of September] it used to be already quite cold here. Now it's warm until the ninth and even 10th month."

They planted the six osmanthus trees next to a small canal in front of his house. "I feel planting trees is a way to spread the message in China," she said, referring to the tight controls and the nationalistic public climate on the internet in China. "Fridays for Future are being ridiculed and cursed a lot on the Chinese internet," she said. "But I do get some positive comments. People say: look, the Chinese students are planting trees, while the foreigners just speak empty words."

Beijing had pledged to scale back its coal industry, but a new report says the Chinese government has quietly restarted construction of coal-fired power plants. The report also found an increase in coal consumption. (28.03.2019)

Germany is only responsible for around 2% of the world's carbon emissions. And there's a quick and easy way to reduce that even further, as DW's Felix Steiner argues in this polemic. (20.09.2019)