China tries to contain new coronavirus outbreak | Asia | An in-depth look at news from across the continent | DW | 29.04.2020

Although the worst of COVID-19 in China appears to be over, a possible resurgence is brewing in remote northeastern Heilongjiang province. Containment measures have been introduced as residents fear for their safety. 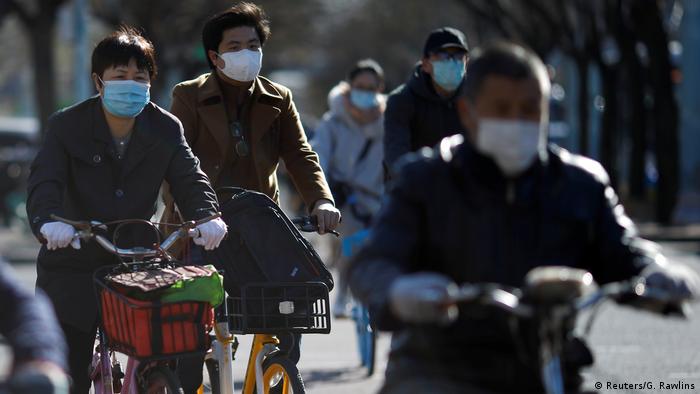 A series of new COVID-19 cases in China's far northeastern Heilongjiang province is raising concern that a second wave of the virus could emerge in the Asian country.

As China removes lockdowns and the overall number of new countrywide cases remains low, authorities in the province are taking action to prevent the new clusters from spreading out of control.

Since mid-April, several clusters of COVID-19 infection have been reported in Heilongjiang province's major cities. The province now has 386 active cases that have symptoms, and 116 recovered cases. Officials claim all of the currently active cases are "imported," with most of them being Chinese nationals returning from Russia.

In Mudanjiang City, cases started to emerge after a local hospital took in COVID-19 patients transferred from a small town near the border with Russia.

On April 18, an elderly couple in their 60s tested positive for the virus after transferring hospitals. On the same day, three more asymptomatic cases were reported in Mudanjiang; two patients were medical staff who had treated the couple, and a third patient was a family member. In the end, a total of 14 infections were confirmed in this cluster.

Mudanjiang residents told DW that after this cluster was revealed, local authorities stepped up controls in several neighborhoods. On April 26, Mudanjiang officials issued a statement, asking all residents "not to leave their houses unless it is necessary."

According to a screenshot of the notification shared with DW, the local government is asking each household to only allow one person "with a stronger immune system" to go shopping for essential items and return immediately.

"Starting on April 27, the government will deploy disciplinary teams on the streets, and any group of more than three people will be detained," the notification read. "Additionally, electric scooters will not be allowed to run on the street."

Apart from these rules, cars and individuals from other parts of the province cannot enter Mudanjiang. Only drugstores and licensed supermarkets are permitted to remain open. Garbage trucks and cars with government-issued licenses are the only vehicles permitted to be in traffic.

A resident named Huang said that although the city government shares updates regularly, most residents are skeptical about the government's transparency.

"While most residents rely on government data for information about the development of the pandemic, they don't really trust that the data is authentic," Huang told DW. "Some of us try to get information from other channels."

Huang added that he is uncertain about how the government determines its lockdown policy for Mudanjiang. "We never know whether they make such decisions based on political needs or scientific facts," he said.

The provincial capital, Harbin, has also reported several new COVID-19 infection clusters at hospitals. In one instance, an 87-year-old patient infected 78 others within a few days, forcing the Harbin Second Hospital to close.

However, despite the spike in cases, Harbin didn't roll out aggressive preventative measures like Mudanjiang.

"While only local residents are allowed to enter their neighborhoods, I don't think the guards are always strictly checking IDs," Li said. "Some local markets are still operating, although almost everyone wears a mask on the street."

Prejudice from other parts of China against people from the province of more than 38 million is emerging as the number of COVID-19 cases grow.

Huang from Mudanjiang told DW that more online hate speech is targeting people from Heilongjiang, and he worries that in the near future, people from the province will have to deal with systematic discrimination when they look for employment elsewhere in China.

Huang cited an example of a friend who used to work in Shandong province, and was recently told to postpone returning to work after the employer realized that he is from Heilongjiang.

"He was working from home during the peak of the coronavirus outbreak, and when he returned to Shandong province last week, his boss told him to go back to Heilongjiang and stay there until at least June," Huang told DW. "As you can see, discrimination against people from Heilongjiang already exists."

China has been heavily criticized in the latest world press freedom rankings. Its suppression of coronavirus information has real health consequences, not just in the country but throughout the world. (21.04.2020)

Did coronavirus really originate in a Chinese laboratory?

Did the novel coronavirus escape from a Chinese lab that researches bats? Though the early origins of the virus remain unclear, some Chinese scientists' work is helping develop a vaccine. DW examines the facts. (18.04.2020)

Despite the racist hostilities against Africans, China's influence in Africa is expanding as Beijing races to help the continent from the impact of the COVID-19 pandemic. (25.04.2020)