Car sales have fallen in all key regions, especially in China, the world's biggest auto market. With concerns about the economy and stricter emissions rules looming, there is no end in sight for carmakers' troubles. 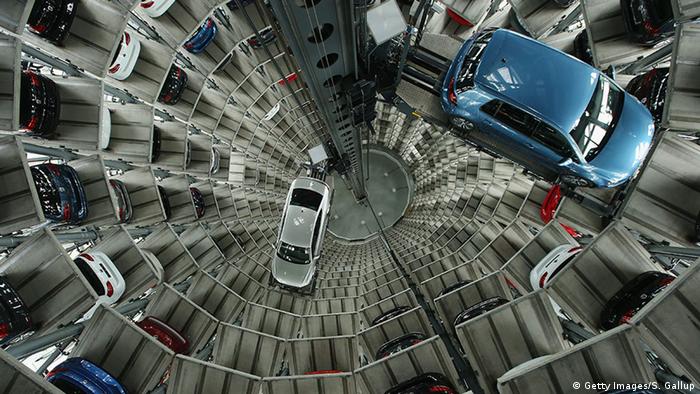 Passenger car sales took a major beating in all key markets across the world in the first half of this year, the German Association of the Automotive Industry (VDA) said on Wednesday.

The biggest fall was seen in the world's biggest car market by sales, China, where new car sales were down 14% to nearly 9.9 million, putting it on track for a second year of declining sales. In June, new car sales in the Asian giant fell a little over 7% to 1.7 million. 2018 saw the first annual drop in Chinese car sales in almost three decades.

The Chinese auto sector has been under a lot of pressure over the past 18 months, hurt by an economic slowdown that has dented consumer confidence, the ongoing trade dispute between Beijing and Washington, and the government's crackdown on peer-to-peer lending. Looming stricter emissions rules are also causing Chinese buyers to wait to buy new cars.

"The decline in the Chinese market has been the biggest shock for the whole industry," Nigel Griffiths from IHS Markit told DW. "It's been fast, strong and significant across all sectors and across the entire market."

The slowdown in the Chinese market, which accounts for a third of all vehicles sold globally, has added to the woes of global automakers, including Germany's Volkswagen, the world's biggest carmaker, and premium brands Daimler and BMW. Volkswagen, which counts China as its biggest market in terms of cars sold, has blamed weakness in the Asian country for a drop in its sales.

Some analysts, however, say that the decline in the Chinese car market may have bottomed out.

"Though we are not yet 'out of the woods,' the Chinese auto market would appear to be improving at the margin with the rate of the declines in recent months slowing and even some positive volume developments during the last few weeks," Goldman Sachs analysts said in a note to clients.

"An improving end market bodes well for German premium names sales, and we estimate that China contributes 30-40% of pre-tax profit at both BMW and Daimler," they said.

Car sales in the European Union fell a little over 3% to 8.2 million in the first half of 2019, according to VDA. In June, the drop was much steeper at 8%. New car registrations fell in all the major markets, barring Germany, where they were up 1%.

Sales in the 28-nation bloc have been under pressure for more than a year, mainly because of the diesel emissions scandal, stricter emissions norms and uncertainty surrounding Brexit.

Daimler last week cut its profit forecast for the fourth time in a year as it was forced to set aside more funds to deal with its regulatory troubles related to diesel emissions. The company also blamed market slowdown for the cut.

BMW reported its first loss in a decade in the first quarter of this year, after keeping aside €1.4 billion ($1.6 billion) for potential EU fines over its alleged collusion with VW and Daimler to delay the implementation of greener technologies.

Both Daimler and BMW have also suffered from Chinese tariffs on their cars made in the US.

Meanwhile, French carmaker Renault's Japanese partner, Nissan, saw a steep 24% drop in car sales in the EU between January and June. A company spokesman told Bloomberg that the decline was a result of a move away from less profitable sales channels such as rentals and a shift from existing models to cleaner engines.

Although Renault Group's EU sales were flat in the first half, Renault brand sales fell over 6%. But the company expects a boost in the second half from newer models.

"This time last year, the European market was starting to be inflated by the manufactures trying to sell vehicles ahead of the WLTP [Worldwide Harmonized Light Vehicle Test Procedure] testing deadline which caused a major distortion in the market during last summer," Griffiths said. "And so the market is a little bit weaker right now compared to then."

When the new testing procedure came into effect in September last year, it led to a major correction in the market. The supply of new vehicles was hit as manufacturers waited at overcrowded testing stations to get WLTP approvals.

"We expect a technical recovery in the market in the second half just because the comparative base will be extremely easy," Griffiths said. "In other words, the second half will be stronger than the first, but it will still be down almost 1%."

Registration of light vehicles, including cars and trucks, in the US fell by nearly 2% to 8.4 million in the first half of 2019.

India saw car sales fall by 10% to 1.6 million passenger cars in the first six months. The fall was much steeper in June at 18%. Morningstar analyst Richard Hilgert told DW that the decline was caused by "tighter credit policy, higher fuel prices, and increased insurance premiums."

Sales in Japan were flat in the January-June period.

Brazil, however, bucked the downward trend. Light vehicle sales in the South American country rose more than 10% to 1.3 million in the first half of 2019.

The automotive industry is coming under increasing pressure worldwide due to a growing focus on electric mobility, autonomous driving and digital services. Competition from China is also on the rise. (07.01.2019)