Chemnitz: Syrian asylum-seeker convicted of killing that sparked far-right riots | Germany | News and in-depth reporting from Berlin and beyond | DW | 22.08.2019

Alaa S. has been sentenced to nine years and six months for the killing of Daniel H. Chemnitz has done a lot to try and alter its image since the death.

The man accused of the killing that led to a week of far-right violence last year in Chemnitz was found guilty of manslaughter at a court in Dresden on Thursday, and sentenced to nine and a half years in prison.

Alaa S., a 23-year-old Syrian asylum-seeker, had maintained his innocence, while state prosecutors demanded a 10-year prison sentence for "joint manslaughter and serious physical injury." The prosecution case was largely based on the testimony of an employee at a nearby kebab shop.

In an interview with public broadcaster ZDF a few days before the verdict, Alaa S. swore that he did not touch either the victim or the knife that killed him. His lawyers pointed out there was no DNA evidence linking him to either, though in their final statement on Thursday, prosecutors said his guilt had been proved nonetheless.

The main suspect, 22-year-old Iraqi Farhad A. who had previously been accused of stabbings, has not been found and is believed to have fled the country. A third suspect, another young Iraqi, was released last September for lack of evidence.

For the people of Chemnitz, the verdict is unlikely to bring closure to what escalated into a series of ugly events last year, and attracted major media coverage to the city.

On the day after Daniel H.'s killing, a city street festival that had been running the whole weekend turned sour, and some people were filmed chasing migrants, while the police appeared unable to control the situation. When the festival was abruptly shut down, it gave way to a week of far-right protests, attended by thousands of neo-Nazis from across the country, often in violent confrontation with Antifa counterprotests, and desperate attempts by the local government to hold a dialogue with citizens.

These were followed by a major rock concert in Chemnitz, and huge demonstrations in Berlin and other German cities under the hashtag #WirSindMehr ("We are more"), meant to highlight Germany's open and inclusive culture. 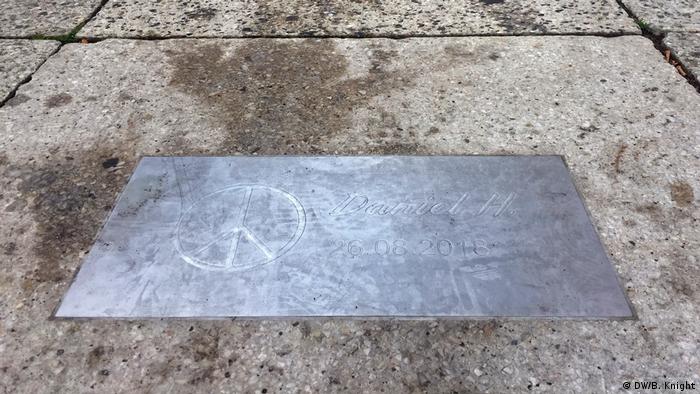 The plaque marks the spot where Daniel H. was killed

If you weren't looking for it, you might not even notice the plaque for Daniel H. on the broad sidewalk of Chemnitz's Brückenstrasse that marks the spot where he died. The small silver metal plate, engraved with a peace symbol, has replaced a pool of candles and flowers that were laid here for days in the aftermath of the death.

But a lot has happened in Chemnitz since last summer. Concerts and exhibitions emphasizing tolerance, diversity and openness have come thick and fast. In July this year, the center of the city was transformed into a festival ground for the Kosmos concert, this time under the hashtag #WirBleibenMehr ("We will remain more").

In the same vein, the city festival that was abruptly cut short last year will be replaced this weekend with a three-day street festival, entitled Herzschlag - Chemnitz lebt! ("Heartbeat – Chemnitz is alive!"), organized not by the city but by a local initiative.

The city authorities, with support from the federal government, have also invested more money in cultural and educational projects. One of these is Chemnitz Open Space, and can be found right behind the giant sculpture of Karl Marx's head, both Chemnitz's most famous landmark and the focal point for any demonstration — including the far-right protest that sparked so much trouble last year.

Opened in May, Chemnitz Open Space allows local artists and activists to put on exhibitions and workshops meant to foster the city's democratic culture. (One exhibition inside details Chemnitz's connections with the National Socialist Underground terrorist organization). One of the project managers is Rebecca Dathe, who was spending Wednesday afternoon planting new plants in the grassy area next to Karl Marx — the same lawn where hundreds of far-right extremists and riot police officers had stood a year ago.

Community awareness has heightened; Dathe describes how, until last summer, many people in Chemnitz would simply accept that their neighbors or friends had far-right opinions. "The events last year caused many people to get more engaged more politically," she says. "You noticed that the incidents showed that people are dealing with far-right extremism more consciously. They don't just look away."

That much was backed up by Franz Knoppe, project director for the Chemnitz cultural and educational organization ASA-FF, the "Network for Global Learning." "There are a lot or people working on this, seeking out space for dialogue, spaces to tell stories," he told DW. "And a lot of the events are really full. A lot is happening." 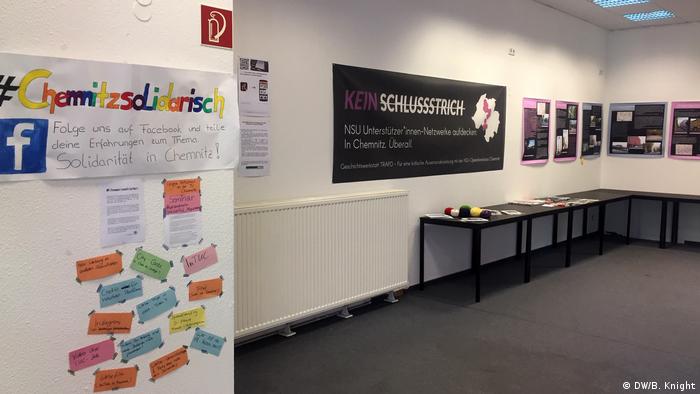 But beneath these efforts at political engagement in Chemnitz, the politics in the city can't be hidden. The results of the city council election in May this year returned the far-right Alternative for Germany (AfD) 18% of the vote, a close second to the conservative Christian Democratic Union (CDU). That doesn't sound that much, except that the far-right group Pro Chemnitz, which includes some neo-Nazis, and which organized last year's far-right demo in the wake of Daniel H.'s death, took another 8% and now has five of the 60 seats in the city council.

Karsten Hilse, an AfD Bundestag member for Saxony, says last year's demos have been misrepresented. "Of course there were some far-right extremists there," he said. "But a young man was murdered, and then citizens got together who weren't far-right extremists, but just normal people like you and me, who said, 'right, this is enough now'."

"What annoyed a lot of Chemnitzers is that hardly anyone talked about the murder afterwards, but only about the people who demonstrated," he argued. "But if you're a normal citizen, you go to work, you pay your taxes, and then you say ok, now I'm going on the street to say: 'I just don't agree with this migration policy anymore.' And then when the media suddenly describes you as a far-right extremist, then of course you get really angry."

Despite the city's best cultural efforts at fostering tolerance, many Chemnitzers resist what they see as attempts to impose an ideology. "If it becomes too demonstrative, then it becomes divisive," said Knoppe. "The 'Wir Sind Mehr' demos are an act of self-assurance: 'Maybe we are more,' but it doesn't open the people who maybe didn't want to march with the Nazis, but also didn't like the fact that Daniel H. was killed."

"A lot of East Germans just know how to poke people to get a reaction. They say, 'oh, we're not allowed to say Nazi, then I'll say Nazi'." he said. "And then you're suddenly in this reflexive zone." By way of illustration, Knoppe points to a video released in mid-August by the local rapper Bengalo Dobermann, which honors Thomas Haller, a hooligan who died earlier this year having built a banned far-right organization associated with Chemnitz's local football club. The rap mocks tolerance as a "piper" everyone has to dance along to, and dismisses press and politicians as "being in the same boat" while dismissing the "loyalty" of people like Haller.

But even as they react with antipathy to political moralization, which, according to Knoppe, "reminds people of communist East Germany," there is evidence that the people of Chemnitz do get on at basic day-to-day level. Drinking a coffee on a quiet August afternoon, Knoppe tells an anecdote about how his own children play in football teams with children of immigrants and children of AfD voters. He knows that some of them attended the far-right demonstrations last year.