Why was a Neo-Nazi hooligan mourned at a football game in Germany? | Sports | German football and major international sports news | DW | 14.03.2019

A minute’s silence for a deceased fan at a fourth-division football match is causing controversy in the German state of Saxony and beyond. The fan in question was a well-known hooligan and far-right activist.

"Rest in peace, Tommy!” read the black banner behind the goal ahead of kick-off between eastern German side Chemnitzer FC and Berlin outfit Altglienicke on Saturday, in memory of a deceased fan. The message was accompanied by a large cross, several flares, a minute's silence, emotional music and an address by the stadium announcer.

During the game, Chemnitz striker Daniel Frahn celebrated scoring his side's third goal in the 4-4 draw by holding up a t-shirt with the message: 'Support your local hooligans!' "With this gesture, I wanted to fulfil the wish of our fans to commemorate the deceased,” said the 31-year-old former RB Leipzig forward. More than 4,000 people were in attendance. Frahn later apologized for his actions.

But the fan in question, Thomas Haller, was not just any fan; he was a well-known hooligan, Neo-Nazi and co-founder of the group "Hooligans, Nazis, Racists” (HooNaRa) in the 1990s.

Read more: From the stand to the streets: What does Chemnitz violence have to do with football?

Furthermore, Haller's security company was once responsible for security at Chemnitzer FC's Stadion an der Gellertstraße. In December 2006, Haller gave an interview to football magazine RUND, in which he spoke in detail about HooNaRa's activity.

'We'll be anywhere in half an hour'

"We are football people that show Germany and Europe that Saxony exists,” he explained. Asked if the group is still active, Haller said: "In the meantime, (the group's members) got ten years older. Actually, HooNaRa doesn't exist anymore. But on the other hand, we'll be anywhere in half an hour.” 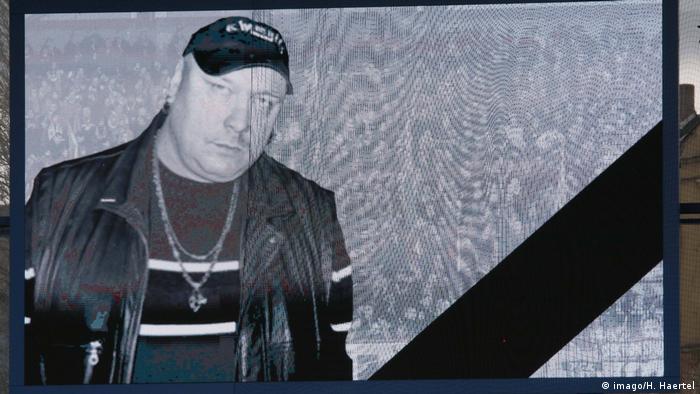 The death of Thomas Haller was mourned on Saturday

Haller's firm lost the security contract as a result of the interview, which was viewed as "harmful to the club”. According to German public broadcaster MDR, however, Haller's company continues to supply the club with security services to this day.

Haller's death, which followed a long battle with cancer, was also mourned by fans at German third-division side Energie Cottbus, with whom Chemnitz's hardcore supporters share a friendship, as well as in the Swiss Super League at Grasshoppers Zurich. Energie Cottbus have already confirmed to local media that their fans' banner that mourned Haller's death was approved by the club, as was the case in Chemnitz.

Robert Claus, a researcher and author who specializes in far-right extremism and football, told DW that it's no coincidence that several clubs took part in the mourning of Haller. "It's a pan-European network of far-right groups,” he said.

Chemnitzer FC have announced that the club has filed an official police complaint regarding the case. However, the complaint was filed against an unknown entity.

Initially a club statement claimed the minute's silence was held "in accordance and in consideration with the security forces” before later claiming the incidents "deviated from the club's security concept".

Replying to a DW inquiry, police in Chemnitz said that Chemnitzer FC personnel had notified them about the pre-match ceremony in memory of Haller on Saturday morning, a few hours before the game. "We voiced our reservations, having known who Haller was, but we could not legally prevent it,” a police spokeswoman said. 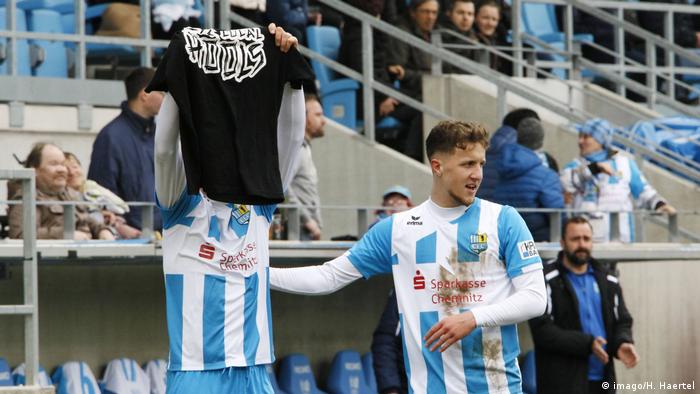 Daniel Frahn holds up a shirt with a pro-hooligan message

The Northeastern Football Association (NOFV), which is responsible for the Regionalliga Nordost, said it will investigate both Chemnitzer FC and Daniel Frahn.

Chemnitzer FC CEO Thomas Uhlig has resigned in the aftermath of the case in an attempt to "prevent further damages from the club” while the club's primary sponsor, the local Sparkasse bank, has announced it will withdraw its financial support.

Fan liaison officer Peggy Schellenberger, who also serves as a Chemnitz city council member representing the Social Democratic Party (SPD), will also be relieved of her duties. After learning of his death, Schellenberger used her Facebook account to talk about Haller.

"We lived in different worlds… But there were other, humane sides… We were always fair and not political to each other,” Schellenberger wrote, in a post which was then deleted. The club's stadium announcer and a member of the communications team have also been sacked.

While progress has been made over the past decades, far-right tendencies still exist in German football. Football hooligans in Germany are known to be better trained and better organized than they previously were. 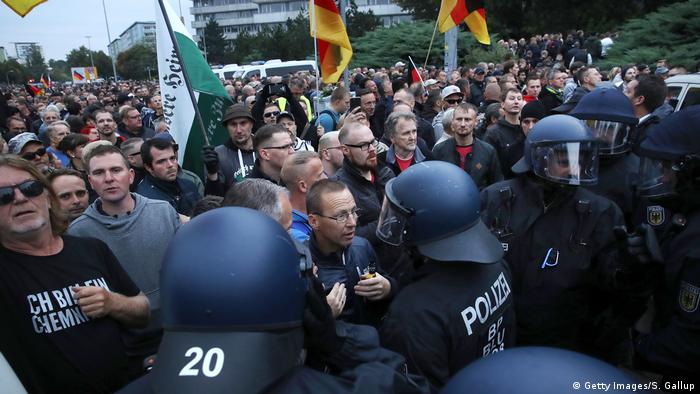 Chemnitz was the scene of mass demonstrations last year

According to Claus, Chemnitzer FC's hooligans "have been among the most well-organized, well-trained groups in Germany over the last 30 years. They can put the club under lots of pressure."

Two days after Chemnitzer FC’s game against Altglienicke took place, the club’s ultras responded to the media coverage around the memorial ceremony for Haller.

"Tommy's death still shakes us, but we’re almost as shocked by the events that followed," said fan group Ultras Chemnitz 99.

In a Facebook post on their page, Ultras Chemnitz labelled Haler as a "long-time member" of the Chemnitzer FC fan scene, and said the ceremony was held regardless of Haller’s political views.

"It was nothing more of a goodbye to a friend," the announcement said.

Chemnitzer FC held a press conference on Tuesday, explaining their side of the incident. The club’s administrator, Klaus Siemon, said the club was "forced" to allow the use of the stadium facilities for the sake of the ceremony for Haller by an unknown group.

However, WhatsApp logs published by local Chemnitz news portal TAG24 indicate that top figures at the club were well aware of the repercussions. According to the report, supporter liaison officer Schellenberger wrote: "[Haller] was a reliable service provider, fan and a friend. In Germany, however, he’s known as the founder of HooNaRa.”

Schellenberger added that the club "must be prepared" for the media attention it would get due to the ceremony. "But Tommy has more than earned it!"

In addition to Schellenberger, the club’s security officer was also in favor of holding the ceremony for Haller. "We’ll find a solution for how it’ll be seen on the outside ... the It’s been 20 years since HooNaRa," he said.

In the summer of 2018, the city of Chemnitz made headlines in Germany and around the world. Far-right groups mobilized in the city after a local man was murdered, allegedly by migrants. According to reports in Germany, the far-right protesters attacked "foreign-looking” people in the streets and also attacked a Jewish restaurant.

One of the main groups to mobilize far-right activists in the city back then was local hooligan group Kaotic Chemnitz. According to local reports in Chemnitz, Haller took an active part in the far-right marches.

Claus says the far-right hooligan scene in Germany is "on the rise” as a result of the riots.

The story was updated on March 14 to reflect the latest developments.

The CEO of lower league German club Chemnitzer FC stepped down after the club allowed supporters to stage a tribute to a fan with neo-Nazi links. Chemnitz was the scene of widespread right-wing riots last year. (10.03.2019)

Saturday's far-right rock concert in the eastern state of Saxony featured two bands and had drawn an audience of several hundred people. Under German law, Nazi-era slogans and symbols are illegal. (02.12.2018)