Chemnitz killing: Trial begins amid questions of impartiality | Germany | News and in-depth reporting from Berlin and beyond | DW | 18.03.2019

Daniel H.'s stabbing death led to weeks of unrest and the sacking of Germany's domestic intel chief. Now, the manslaughter trial has begun despite major evidence 'gaps' and concern about judges' conflicts of interest. 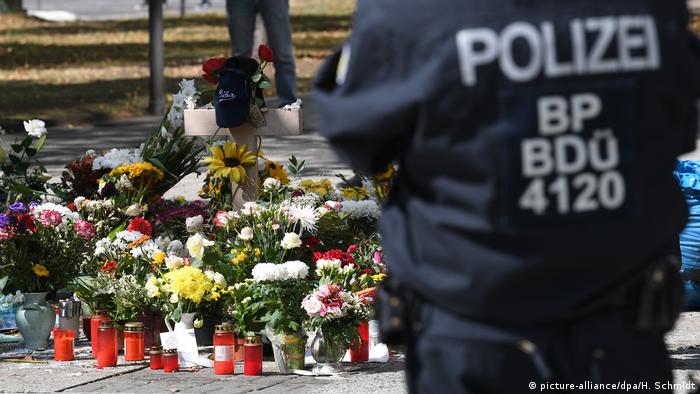 The trial of Alaa S. began in Dresden on Monday morning in the middle of a media scrum and fears of far-right protests, following the killing last year of Daniel H. in Chemnitz — an incident that led to a week of unrest and violence in the city. As the trial began, there were no demonstrations outside and the handful of spectators in the heavily-policed courtroom remained calm.

Alaa S., a 23-year-old Syrian asylum-seeker, is accused of homicide and grievous bodily harm for stabbing the 35-year-old German-Cuban Daniel H. to death in the Saxon city last August.

Daniel H.'s mother and sister appeared in court on Monday as co-plaintiffs along with Dmitri M., a truck driver of Russian origin who was stabbed and injured in the incident.

In court, Dmitri M. said he had been standing around in a group that included Daniel H. laughing and talking when a group of three asylum-seekers were suddenly standing with them. After a brief argument, whose cause Dmitri M. did not know, the asylum-seekers began a fight by slapping Daniel H. in the face, at which time Daniel H. pursued them.

Dmitri M. testified that during the ensuing fight he himself was stabbed in the back and he saw Daniel H. being kicked in the stomach to the floor by someone wearing light-colored clothing. But he was unable to describe the individual more closely, having had his back partly turned.

Dmitri M. then re-enacted the scene in the courtroom, with the prosecutor playing the part of Daniel H., in which the victim was lying on his back being stabbed in the chest while another man "punched or stabbed him." Though he was certain he saw Daniel H. being stabbed by the first man, he could not say for sure whether the second person also had a knife, or whether he was just punching the victim. "It was chaos," he said. "Everyone was screaming."

Alaa S., who denies he was even at the crime scene, did not speak except to confirm his identity. Another suspect, a young Iraqi named Farhad A., has disappeared and is believed to have fled to Iraq, where German authorities have officially requested help finding him.

The defense attorney, Frank Wilhelm Drücke, delivered a scathing assessment of the charges filed in court, calling for the trial be called off and his client freed due to the weakness of the case.

"Normally after reading (the charges) it is clear who, what, when and why something was done," he said in a statement. "What has been presented by the investigation is vague, conditional, and moves in the area of uncertainty." He added that the charges against his client were so unclear it was impossible to mount an effective defense.

Drücke described a litany of what he considered gaps in the prosecution's case, not least the lack of DNA evidence linking Alaa S. to the knife used and apparent inconsistencies in the description of the fight that he called "physiologically fantastical." The state prosecutor's account says at one point that Alaa S. and Farhad A. stabbed the victim simultaneously from two sides, but later mentions they both used the same weapon. Only one knife with the victim's blood has been found. The state prosecutor dismissed these accusations, and said the trial would show there was enough evidence to convict Alaa S.

Some friends of Alaa S. also appeared in the gallery on Monday. One of them, who named himself only Ahmed, told DW that he was "100 percent sure" that Alaa S. was innocent, because he was "a good person."

Lay judges to be assessed

Aware of the politically-charged nature of the trial, defense attorney Ricarda Lang filed an objection before proceedings began, asking that the court ensure that the lay judges (Germany's equivalent of a jury) were not members of far-right groups like PEGIDA, Pro-Chemnitz or the Alternative for Germany (AfD) party.

To an audible groan and a "what a joke" from one of the handful of spectators, the attorney also called on the presiding judge to ensure that the lay judges had not taken part in the demonstrations or memorial marches for Daniel H. The attorney insisted that the lay judges' political positions, and attitude to asylum-seekers in general, needed to be clarified to ensure a fair trial.

The judge determined the trial could continue, and admonished the defense for not raising its objection earlier.

Lang also said a comment by Chemnitz Mayor Barbara Ludwig that an acquittal would be "difficult," for the city risked prejudicing the trial. Klaus Bartl, a lawyer and Left party parliamentarian from the Saxony state parliament observing the trial, said that the people of Chemnitz would be perfectly capable of accepting what the court decides, before criticizing Ludwig for expressing her opinion.

"I'm not naive," he said. "Of course criminality moves people; that's normal. But if people think that judicial decisions can be influenced by what ordinary citizens think or the possibility of protests then they're moving away from the rule of law."

The Saxony judiciary took the unusual step of holding the trial in a Dresden courtroom to accommodate "extraordinarily large public interest" and to ensure better security. The courtroom includes a large plexiglass division separating the viewing gallery from the court itself.

Daniel H.'s death triggered a week of unrest and tension in Chemnitz last summer, with racist attacks on immigrants and restaurants, as well as far-right protests numbering thousands facing off against Antifa counterdemonstrations. The events indirectly led to the resignation of the head of Germany's domestic intelligence agency, Hans-Georg Maassen.

The trial proceedings are set to last 24 days, from now through October.

The German chancellor has defended her refugee policy on a trip to Chemnitz, three months after anti-immigrant riots shook the city. Debating with locals, she first had to explain why it took her so long to visit. (16.11.2018)

Whether you get nine months in jail or 31 for the same crime could have to do with where the judge sentencing you works. German legal scholars have been looking to the US for a solution to a practice that seems unfair. (25.10.2018)

Two months after far-right violence and ensuing demonstrations rocked Germany, the German president has made a subdued if cordial visit to the city now associated with far-right extremism. His message: We need to talk. (01.11.2018)