In a Germany first, Chancellor Angela Merkel fielded direct questions from lawmakers, with Russia and G7 high on the agenda. But the attempt to pep up the Bundestag's image left Merkel more lightly toasted than grilled. 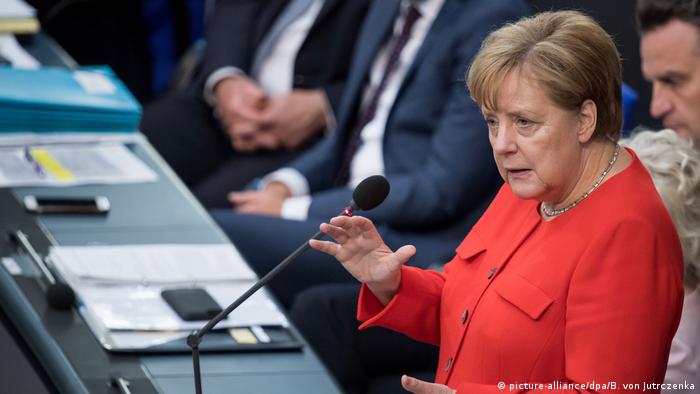 "Unspectacular." That was the general consensus among members of the German parliament outside the chamber on Wednesday following the country's first "Chancellor's Question Time."

Without being able to pose follow up questions, deputies in the Bundestag were restricted from digging deeper. Even Bundestag President Wolfgang Schäuble seemed unimpressed, regularly letting out a lethargic, "Thank you," and "Next question." Other MPs stared up into the Reichstag dome from where tourists peered into the chamber below.

The format was clear: One-minute questions; one-minute answers; no follow-ups and no pre-submitted questions. Three such sessions are planned each year. The aim? To "make the Bundestag the central place of social and political debate again,"  as set out in the agreement signed by the "grand coalition" of Merkel's conservatives and the Social Democrats (SPD).

The first question of the hour went to the largest opposition party, the far-right Alternative for Germany (AfD). After reprimanding Merkel for not attending last month's annual Economic Forum in St Petersburg, lawmaker Hansjörg Müller asked whether Merkel would consider a new "Ostpolitik" — using the Cold War term for West Germany's decision to start engaging more with the Soviet Union and East Germany.

Merkel responded saying she had had a "long, extensive, bilateral talk" with Russian President Vladimir Putin "on all pending issues" when she met him in Sochi in May.

"I'm in favor of talks with Russia," she said, "But keeping in mind the differences we have."

With the G7 summit in Canada coming up later this week. that wasn't the last time the chamber would hear from the AfD about Russia. Michael Espendiller later asked whether the G8 format, which previously included Russia, should be rekindled. Moscow was thrown out following the annexation of Crimea from Ukraine.

The G7 is defined by its members' respect of international law, Merkel responded, saying that Russia's annexation of Crimea was a "flagrant breach" of this. Russia's removal was "unavoidable," she added.

The first half of the Q&A was largely consumed by the upcoming meeting of the world's leading industrialized nations.

Merkel told MPs that she is "going in good will," and expects there to be "contentious discussions" at G7, particularly after the US withdrawal from the Paris climate accord and the Iran nuclear deal, as well as US President Donald Trump's latest move to impose tariffs on allies' steel and aluminum imports.

While pledging to preserve what was agreed upon at the 2017 G7 and G20 summits, Merkel also warned against "watering down” previous summit conclusions.

"There mustn't be compromise simply for the sake of compromise," the chancellor said. "I will of course try to speak to the US president about the current problems that we have overall."

'When are you going to resign?

Playing a much smaller role than expected was the ongoing scandal around Germany's migration office (BAMF). In April, it came to light that at least 1,200 positive asylum decisions were issued in the Bremen branch between 2013 and 2016 without meeting the legal requirements.

AfD deputy Gottfried Curio slammed the migration agency, saying workers had been turned into "puppets of a wave-through culture."

"When are you going to resign?" Curio demanded of Merkel.

Three years on since Merkel's famous "We can do this," the chancellor once again defended her open-door policy. Almost one million refugees arrived in Germany between 2015 and 2016.

The circumstances then amounted to an "exceptional situation" Merkel said, and "many steps" were now being taken to avoid the situation reoccurring.  "The basic political decisions were right," she said.

In other responses, Merkel said rules to facilitate skilled migrants coming to the country would not be abandonded and that she felt it was a "shame" there were fewer female members of parliament compared to the previous legislature.

While in answer to the Green Party, she said she was "not convinced" on implementing a plastic tax. The chancellor did, however, say she'd work to reduce the use of plastic.

After 30 questions in 60 minutes, Schäuble declared the questioning over. Known for her affinity for detail and quick thinking, Merkel unsurprisingly kept her cool for the entire hour. Her famous "diamond" hand gesture remaining intact for the large part.

"As sad as it is, it's over," the chancellor laughed as Schäuble called the session to a close. "I'll come again."

It was billed as Germany's answer to Prime Minister's Questions in the UK — one hour with Angela Merkel answering direct questions in the Bundestag. PMQs addict Mark Hallam wasn't captivated by the inaugural session. (06.06.2018)

Media report that three members of the Alternative for Germany flew to Moscow on a mysterious donor's dime during the 2017 campaign. Former co-leader Frauke Petry, her husband and another AfD figure took the trip. (22.05.2018)