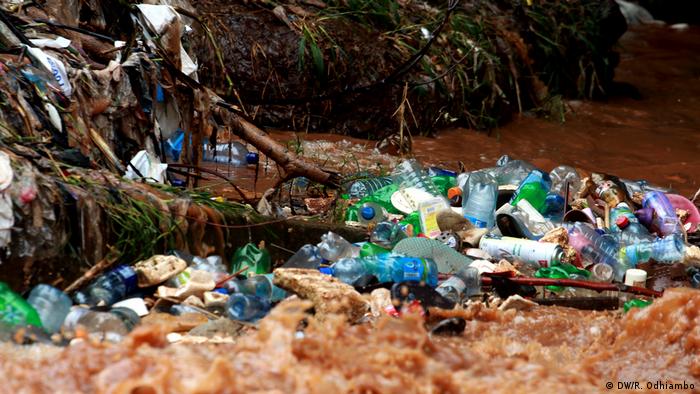 On Monday, the European Commission presented its proposal to ban disposable plastic items like single-use straws, plates and coffee cups. The plan, drawn up by European Commissioner for Budget and Human Resources Günther Oettinger, is an ambitious one. Oettinger told Funke Mediengruppe newspaper and magazine publisher: "We suggest that member states pay a certain fine into the EU budget for every kilogram of plastic that is not recycled." Currently, the plan is to charge €0.80 ($1.00) per kilogram of plastic waste. At the same time, the Commission wants to compel countries to recycle up to 90 percent of plastic bottles.

EU member states are expected to individually implement the ban on single-use items. Although Germany's Environmental Minister Svenja Schulze told German national broadcaster ARD she would prefer a single Europe-wide regulation. Provided the "onus is on recycling plastic"  – something that is already is one of Germany's main environmental policies.

Schulze is proud that Germans are exemplary recyclers. They are not just above the EU average, as the minister stresses, but by far the most efficient of all Europeans when it comes to recycling, according to a study by the German Economic Institute (IW).

But Rebecca Harms, a member of the European Parliament (MEP) for the Greens–European Free Alliance group, is less exuberant. In a statement, she pointed out that "it is more important to avoid plastic waste piling up in the first place." And this is where Germany still has much work to do. Germany is not just a leader in recycling, but also in producing waste.

On average, each German was responsible for producing 626 kilograms of rubbish in 2016, say IW researchers. Only Danes, Cypriots and the Maltese were worse. While the average amount of waste produced in other EU states declined between 2005 and 2016, it actually increased by one-tenth in Germany.

Some of these are municipal companies, others are privately owned. This dual public-private system is based on Germany's 1991 packaging law (the "Verpackungsordnung"), and the industry-funded Green Dot recycling scheme.

This means that German municipalities and companies jointly recycle German waste. Companies add the Green Dot logo to packaging they promise to collect and then recycle. However, critics say that companies only actually recycle a small fraction of materials they collect.

The IW study states that almost 70 percent of all German waste is recycled. But underlying this figure, as the researchers highlight, is a rather generous definition stating that any waste "collected or sorted" counts as properly recycled. In reality, much of this waste is not reused. That is why German Environmental Minister Schulze wants to talk to those who "can make use of this plastic" to build a "fully integrated circular economy."

Peter Kurth, of the Federal Association of the German Waste Management Industry (BDE), concurs: "Those who produce plastic goods are responsible for ensuing they can be recycled." But that's just the first step, he stresses, adding that "We do not think symbolically banning single-use plastic items will be very helpful."

But Thomas Fischer from Germany's environmental and consumer protection association Deutsche Umwelthilfe (DUH) thinks the ban could in fact help because "these are the kinds of items that get disposed in and end up in nature." Fischer, who is an expert on the circular economy, points out that these items, unlike plastic packaging, are not recycled through Germany's dual recycling system.

A new mentality is needed

Deliana Bungard of the German Association of Towns and Municipalities (DStGB) agrees. She says that "not properly disposed waste is a problem for municipalities, for which they are liable." Especially in summer, says Bungard, as people have barbecues and leave behind lots of single-use plastic packaging. She is certain that banning single-use plastic items would reduce this kind of waste.

But a ban is no panacea, as Environmental Minister Schulze knows full well. "When single-use plastic plates are now simply replaced by disposable aluminum plates we have made zero progress." As of 1 January 2019, a new packing law comes into effect in Germany that aims to ensure packaging can be better recycled. But that alone will not suffice. "Above all, we need to change people's mentality so that throwing away waste is no longer normal," stresses Schulze. Because once rubbish makes it into our oceans, it is almost impossible to retrieve.

Young refugees in Syria who have to go scavenging instead of attending school.

Domitila Barros, the online campaigner of sustainable living who grew up in a Brazilian favela, has won this year's Miss Germany contest.