Hedgehog rescued in Bavaria after getting stuck in plastic cup

Bavarian police said a hedgehog "could not resist the temptation" when it found the empty cup of ice cream on a road. Officers used the near-fatal incident to raise awareness about good waste disposal habits. 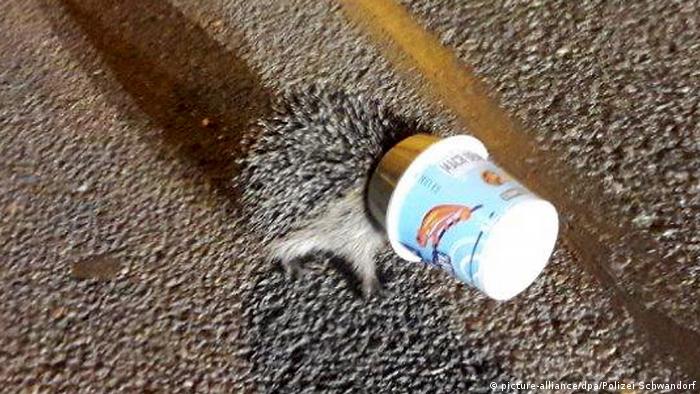 Firemen may get the glory when it comes to rescuing cats from trees, but police in the southern German state of Bavaria saved a hedgehog from a life-threatening situation on Friday.

Officers in the town of Schwandorf said they found the hedgehog wandering aimlessly on a local road with a plastic cup stuck on its head.

Police removed the cup after they realized the hungry critter was not able to free itself.

"The hedgehog was looking for something to eat and came across the cup," regional newspaper Mittelbayerische Zeitung quoted the police as saying. "It could not resist the temptation."

Officers believe someone had thrown the cup, thought to have contained ice cream, out of their car window while they were driving down the road.

On Twitter, police made an impassioned plea calling on the local population to be more conscientious about their waste disposal habits: "#Trash does not belong on the street; it belongs instead in the trashcan! #TurnYourBrainOn."

As for the hedgehog, police said it was able to continue on its way without any injuries.

How hedgehogs, birds and mice survive in frigid winters

How can tiny animals with fragile limbs survive the bitter cold when we are shivering despite wearing winter boots, gloves, and cozy down jackets? Well, these critters use some special tricks. (02.03.2018)

Unusual weather has led to an increase in sick and weak mature hedgehogs and babies. Fortunately, in Germany, there are organizations that care for hedgehogs and the animals' abandoned babies. (29.10.2017)