Angela Merkel's immediate task is to organize the contest over who will be her successor as leader of the CDU. Whoever it turns out to be could well pull the party away from the political center — wherever that is. 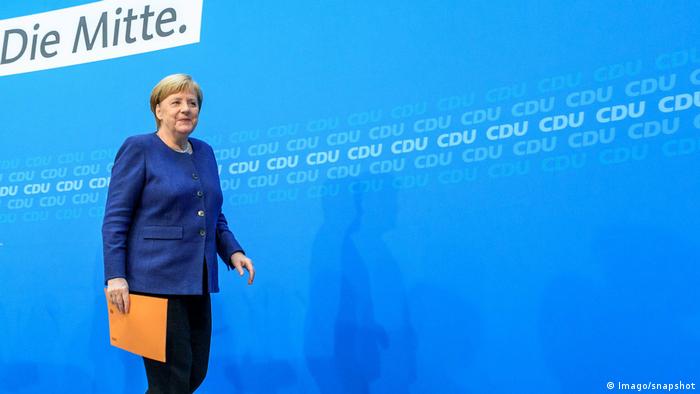 Angela Merkel appeared before the press in Berlin on Monday to deliver an interim report on how the leadership meeting at her Christian Democratic Union (CDU) headquarters has gone so far.

The meeting was ostensibly a preparation for the upcoming leadership contest, the first her party has faced in 18 years, but the chancellor hinted that at least part of the committee discussion had been devoted to the future direction of her party.

Pointing to the motto hanging behind her, which proclaimed her party's place in "the center," Merkel admitted that Germany's middle classes were currently somewhat split, which makes things difficult for a party like hers.

"Both sanguine and concerned citizens are part of this center," the chancellor said, citing a recent study by the Roman Herzog institute whose insights could have an influence on the party, which is due to elect its next leader at a party conference in December.

Some 12 members have already put their names forward to succeed her as leader of the CDU, though only three are thought to have a realistic chance: the party's General Secretary Annegret Kramp-Karrenbauer, Health Minister Jens Spahn, and former parliamentary group leader Friedrich Merz. Though as Merkel clarified, not all 12 applicants will necessarily become candidates, so the herd will likely thin out in the coming weeks.

The government must hold

The press conference was a purely internal party affair. Indeed, Merkel only appeared because Kramp-Karrenbauer, as one of the candidates, has withdrawn from many of her duties as general secretary to preserve neutrality.

But still Merkel was at pains to stress her commitment both to preserving her government's stability in the coming weeks, and remaining in office until the end of the legislative period. The question is legitimate: should the CDU choose a significantly more conservative leader, it will place even more strain on her coalition with the Social Democratic Party (SPD), which is itself stuck in an existential crisis over its political identity.

"There is a common conviction that we should continue governing on the basis of the coalition contract," Merkel said. "That's an important message, which will lessen concerns." She added that she had been in contact with French President Emmanuel Macron, and said that a democratic search for a party leader was normal in Europe.

SPD leader Andrea Nahles, who appeared at her party's headquarters an hour later, also insisted that the German government would carry on, despite heavy losses for its two parties in recent regional elections in Bavaria and Hesse.

The idea of breaking the grand coalition with Merkel's party "had not even come up" in the discussion, Nahles told reporters in a brief press conference, at which the entire party leadership appeared to stand in a row behind her in an overt sign of solidarity.

The SPD is arguably in an even deeper crisis than the CDU, given that the latest opinion poll numbers put the Social Democrats at only 13 percent. But Nahles struggled to answer what exactly the party was planning to do in government, apart from pushing for certain  key concerns: better pensions, affordable housing, and better pay for careworkers.

Keeping the party together

Another potential worry for Merkel is that, if the CDU chooses Merz as leader, personal animosity could increase tensions between the chancellor and her party. Merz, whose candidacy announcement last week took many by surprise, was elbowed out of his post as parliamentary group leader by Merkel in 2002, and has long been considered a critic of her leadership style.

"My relationship with Friedrich Merz was always that we exchanged views as two people passionate about politics, and where we worked together we always found solutions," Merkel told reporters on Monday. "Of course we weren't always of the same opinion, but that happens rarely, that one is always of the same opinion with everyone." (For his part, Merz made similar noises last week.)

But despite the discontent on the right of the party, and the perception that valuable ground has been lost to the far-right AfD, a new poll released on Monday shows that the majority of Germans are against the CDU shifting their political line further to the right.

The survey, carried out by Forsa for the broadcasters RTL and n-tv, found that only 29 percent wanted the center-right party to follow the more conservative course advocated by Spahn and Merz, whereas 63 percent said it would be wrong for the CDU to change position. Perhaps even more surprisingly, as many as 65 percent of CDU supporters believed Merkel's position was the right one.

The survey showed that Merkel's politics also have an advantage in the generational battle: younger people prefer her centrist approach than a hard-line traditional conservatism. That would be bad news for Merz, for example, who used his press conference last week to call for the CDU to return to its "core brand" conservatism.