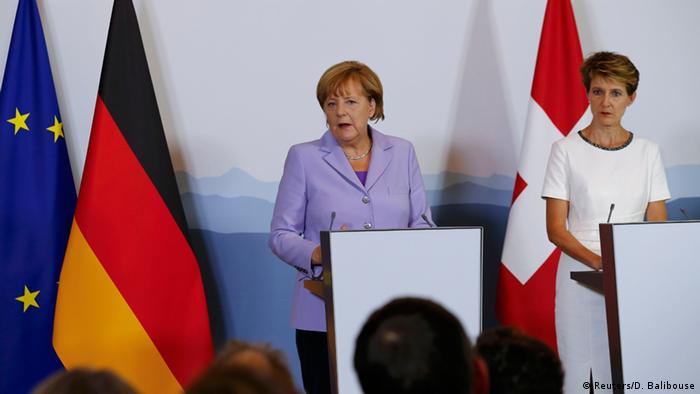 During her visit to Switzerland on Thursday, Chancellor Angela Merkel told journalists that "Germany is doing what is morally and legally required of it. Nothing more, nothing less," referring to the refugee crisis.

Orban called the refugee influx "a German problem rather than a European one," adding that his government had taken all steps possible to comply with European Union regulations in dealing with an ongoing influx of migrants traveling through Hungary.

The Chancellor also urged Hungary to comply with the Geneva Conventions regarding the treatment of war refugees. "These are agreements that all EU member states are obligated to, not just Germany," she said. "This is a problem that concerns us all."

The refugee crisis and Switzerland's relations to the European Union were the focus of Merkel's visit to Switzerland. The Alpine, land-locked country is not a member of the EU.

France and Germany are to make joint proposals on how to host refugees and distribute them fairly across Europe, President Francois Hollande's office said in a statement on Thursday after a telephone conversation between Hollande and Merkel.

"The European Union must act in a decisive manner and in line with its values," the statement said. "These men and women, with their families, are fleeing war and persecution. They need international protection."

The statement added that the two countries wanted to converge standards to strengthen the European asylum system, ensure the return of illegal migrants back to their country of origin and to provide necessary support to nations where migrants come from and the countries they pass through.

There were protests at a train station in the Hungarian town of Bicske when police in riot gear obliged migrants to get off a west-bound train. Passengers refused to be taken to a Hungarian migrant-reception center. (03.09.2015)

Tens of thousands have petitioned the UK government to do more about the influx of refugees fleeing violence and seeking safety in Europe. Britain resists proposals for an EU-wide quota system for accepting refugees. (03.09.2015)

A photograph of dead three-year-old Aylan Kurdi on a Turkish beach has sparked outrage and horror across the world, giving a face to the human cost of Europe’s refugee crisis. Warning: contains graphic images. (03.09.2015)