Chancellor candidate Armin Laschet said Germany must hit its 2% of GDP NATO defense spending target. The remarks are aimed at his top rival, Annalena Baerbock, who has spoken out against the NATO commitment. 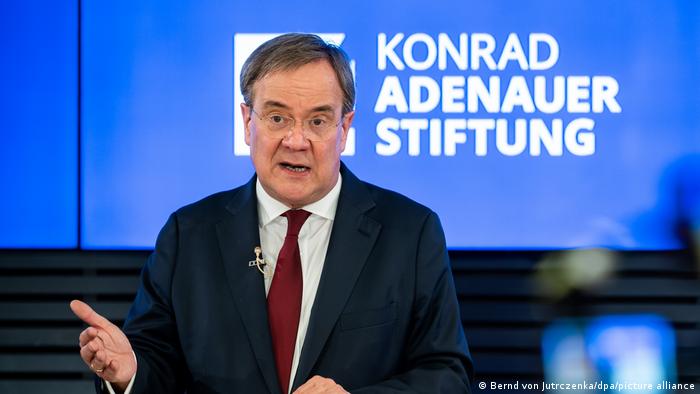 Armin Laschet, the conservative Christian Democratic Union (CDU) party's candidate to be chancellor, on Thursday called on Germany to uphold its goal of spending 2% of its GDP on defense, in line with NATO commitments.

Laschet made the comments at the CDU-aligned Konrad Adenauer Foundation in Berlin during an address outlining his foreign policy priorities.

Laschet said the defense spending commitment "should be expected from anyone who strives for the highest offices in Germany" and claimed citizens have a "right" to know where candidates stand on foreign policy and security issues.

Laschet said candidates that are not clear on the defense spending issue would be shirking their responsibilties as chancellor.

The comments are a clear jab at his top rival, Green Party chancellor candidate Annalena Baerbock, who has previously criticized the NATO target as "absurd" and "not really helpful."

Baerbock previously told the Frankfurter Allgemeine Sonntagszeitung in April that the 2% goal would not "achieve greater security."

Finance Minister Olaf Scholz, the chancellor candidate for the center-left Social Democratic Party (SPD), has also not made the target a priority in his proposed budget plans, despite his personal support for NATO.

Germany spent 1.57% of its GDP on defense in 2020, falling short of the 2% target. Former President Donald Trump had previously pushed Germany to spend more on defense in line with NATO commitments, complicating ties between Berlin and Washington during his tenure.

In addition to NATO defense spending, Laschet outlined his pragmatic strategies towards Russia and China, in contrast to Baerbock's more hardline approach towards those countries.

Laschet said Russia could be a "partner" in certain areas. "But on the other hand, where international rules are violated, Russia must be shown where the line is," he said, referring to the Russian annexation of Crimea in 2014.

Laschet approves of the Nord Stream 2 pipeline between Russia and Germany, saying the government under Chancellor Angela Merkel is "following the right course" on the issue. Baerbock wants Germany to cancel the project for environmental and geopolitical reasons, as it would hurt Ukraine, a German ally.

Baerbock: We must make changes to create a fair country

At the same time, Laschet said he would discuss the Nord Stream 2 project with Baerbock.

"If she thinks she wants to protect Ukraine strategically, I would agree with her," Laschet said.

Laschet characterized China as a "partner, competitor and rival," noting the economic relations between the two countries are "of great relevance." He said Germany and China have differences when it comes to "human and societal questions."

Baerbock has said Germany should crack down on Chinese goods that are the result of forced human labor. She has also expressed concerns about Chinese technology, such as 5G equipment made by Shenzhen-based telecommunications giant Huawei.

Laschet also promoted the ideas of a transatlantic trade zone and a closer European foreign policy during his address.

"And we need a revival with new themes, with a new dynamic of the transatlantic relationship. And this will revolve around trade issues — a large free trade area as an ambition, but also a common climate policy," he continued.

Baerbock has promoted the idea of a "transatlantic Green deal," an environmentally-friendly trade agreement between Europe and the US.

Laschet called on European countries to cooperate more closely on foreign policy. In addition, he reiterated Germany's support for Israel.

He also proposed the idea of a German National Security Council that could better facilitate Germany's federal response to external threats.

How are German parties faring among voters?

German voters will head to the polls on September 26 to elect a new parliament, and, as a result, the next chancellor. This federal election is especially significant as Merkel will retire after governing the country for nearly 16 years.

A survey conducted from May 10 to 11 by German research institute Infratest dimap found the Green Party leading the race with 25% support among citizens, with the CDU garnering 24% support.

The Infratest dimap poll found 15% support for the SPD and 12% for the Free Democratic Party (FDP).

Germany's Transatlantic Coordinator: We can build a 'New West'