Lawmakers condemned recent antisemitic incidents in Germany and said Israel has a right to self-defense. Some political leaders called for a two-state solution for Israelis and Palestinians. 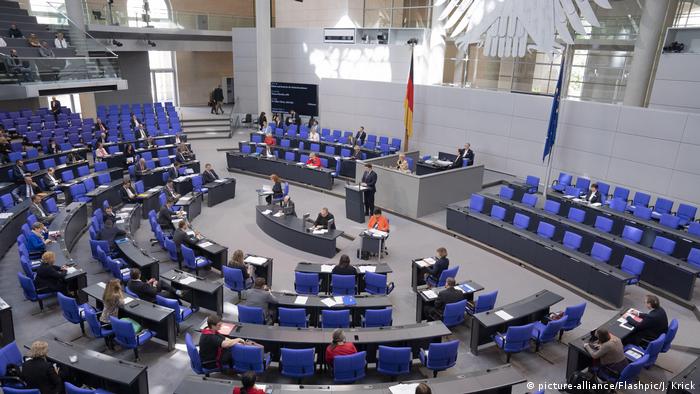 A session of the German Bundestag

German lawmakers on Wednesday condemned recent antisemitic incidents in Germany during a debate in the lower house of parliament (the Bundestag) over ongoing tensions between Israelis and Palestinians. Multiple antisemitic incidents have occurred recently during pro-Palestinian protests across the country, with police ramping up security at Jewish synagogues and other sites.

"There shouldn't be one centimeter of space for antisemitism on our streets. Never again," Maas said.

The German Foreign Minister also said Israel has a right to defend itself and spoke out against Hamas' "rocket terror" against Israel.

Maas said he would leave for Jerusalem and Ramallah on Wednesday evening to take part in diplomatic discussions.

He called for an end to attacks on Israel, a cease-fire agreement, and direct talks between Palestinians and Israelis to put an end to the conflict. He said he was convinced that a two-state solution based on negotiations remained the only way forward.

Norbert Röttgen, a Christian Democrat (CDU) politician who chairs the Bundestag Foreign Affairs Committee, said we "have to change something." He said Germany should take a more active role and not ignore the conflict, or else violence would escalate in the region.

"It is our foreign policy duty to make this conflict a European priority," Röttgen asserted. He said Germany should work with other European countries to engage the Middle East region.

"We have to deal with this social reality, in terms of both domestic and foreign policy," he said.

Alexander Graf Lambsdorff, a member of the pro-business Free Democratic Party (FDP), shared an emotional story during the debate about antisemitism in his local community.

"I visited the local Synagogue in Bonn in my district," Lambsdorff said. He noted that stones had been thrown at the Jewish holy site, with Israeli flags having been set on fire in front of its doors.

"Anyone who throws stones at synagogues is attempting, under false pretenses, to spread hatred and incitement against Jews," Lambsdorff said. The lawmaker is the head of the German-Israeli parliamentary group.

In an interview with DW on Wednesday, Lambsdorff claimed Hungary was blocking the European Union from taking stronger actions towards the crisis. He also said he supported reactivating the Middle East Quartet (the US, UN, EU and Russia) to negotiate the conflict, but added "it is impossible to find a legitimate interlocutor on the Palestinian side."

Armin-Paul Hampel, a member of the far-right Alternative for Germany party, decried the recent violence and Hamas' rockets towards Israel.

He also slammed the German government's approach to the conflict, and claimed without evidence that humanitarian help for the Palestinians was "co-financing Hamas with German tax money." "These acts of violence must only be ended as quickly as possible, but we also have to be careful that neighboring countries are not drawn into the conflict," Hampel said about ongoing tensions.

"What irritates me the most, is the silence from Washington," Hampel added, referring to President Joe Biden's response to the tensions. He praised the Abraham Accords that were negotiated under former President Donald Trump's administration and sarcastically said Biden should receive the Nobel Peace Prize for the latest violence in the region.

Israel-Gaza: Many children among victims of conflict

What triggered the latest round of tensions between Israelis and Palestinians?

The Bundestag debate comes as the fighting between Israel and Hamas in the Gaza Strip continues.

The tensions began earlier this month, when several Palestinian families were threatened with eviction from the east Jerusalem neighborhood of Sheikh Jarrah. Jewish settlers claim in court that the land in Sheikh Jarrah was owned by Jews prior to 1948.

Israel delayed the court hearing on the evictions in order to defuse tensions.

Escalation continued further when Israeli security forces broke up Muslim worshippers at the holy Al-Aqsa mosque. Muslims typically congregate for group prayer at the sacred site during the holy month of Ramadan.

In response to rising tensions, Hamas last week threatened to shoot rockets at Jerusalem if Israeli forces would not leave the Temple Mount. Israeli troops did not leave the premises, with the fundamentalist group firing rockets at the holy city for the first time since the Gaza War of 2014.

Israel in response began striking Hamas-affiliated targets in Gaza, in an operation the Israeli military calls "Guardian of the Walls," a reference to Jerusalem.

Israel-Gaza: Children traumatized by fighting – DW speaks to Mazen Naim from Save the Children

So far, 227 Palestinians have been killed from the violence as of Wednesday, with 12 people in Israel also killed.

Israeli Prime Minister Benjamin Netanyahu said Wednesday that he was "determined" to continue the operation in Gaza, despite President Joe Biden calling for significant "de-escalation" of the fighting.

How have other German leaders responded to recent antisemitic incidents?

Pro-Palestinian protests against the ongoing Israeli operation in Gaza have taken place across Germany. Attacks on Jewish sites and the burning of Israeli flags by protesters have been widely condemned among top German leaders.

"We will not tolerate the burning of Israeli flags on German soil and attacks on Jewish facilities," Interior Minister Horst Seehofer told the Bild am Sonntag newspaper in comments published on Sunday. "Anyone who spreads antisemitic hatred will feel the full force of the law."