Thousands of people joined the demonstrations in Germany against Israel's bombardment of Gaza. There were some isolated clashes with police reported in Berlin. Similar protests took place in several cities around the world.

Police counted more than 2,500 people in Frankfurt on Saturday afternoon after a court overturned the city's attempt to block a protest on the grounds that bans can only be declared once "milder means," such as rules imposed on the demonstrators, have been exhausted.

City authorities had argued that the planned protest could endanger public safety and could become the "starting point for antisemitic statements, threats and acts." Several such incidents have been reported in Frankfurt and other German cities in the past few days.

The Frankfurt protest was eventually disbanded by police at around 6 p.m. as, according to police, protesters had not kept social distancing guidelines. 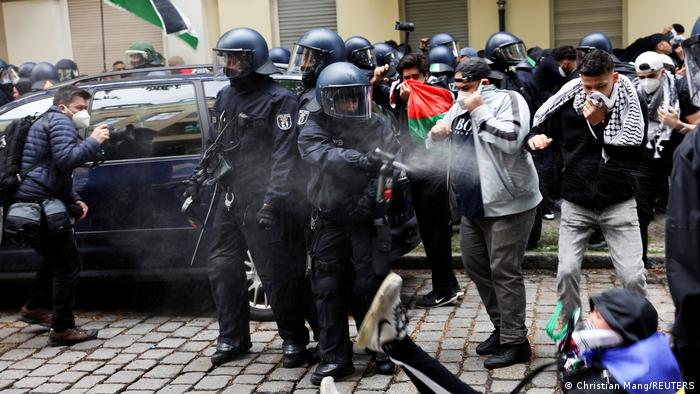 There were some altercations between police and protesters in Berlin

Opposing protests were also happening in Leipzig's city center on Saturday afternoon. Police said about 400 people took part in a pro-Palestinian demo, facing an estimated 200 people at a pro-Israel protest. A police spokesman told the dpa news agency that the atmosphere had briefly flared between the two sides, but had subsequently calmed down.

Around 2,500 people also gathered in the Neukölln district of Berlin on Saturday in the early afternoon, marching to the district's town hall waving Palestinian flags. It was one of three pro-Palestinian demos that had been registered in the German capital.

Police said some bottles and other objects were thrown at them when they attempted to break up the demo on the grounds that social distancing was not being observed. DW reporters on the ground said that the protests have been largely calm, though some isolated clashes with police did break out.

There were also some violent altercations between rival groups and with the police at a demo of some 600 pro-Palestinian protesters in the southern city of Stuttgart.

The rallies have been organized as Israel's bombardment of the Gaza Strip and rocket attacks against Israel by Hamas intensify.

At least 136 people have been killed in the blockaded Palestinian territory since hostilities erupted on Monday, including 34 children. Nine people in Israel have been killed. Hundreds have been injured on both sides.

Saturday's pro-Palestinian protests also mark Nakba Day, as Palestinians call the "catastrophe" of Israel's creation in 1948, which turned hundreds of thousands of people into refugees.

Germany's top officials have warned protesters not to use them as a platform for antisemitism.

German President Frank-Walter Steinmeier told Friday's edition of the tabloid Bild newspaper, "Whoever burns Star of David flags or shouts antisemitic slogans on our streets is not only abusing the right to demonstrate but committing a crime."

A number of antisemitic and anti-Israel incidents have been reported in Germany since the outbreak of the conflict in the Middle East.

Israel flags were set alight in Bonn, Dusseldorf and Munster in the western state of North Rhine-Westphalia (NRW).

In the city of Gelsenkirchen, in the same state, 180 people marched from the train station to a synagogue, chanting antisemitic slogans.

Israel's ambassador to Germany, Jeremy Issacharoff, asked on Friday for German authorities to "do everything to ensure the security of our community here."

It was appalling to see the hatred expressed towards German Jews and synagogues in recent days, Felix Klein, the German government's Commissioner on Antisemitism, told DW on Friday.

"To make them responsible for the acts of the Israeli government is not acceptable at all," he said.

Klein called for additional security measures to protect Jewish institutions and hoped that those who commit antisemitic crimes would be held responsible for their deeds.