US President Donald Trump presided over the signing of normalization diplomatic ties between Israel, the UAE, and Bahrain, hoping to boost his re-election chances. 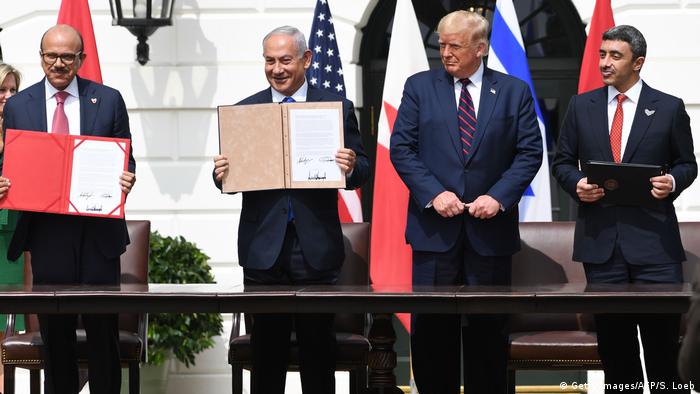 Israeli Prime Minister Benjamin Netanyahu said the normalization deals his country was signing with the United Arab Emirates and Bahrain could "end the Arab-Israeli conflict once and for all," at a signing at the White House on Tuesday.

"This day is a pivot of history, it heralds a new dawn of peace," he told reporters. "Long after the pandemic has gone, the peace we make today will endure."

He said he hoped the move would one day expand to include other Arab states.

"We're here this afternoon to change the course of history,'' Trump told hundreds of people gathered on the White House's South Lawn. "After decades of division and conflict, we mark the dawn of a new Middle East.''

But some analysts have said that the actual achievements of the deal are modest, on the grounds that they merely formalize ties between the nations that had been thawing anyway, and that all three share an interest in opposing Iran's influence in the region.

Meanwhile, as the accords were being signed, rockets were fired into southern Israel from the Hamas-controlled Gaza Strip. Two people were slightly wounded. Israel subsequently carried out airstrikes in Gaza on Wednesday morning.

The agreements do not directly address the decades-long Israeli-Palestinian conflict, though Israel has pledged to freeze its plans to annex the West Bank.

Palestinian authorities have rejected the deals as a stab in the back delivered by fellow Arabs. Palestinian President Mahmoud Abbas said in a statement on Tuesday that the agreements will not lead to regional peace.

Iran and Turkey have both condemned the agreements, which could signal major shift in the region, particularly if Saudi Arabia and other Arab countries normalize relations with Israel.

Trump's supporters hope that the deal will burnish his image in election season.

Speaker of the House Nancy Pelosi, a Democrat, said US lawmakers called for more details on what the agreements actually entailed.

The White House has steadily lobbied Arab Gulf states to open full diplomatic relations with Israel. Bahrain is now onboard alongside the UAE, and US President Donald Trump claims more will follow.