Iran has said the establishment of diplomatic ties between its arch-rival Israel and the United Arab Emirates is a "dagger in the back" of all Muslims, while Turkey said the UAE had "betrayed" the Palestinian cause. 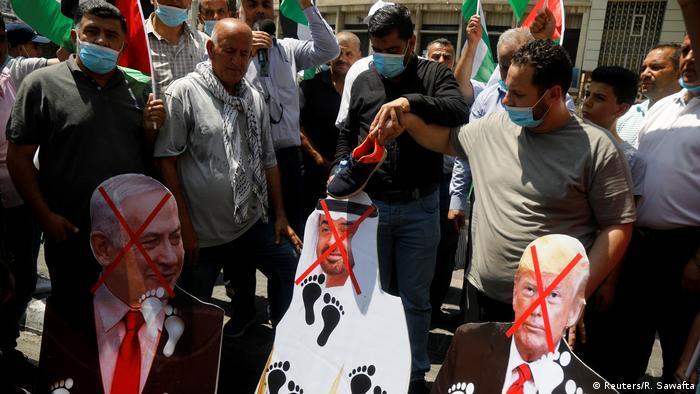 Iran and Turkey on Friday resoundingly condemned the  normalization of ties between Israel and the United Arab Emirates (UAE).

Iran called the deal a "dagger in the back" of all Muslims and an act of "strategic stupidity" by the UAE, according to Iran's foreign ministry statement.

In separate remarks, Iran's Foreign Minister Mohammed Javad Zarif slammed the deal as a "theater" fabricated by the US.

"They (US) think that by fabricating the theater like the one that happened yesterday, unfortunately, that they can determine the fate of Palestine," Zarif said in televised comments during a visit to Lebanon.

A spokesman for Palestinian President Mahmoud Abbas said Thursday the deal amounts to "treason,'' and should be reversed.

The Turkish Foreign Ministry issued a statement supporting the Palestinian administration, saying that the "history and the conscience" of the region's people will not forget and never forgive the "hypocritical behavior" of the United Arab Emirates in agreeing to a deal with Israel.

"While betraying the Palestinian cause to serve its narrow interests, the UAE is trying to present this as a kind of act of self-sacrifice for Palestine," the foreign ministry said.

The head of Lebanon's powerful Hezbollah militia, Hassan Nasrallah, also slammed the deal as a betrayal of Palestinians and a "stab in the back."

Speaking on Lebanese television, Nasrallah said the deal was done as a favor to US President Donald Trump who needed "an achievement" ahead of the November elections. The agreement was also a favor for a "weak" Israeli Prime Minister Benjamin Netanyahu, according to the militant leader.

At the same time, Nasrallah said that several Arab countries could follow the United Arab Emirates' lead on Israel to "satisfy" Washington.

While he did not provide details, some have speculated that US allies Bahrain and Oman might be next in line. Both Gulf nations have welcomed the deal between the UAE and Israel.

Former Israeli ambassador to Germany, Avi Primor, slammed the deal in a DW interview over its treatment of Palestinians.

"That what is offered to Palestinians in there is — I am going to say this carefully — disgraceful," said Primor, who served in Berlin between 1993 and 1999.

"They are not getting a state, they are getting some fragmented land — surrounded by Israel, without full rights, so actually a fragmented autonomy. And they may not get even that," he said.

"This is of course very disappointing and very bitter," Primor added.

Part of Washington's Middle East strategy under President Donald Trump has been to contain Iran by promoting diplomatic ties between Israel and the US' Gulf-state allies.

In its statement Friday, Tehran warned the UAE against allowing Israel to interfere in the "political equations" of the Persian Gulf region.

Read more: Opinion: Ayatollah Khamenei and the 'final solution' in the Middle East

The UAE has been growing its commercial and military clout in the Gulf region. For example, Abu Dhabi has been a leading member of the Saudi Arabia-led coalition opposing Tehran-aligned Houthi rebels in Yemen's civil war.

Who supports the deal?

German Foreign Minister Heiko Maas said Friday he congratulated his Israeli counterpart, Gabi Ashkenaz, on taking a "historic step" and welcomed Israel's suspension of annexation plans. Maas said the move could give a "new impetus" towards peace in the Middle East.

Speaking to Reuters, Spain's Foreign Minister Arancha Gonzalez Laya also said it was important to "use this context to give an impulse to the negotiations between Israel and Palestine" based on the two-state principle.

The agreement makes the UAE the first Gulf Arab state, and the third Arab country following Egypt and Jordan, to establish full diplomatic ties with Israel.

In Thursday's announcement, Israel and the UAE said deals including travel, trade, embassies and security cooperation are expected in the coming weeks.

Egyptian President Abdel Fattah al-Sisi praised the deal for "halting Israel's annexation of Palestinian land, and said he hoped it would bring "peace."

Jordan said Thursday that the deal's impact on the peace process depends on the actions Israel will take. Jordanian Foreign Minister Ayman al-Safad said Israel must end its "illegal actions" and its "violations of Palestinian rights".

As part of the deal, Israel pledged to suspend annexation of Palestinian lands, although Prime Minister Benjamin Netanyahu later stressed that does not necessarily mean Israel will abandon plans to annex the Jordan Valley and Jewish settlements across the occupied West Bank.

US President Trump said he would host the Israeli and UAE leaders at the White House for the signing of the deal in around three weeks.