Protesters took to the street against Israeli government plans to annex parts of the West Bank. The areas are land Palestinians want as part of an independent state. 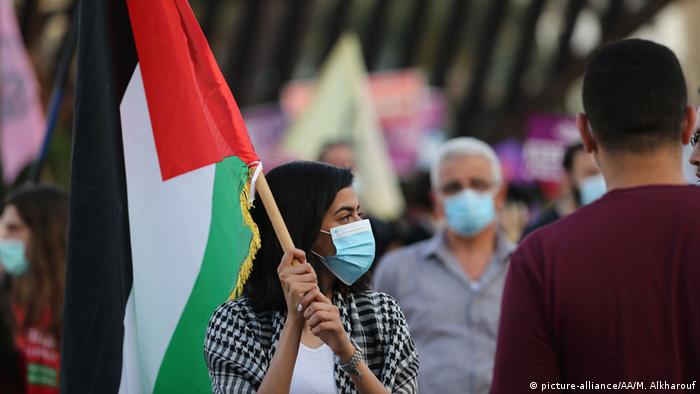 Thousands of Palestinians and Israelis protested in Israel on Saturday against Israel's plan to extend sovereignty over parts of the West Bank. The protesters carried banners saying "No to annexation, no to occupation, yes to peace and democracy" and Palestinian flags.

The protesters gathered after the police issued a permit on Friday night, on the condition that they maintain a 2-meter (6.5-foot) distance between each other. The protests were reportedly organized by left-wing groups.

The leader of Meretz, a left-leaning Israeli party, called the annexation decision by Prime Minister Benjamin Netanyahu's government a "war crime" and a "crime against democracy."

US Senator Bernie Sanders also addressed protesters in a video and expressed his support for the demonstration. "It's up to all of us to stand up to authoritarian leaders and to build a peaceful future for every Palestinian and every Israeli," said Sanders.

The situation in West Bank

The latest Israeli elections, and US President Donald Trump's controversial peace plan, have given Israel more room to exert its control over the West Bank, a contested territory that the Palestinians seek as part of an independent state.

The new Israeli coalition agreement between Netanyahu's Likud party and Defense Minister Benny Gantz's Blue and White party allows for the annexation of the Jordan Valley in the occupied West Bank and respective Jewish settlements as early as July.

Last month, Palestinian President Mahmoud Abbas declared an end to all agreements and understandings with Israel and the US in response to Israel's plans to annex settlements and the Jordan Valley.

Earlier this week, Netanyahu said that the annexation of the land would happen independently of Trump's Middle East plan. According to a recent poll by the Israel Democracy Institute, 50.1% Israelis support annexation of the Jordan Valley.