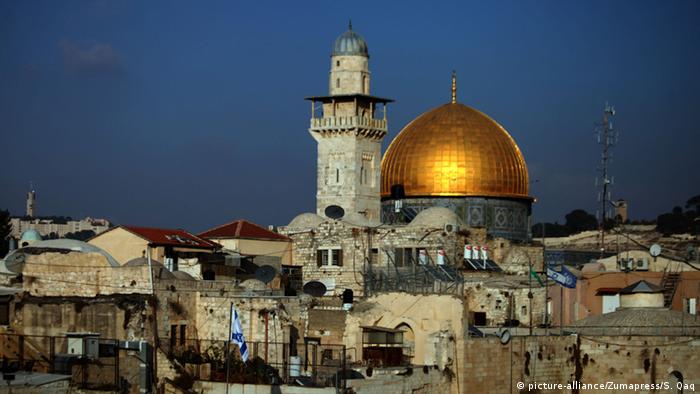 You don't have to agree with the choice of words, but Palestinian President Mahmoud Abbas' assessment was spot on: The historic agreement between Israel and the United Arab Emirates (UAE) is a "betrayal" of Palestinian interests.

Although the deal that Abu Dhabi agreed to requires a suspension of Israel's annexation plans in the occupied territories, it does nothing to end them — as Israeli Prime Minister Benjamin Netanyahu immediately pointed out after the agreement was signed.

Hypocritical pledges of solidarity from all sides

Still, the question remains of whether the UAE could have done more for its "Palestinian brothers" as it negotiated the deal with Israel and the US. It seems apparent that it just didn't matter that much to them. The UAE has other strategic interests and solidarity with the Palestinians was never anything more than hypocritical posturing anyhow.

That is unfair and no doubt bitter for the Palestinians, but it is simply part of an unstoppable trend in the region. These days, it is not Israel, but rather Iran — and increasingly Turkey — that most leaders view as a dangerous "invader." Therefore, it has become a top priority to keep both adversaries at bay. In this regard, Israel has also become an attractive and natural partner — especially when it comes to Iran. Israel is at the cutting edge, both militarily and technologically, and it rightly views Iran, and its allies in Syria, Lebanon, Iraq, Yemen and Gaza, as the biggest threat to Israeli national security.

It was to be expected that Tehran and Ankara would sharply reject the deal. But the agreement will also afford both the opportunity to present themselves as unyielding allies of the Palestinian people, buttressing their claims to power within the Muslim world. Yet, their solidarity with the Palestinian people, too, is little more than a cheap veil designed to mask their true interests.

The abysmal failures of Palestinian leadership

Truth be told, the Palestinians long ago lost their fight to create an independent state alongside Israel. The harsh reality is that no one really cares anymore. That is not because of Israeli settlement policies, a shift in priorities in the Arab world or Donald Trump's own reelection efforts. No, it is because Palestinian leaders have, for decades, been unable to develop a vision — beyond protest and violence — that could mobilize the support of the international community.

Thus, Palestinian leadership bears at least some responsibility for the fact that new alliances are being forged between Israel and other countries throughout the Middle East — with more to come no doubt. It is certainly tragic for the Palestinians that they are being left out in the cold as neighbors agree to peace with Israel, but that peace is good for the rest of the region.