Canada has once again approved a contentious pipeline expansion that would allow the nation to diversify oil markets. The new pipeline has drawn criticism from environmental groups that fear spills. 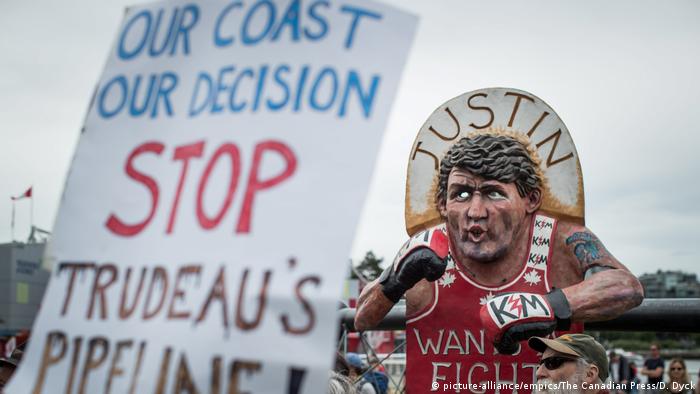 The pipeline expansion would nearly triple its capacity from 300,000 to 890,000 barrels per day. The pipeline will deliver crude from the landlocked Canadian province of Alberta to British Colombia on the west coast.

Trudeau told a news conference that construction on the pipeline expansion is scheduled to resume this year, but the new plan is expected to face a legal challenge from environmental groups.

Ottawa previously approved expansion of the pipeline in 2016, but the decision was overturned last year after a court ruled that the original study lacked adequate consultations with First Nations peoples.

In an effort to salvage the project, the Canadian government purchased the pipeline, which has been in use since 1953, for 4.4 billion Canadian dollars ($3.3 billion, €2.9 billion) from Kinder Morgan Canada Ltd. last August.

Finance Minister Bill Morneau said the pipeline would eventually be sold once it becomes commercially viable.

Tuesday's approval came a day after Trudeau declared a national "climate emergency" and a week and a half after he proposed a ban on single-use plastics.

The Canadian prime minister, who faces an election in October, has been under pressure from both western Canadian politicians who accuse him of not doing enough to help the country's struggling oil industry and from environmental groups and indigenous leaders who fear spills.

The pipeline would allow Canada, which has the world's third-largest oil reserves, to diversify oil markets and vastly increase exports to Asia. Currently, 99% of exports go to refiners in the United States, where limits on pipeline and refinery capacity cause Canada to sell oil at a discount.

"It's really simple. Right now, we basically have one customer for our energy resources, the United States. As we've seen over the past few years, anything can happen with our neighbors to the south," Trudeau said, seemingly alluding to US President Donald Trump's turbulent tenure.

Video explainer: Could soil save our climate?

However, many indigenous people fear the 620 miles (1,000 kilometers) of new pipeline will threaten their lands. Environmental groups also fear that increased shipping from the marine terminal in Vancouver, a west coast seaport in British Colombia, could affect marine life.

Trudeau insisted that the pipeline expansion was in the "national interest," but he said every dollar Canada earns from the project will be invested in clean energy.

"This isn't an either/or proposition. It is in Canada's national interest to protect our environment and invest in tomorrow, while making sure people can feed their families today," he said.

How the oil industry and Russia trivialize the Druzhba pipeline disaster

The Russian government and European oil refineries have reported only sparsely and misleadingly about a big pipeline disaster that has sent customers scrambling for alternative supplies and led to refinery outages. (03.06.2019)