Anxious gas and oil workers in Canada have demanded an end to what they see as job-killing anti-pipeline policies. But Ottawa faces a dilemma: How to balance job security for those workers while fighting climate change? 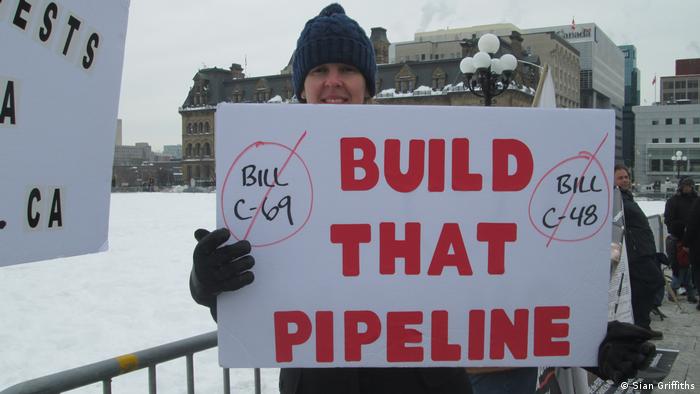 Weeks after the "United We Roll" protesters roared into Ottawa, the echoes of the horn blasts from hundreds of their trucks still linger in Canada's capital.

Ottawa hadn't seen anything like it. The mostly male protesters, many dressed in hard hats, overalls and heavy work boots, weren't the usual activists one sees on Parliament Hill.

In mid-February, they seized national attention with their angry calls to "Build that pipe!" referring to a multibillion-dollar Trans Mountain pipeline project in western Canada which stalled last year and resulted in job layoffs.

Their message was amplified by a powerful, deafening chorus of horn blasts from the huge number of trucks blocking the front of the Parliament buildings.

While the protesters have returned home, the issue of balancing competing interests — battling climate change and protecting the environment on the one hand, and job security for gas and oil workers on the other — still hangs in the air.

'Oil pays the bills in Canada'

Canada is oil rich. It has the third biggest oil reserves in the world, and is the top exporter of crude oil to its southern neighbor, the United States. The western province of Alberta is the country's oil and gas-fueled energy powerhouse. Over 300,000 jobs in Alberta — and a further 200,000 across Canada — depend on the oil sands industry.

Prosperity in Alberta's oil patch means prosperity for Canada. As Patricia Mohr, an economist and commodity market specialist, describes it: "Oil pays the bills in Canada, oil pays the rent."

Every year, the Canadian government gets $20 billion CAD ($14.9 billion/€13.2 billion) in revenue from Alberta thanks to its prosperous oil and gas industry. That money is then redistributed, in what's known as equalization payments, to "have not" provinces, regions of Canada which can't raise money like Alberta.

That money helps to build roads, schools and hospitals which benefit all Canadians. However, if pipelines aren't built and the oil sands can't be expanded, supporters say, Canada's prosperity — and the job security of oil and gas workers — is at risk, and so is all of that Alberta-generated revenue.

Canadian oil is currently sold at a heavy discount, far below market value, as producers haven't succeeded in accessing other markets, Asia chief among them. This is why landlocked Alberta needs to build pipelines to the Pacific coastal waters of neighboring province British Columbia in order to export its product. 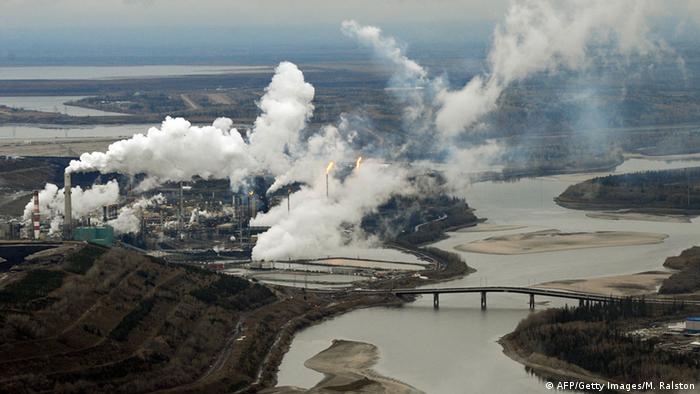 The oil industry is a key player in Canada's Alberta province

While Prime Minister Justin Trudeau has rejected one pipeline — the Northern Gateway — after banning tanker traffic due to environmental concerns in Northern British Columbia which effectively killed off the project, he has approved the construction of another, the 1,150-kilometer (715-mile) Trans Mountain, which the federal government purchased last August, effectively nationalizing it.

Trudeau has often said that protecting the environment and growing the economy go hand in hand — that you can be pro-environment and pro-economy. But it was a newspaper south of the border, The New York Times, which exposed his strategy as a "two-faced climate game." You can't be a climate crusader and build pipelines, it argued last May.

Will this pipeline ever get built?

Building the Trans Mountain would represent a dramatic expansion of the oil sands project. It could potentially triple capacity from 300,000 to 900,000 barrels a day. The plan would also lead to an eightfold increase in the number of oil tankers, and secure many jobs.

But last summer, a court ruled that regulators had failed to adequately consult with Pacific coast indigenous groups and didn't properly consider the impact on the already endangered killer whale population.

While the future of the pipeline remains unsettled, thousands of well-paying jobs are being lost — and that's in addition to jobs lost due to automation. 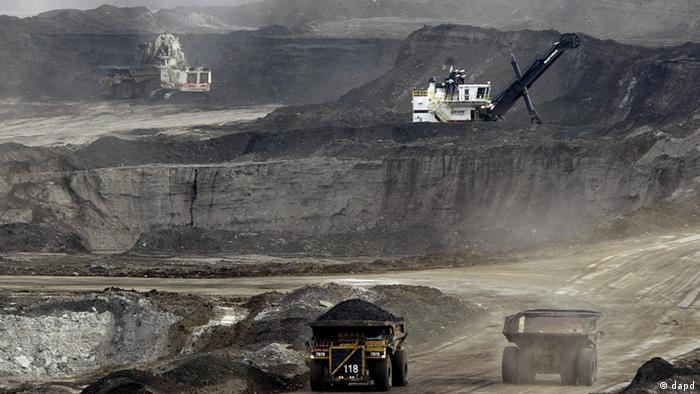 Critics of the oil sands say the oil is "dirty." It takes at least 2.5 barrels to produce just one barrel of bitumen, the heavy, tar-like form of crude oil which needs to be diluted in order for it to flow through a pipeline. As well, features of oil sands production — open-pit mines and toxic tailings ponds — blight the landscape. Thousands of birds have died due to their exposure to these ponds.

Oil sands production alone accounts for 10 percent of Canada's greenhouse gas emissions, or 0.1 percent of global emissions. While producers argue that emissions have dropped by a third per barrel, thanks to improved technology, oil sands expansion means those emissions will increase.

Critics also worry the construction of the Trans Mountain will increase the risk of oil spills near the pipeline's marine terminal on the ecologically sensitive Burrard Inlet in British Columbia. They also argue that Canada will struggle to cut greenhouse gas emissions by 200 million tons a year by 2030, one of its climate goals, should the Trans Mountain go ahead.

Meanwhile, pro-pipeline activists, like the United We Roll campaigners, are fighting for an end to what they see as job-killing anti-pipeline policies, like the carbon tax. It's intended to encourage Canadians and big business to reduce their dependency on fossil fuels, and was first introduced in Alberta in 2017. In April, the Canadian government will ensure all Canadians are under some form of carbon tax.

The pro-pipeline activists are also seeking to kill Bill C69, environmental assessment legislation, which its critics have dubbed the "no pipeline ever" bill. They believe it could slow down the approvals process for large industrial projects. They also want to see another bill banning oil tankers along British Columbia's northern coast thrown out.

Canadians will get a better idea which agenda will prevail — a greener agenda or fossil-fuel driven one — on April 16, when Albertans head to the polls in provincial elections.

The province's current leader, left-leaning NDP Premier Rachel Notley, has implemented a climate plan which includes a carbon tax, a cap on oil sands emissions, halving methane emissions and boosting support for its renewable energy sector. Rather uniquely, Notley's strategy had support from environmental groups and oil industry executives, who stood behind her when she announced the plan.

Notley did, however, support the expansion of the oil sands by lobbying Trudeau aggressively to get pipelines built. She even launched a boycott of wine produced in British Columbia — an awkward situation, with the province also led by a fellow NDP politician — when the province threatened to limit the amount of bitumen it would allow over its borders over oil spill fears.

Flanked by workers in overalls and hard hats, Jason Kenney, the provincial leader of the center-right United Conservative Party, launched his campaign with the slogan of "Jobs. Economy. Pipelines." He said Alberta needed "bold action," and vowed to get pipelines built, scrap the carbon tax and fight Ottawa, which he accused of trying to "block our resources."

But some climate campaigners, like Katie Rae Perfitt of 350.Org, believe a more transformative type of "bold action" is needed which could tackle climate change, help safeguard the environment and create jobs. Something more like the Green New Deal, which has been championed by US Congresswoman Alexandria Ocasio-Cortez, spurring debate not just in the US but in Canada, too.

Ocasio-Cortez's initiative is a decarbonization plan aimed at transitioning to a renewable energy-based economy over the next decade. A key component of the plan is the federal job guarantee, which would ensure that workers caught up in the transition would have a job in the new economy.

"We're going to need a lot of people to work because we're going to have to deploy a ton of renewable energy," she said. "I think there is massive opportunity for work."

Protests and opposition from the provincial government of British Columbia have shut down construction of a pipeline planned to carry oil from Alberta to BC - but Prime Minister Justin Trudeau has vowed to fight back. (23.05.2018)

Canadian Prime Minister Justin Trudeau has called for Canada to phase out its oil sand production. It's not a popular message with the province of Alberta, which has benefited from having huge oil reserves. (14.01.2017)