Canada has announced that it will ban single-use plastic products such as straws and bags starting in 2021. The government said that plastic manufacturers would be held responsible for processing the waste. 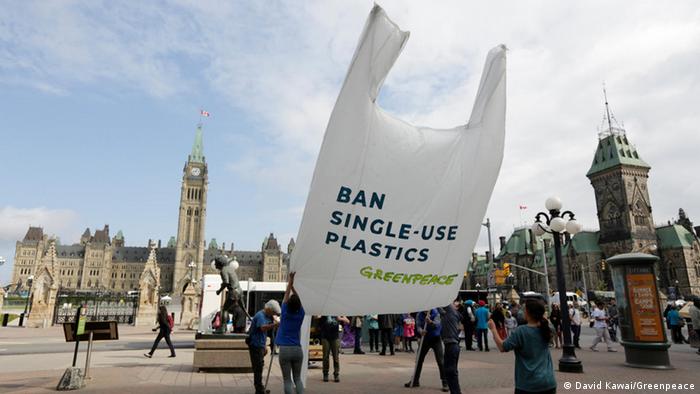 On Monday, Canadian Prime Minister Justin Trudeau announced that Canada would ban single-use plastics starting in 2021. The ban would include plastic products and packaging such as shopping bags, straws, cutlery, plates, and stir sticks. A government-sponsored scientific assessment on plastic pollution would determine whether to add further products to the list.

Plastic pollution primarily affects marine ecosystems, and the prime minister said that Canada should lead the fight against plastic pollution as the country has the world's longest coastline.

"It's tough trying to explain this to my kids. How do you explain dead whales washing up on beaches across the world, their stomachs jam packed with plastic bags?" said Trudeau. "Against all odds, you will find plastic at the very deepest point of the Pacific Ocean."

According to a statement from Trudeau's office, the ban would be implemented under Canada's Environmental Protection Act.

The European Parliament is planning a similar ban, also hoping to implement it in 2021.

Canada estimates that 3 million tons of plastic waste are thrown away in the country every year. Less than 10% of plastics are currently recycled in Canada.

Several cities in Canada already have bans on plastic bags in place. On Monday, the Canadian government announced it would support "community-led" action on reducing plastic waste.

Canada said it was waiting until 2021 to allow for a "science-based" decision on exactly which plastics "are harmful to the environment and human health."

The plan also gives time for businesses, like fast food restaurants, to adjust and find alternatives to plastic.

According to a press statement, Canada could set a required amount of recycled content for manufacturers. Also, the federal government said it would work with provincial authorities so that companies join municipalities in taking responsibility for the recycling process.

The Canadian government expects its anti-plastic crusade to add 42,000 jobs in the recycling and recovery businesses. Environmental issues are expected to be at the top of the agenda in Canada's legislative elections planned for October.