How the oil industry and Russia trivialize the Druzhba pipeline disaster | Business | Economy and finance news from a German perspective | DW | 03.06.2019

How the oil industry and Russia trivialize the Druzhba pipeline disaster

The Russian government and European oil refineries have reported only sparsely and misleadingly about a big pipeline disaster that has sent customers scrambling for alternative supplies and led to refinery outages. 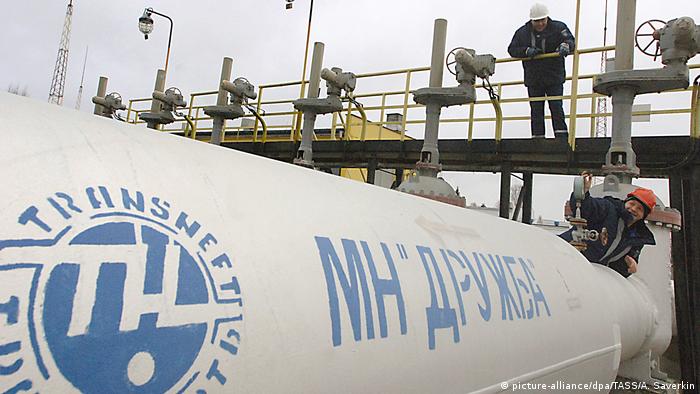 Russia is Germany's largest oil supplier. The most important route for transporting Russian oil to Europe's largest economy is the Druzhba ("Friendship") pipeline, which was built in the 1960s and transits through several central and eastern European countries, including Belarus and Poland.

The reasons for the oil contamination are still not clear. The pipeline is operated by Russia's state-owned company Transneft, which operates 68,000 kilometers (42,253 miles) of trunk pipeline and is controlled by the state.

Read more: Druzhba pipeline: The dark side of Russian oil

The crisis is estimated to have cut Russia's oil production to an 11-month low and forced some countries to tap their strategic fuel reserves. It has sent customers scrambling for alternative supplies and led to refinery outages.

The interruption in oil supplies has already led to shortages of heating oil in eastern Germany. The situation could be an existential crisis for some dealers, the oil industry association in the German state of Saxony warned last week. Fuel prices in several eastern German cities have seen a rapid rise over the past couple of weeks.

The Druzhba problem, however, hasn't received much coverage in German national media, despite it affecting a raft of European countries, including Poland, Hungary, Slovakia, the Czech Republic, Belarus and the Ukraine. The German media may have been misled by the official information policy.

For weeks, Russian officials as well as European oil firms were anxious to minimize the fallout from, or even conceal the consequences of what was probably the biggest disaster in the history of the Russian oil industry.

For instance, on the homepage of the PCK refinery in Schwedt, Germany — which has been supplied by the Druzhba pipeline since times of the former East Germany — there isn't a mention of the halt to oil deliveries.

"The crude oil issue is coordinated by our partners," PCK spokesperson Vica Fajnor told DW. And these are the Russian state-owned oil company Rosneft and its British-Dutch partner Shell, which has strong interests in Russia. It also includes the French oil company Total, which operates a refinery in the eastern German town of Leuna. Total did not respond to a DW request for comment.

Only when the Reuters news agency, referring to anonymous sources, reported in mid-May that Russian crude oil contaminated with high levels of organic chloride had damaged part of the equipment at the Leuna refinery, Total was forced to admit in a press release that some plants had been shut down for "technical inspection."

This announcement was in stark contradiction to the statements issued by the spokesperson of the German petroleum industry association MWV, Alexander von Gersdorff.

On May 29, Total CEO Patrick Pouyanné admitted to shareholders in Paris that the company could utilize only half of the capacity of the Leuna refinery due to the shutdown of the Druzhba pipeline. But this statement remained virtually unreported in German media, possibly because of the extended weekend. So it's no wonder that the public in Germany is still rather poorly informed about the supply problems that have arisen.

In contrast, the Russian public has received more information about the Druzhba pipeline problem in recent weeks. After all, the issue concerns oil — Russia's most important export and foreign exchange earner.

Moscow could not simply sweep the subject under the carpet, especially as it had already made the headlines internationally.

Much of the reporting about the problem comes from Belarus, which, as a transit country and a major buyer of Russian crude, suffered serious financial losses for its two export oriented refineries as a result of the Druzhba shutdown.

Despite its authoritarian government, Belarus has shown in this crisis how open information policy works.

Even Russian state media have constantly referred to Belarusian reports, while Moscow is busy trying to downplay the problem. Russia's Vice Prime Minister Dmitri Kosak, for instance, assured on April 26 that "the stable operation of the oil pipeline" would be "completely" restored in just two weeks. This was either a gross misjudgement of the situation or a deliberate attempt at misleading the public.

In mid-May, Russian Energy Minister Alexander Nowak then estimated the compensation that Russia would have to pay to the transit countries concerned and Druzhba customers at less than $100 million (€89.3 million). At the same time, the Russian business daily Vedomosti reported that the total damage could be at least $3 billion.

Transneft said on June 3 that deliveries of "clean" oil to Poland could resume by June 8 or 9. But a report published by the state news agency TASS doesn't mention the de facto ultimatum from Warsaw. The Polish foreign ministry told DW on May 31 that the transit of Russian oil would only be allowed after Moscow compensates customers in Poland and Germany for the damage caused and for the clean-up of the contaminated oil.

But it's unclear whether European oil companies and German refineries have voiced a similar demand. In their usual manner, the refineries, their industry association as well as their European owners have so far remained silent.

Russian authorities are investigating how oil being piped to Germany, Poland and other European countries came to be contaminated. The case triggered supply problems for European refineries. (27.04.2019)