Cambodian activists fear for the future ahead of national elections | Asia | An in-depth look at news from across the continent | DW | 12.07.2018

Critics of Cambodian PM Hun Sen face harsh punishments for reporting on corruption, which they say has eroded the country's institutions. Under one-party rule, a free press and opposition parties have also been stifled. 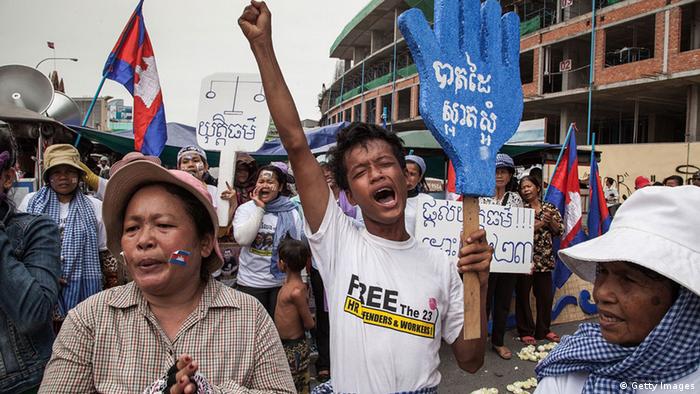 With puppets, a camera and a Facebook account, 26-year-old "Vannak" risks his life and freedom to create short videos criticizing the government of Cambodian Prime Minister Hun Sen, who has ruled the country with impunity for 33 years.

"Three things can happen to me. Either I will be deported, jailed, or killed. But that will not stop me," Vannak told DW, using a pseudonym.

Vannak is one of a few Cambodians who dare oppose Hun Sen's regime amid a brutal crackdown on freedom of speech.

In one of Vannak's videos, his puppet character "Seng-haa" directly addresses Hun Sen.

"Very few people dare to tell the truth about what is happening in Cambodia, since you have arrested many politicians, journalists, members of civil society and activists."

No formal opposition to Hun Sen

Opposing Hun Sen's Cambodian People's Party (CPP) in the Southeast Asian nation does not center on a democratic debate of differing opinions. Critics of Hun Sen want to unmask corruption, which is widespread in the Cambodian political system.

Since coming to power in the 1980s after the Khmer Rouge's reign of terror, Hun Sen has managed to be reelected prime minister in every election. For the upcoming elections on July 29, to get rid of his political opponents, Hun Sen simply abolished the opposition Cambodia National Rescue Party (CNRP).

The CNRP became officially illegal in November last year. Their parliamentary seats were redistributed to other parties that were less threatening to the CPP ruling party.

One CNRP opposition leader, Kem Sokha, was accused of conspiracy and jailed without a trial. His predecessor, Sam Rainsy, fled to Paris where he has lived for two years in a self-imposed exile. Most other CNRP members of parliament fled the country.

DW spoke with two opposition members known as "Bunthorn" and "Reaksmey" who decided to stay in Cambodia. They didn't openly say which party they belong to.

The two were on their way to visit a CNRP member who was put in prison after he was accused of being involved in an altercation.

"At the police station he was bluntly told he could walk out freely, if he would defect to the government's party CPP. He refused, and was put in prison immediately," said the opposition members. 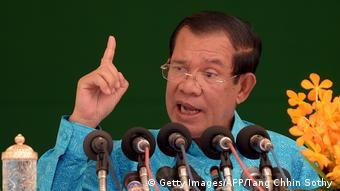 Prison as an intimidation tactic

"This is not unusual in Cambodia," Alex Gonzalez-Davidson, co-founder of the environmental group "Mother Nature," told DW. Gonzalez-Davidson worked as an activist in Cambodia for 12 years until he was expelled in 2015 and his organization was banned.

"Less than ten years ago, people were being murdered in remote parts of the country because they were members of the opposition party," said Gonzalez-Davidson.

"It was not even reported in the press. Now, with Facebook and mobile phones, the regime works more subtly. Opposition members are being accused of crimes and jailed," he said, adding that the regime would jail a few individuals as an example to scare others.

Indeed, many Cambodians, and certainly the younger generation, want to see Hun Sen out of office. But few dare to voice discontent.

Within his own CPP party, Hun Sen also manages to quash protest. Most large companies in Cambodia are owned by the Hun Sen family, such as the biggest electricity supplier "Electricité du Cambodge," as well as popular TV channels.

Hun Sen's strategy is based on the credo "divide and rule." Cambodians can get a well-paid job as a commune chief or as a company manager, but in return they have to turn a blind eye to corruption, which takes many forms in the country.

A young activist who goes by the name "Elica" tries to help people who are victims of land grabbing. This is often carried out for silica sand mining that is used for constructing artificial islands.

"A lot of sand is being dredged and exported, often illegally," Elica told DW, adding that the sand is extracted from both private and protected lands.

"It happens even if people have a document that proves it's their property. These people are often low-skilled and don't know how to legally resist major companies," she said.

Elica also said she has been arrested. "I had to stay in jail for seventeen hours — so what? I only hope they will not drag me off my motorbike and make it look like an accident."

Activist Gonzalez-Davidson said there is an "underground economy" in Cambodia, in which money goes directly from companies to government representatives.

"You can't do business in Cambodia at that scale if you don't pay bribes. So you end up with pseudo-mafia businesses, often from China and Vietnam, which are not really businesses, but rather groups of people who register something in Cambodia at the ministry of commerce," he said.

In September last year, the Cambodia Daily, an independent newspaper, had to close its doors after receiving a $6.3 million (€5.4 billion) tax bill. The only other independent newspaper was bought months later by a Malaysian businessman, who is reportedly connected to the Hun Sen family.

The US-funded broadcaster Radio Free Asia (RFA) also had to shut down in Cambodia in 2017. The official reason was that RFA didn't have the necessary licenses to work as news broadcaster in the country.

A former RFA journalist, who goes by the name Dara, told DW that he was shocked by RFA's sudden closure. "I felt so sad. It's just like my soul went out of my body," he said. Dara ended up leaving Cambodia out of fear for his own safety after two of his colleagues were arrested.

It is known that Hun Sen is afraid of a so-called "color revolution" — a protest movement that he fears would topple the regime with American support. Never has the existence of such a movement been proven.

Dara still writes about Cambodia. "People have a right to know," he says. Now he sends his work directly to Washington, where they are broadcast via Asian channels. "But I lost my voice on the radio," he said.

"Journalism is my passion. I'm a journalist and will continue to do this profession." 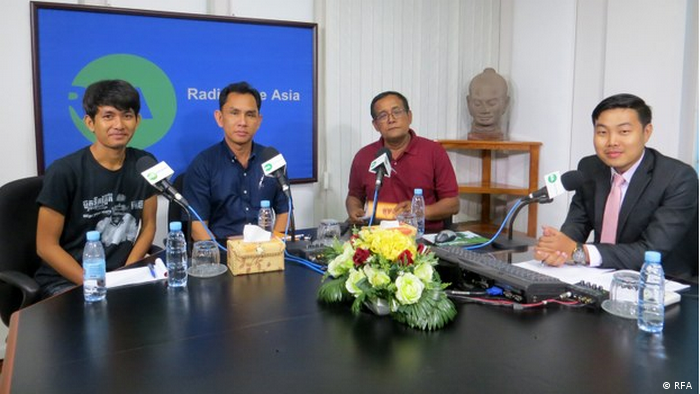 Dara (right) and his colleagues from Radio Free Asia

Vannak, Elica and Dara are all very skeptical about the upcoming election, and without any opposition it is very probable that Hun Sen will continue as prime minister.

"I won't go to the polling station," said Vannak. "First, I want to see some changes, then I'll go out to vote." He strongly believes his videos can help to bring about a change.

Elica will  vote. "I am registered anyway," she said, referring to the obligation to put your name on a list in advance to be entitled to vote.

"Maybe I'll write a message on my election letter. Something like 'we don't want you as our leader.'"

Alex Gonzalez-Davidson is not very optimistic about the short-term future of the country.

"People only want regime change and Hun Sen realizes that. So before the regime dies, it will bite," he said. "Once it's been injured, it will not die quietly, like a snake that bites, even though it knows that it is going to die."

"I'm very positive for the long-term prospects of the country, but I'm sure that things will become very bad in the next few months and years to come."

Following the publication of a story about the new owner of the Phnom Penh Post, the editor-in-chief has been fired and four staffers have resigned. The move has sparked fresh concerns over media freedom in the country. (07.05.2018)