Kem Sokha, the only major challenger to Prime Minister Hun Sen, has been accused of colluding with the United States to overthrow the government. The charges come amidst a widespread crackdown on opposition voices. 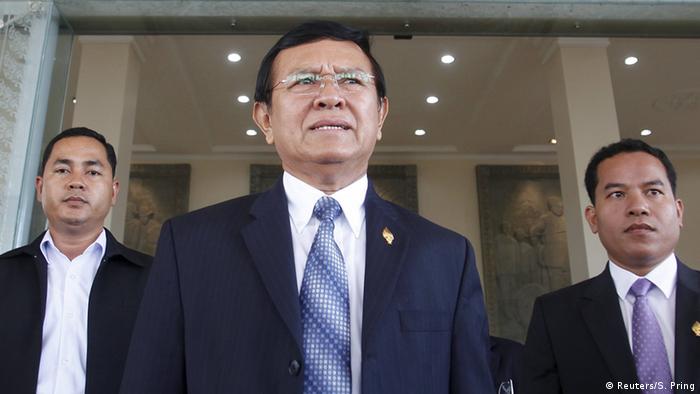 Cambodian opposition leader Kem Sokha was officially charged with treason and espionage on Tuesday by a municipal court in Phnom Penh.

If found guilty of "colluding with foreigners" to overthrow Prime Minister Hun Sen - who has been in power for over three decades - the Cambodia National Rescue Party (CNRP)  politician faces between 15 and 30 years in prison.

The Cambodian government claims to have video footage that provides proof of "secret plans of a conspiracy between Kem Sokha, others and foreigners to harm the Kingdom of Cambodia."

Pro-government website Fresh News reported that the video clip shows the opposition leader plotting with agents from the United States.

Critics of Prime Minister Hun Sen have pointed out the suspicious timing of the arrest. The CNRP made massive gains in local elections in June, and Kem Sokha would have been Hun Sen's major challenger in Cambodia's general election next year.

The charges came amidst a widen government clampdown on opposition voices. Not only political opponents, but also NGOs and press outlets critical of Hun Sen's administration have been shuttered across the country.

On Monday, one of the country's last remaining independent newspapers, The Cambodia Daily, was forced to close over tax charges it says are politically motivated.

Hun Sen is a one-time Khmer Rouge officer who fled to Vietnam when the brutal regime began internal purges of its leadership in 1977. He then led a rebel army with the help of the Vietnamese government and has led Cambodia in various iterations sine 1979. In 1987, Amnesty International accused Hun Sen of torturing thousands of political prisoners.

Until the rise of the CNRP, Hun Sen and his Cambodia People's Party (CPP) has remained largely unchallenged by any opposition.