Khieu Samphan, a former Khmer Rouge leader, denied accusations that his former government was involved in the mass genocide in Cambodia. He and another senior cadre, Noun Chea, already received life sentences. 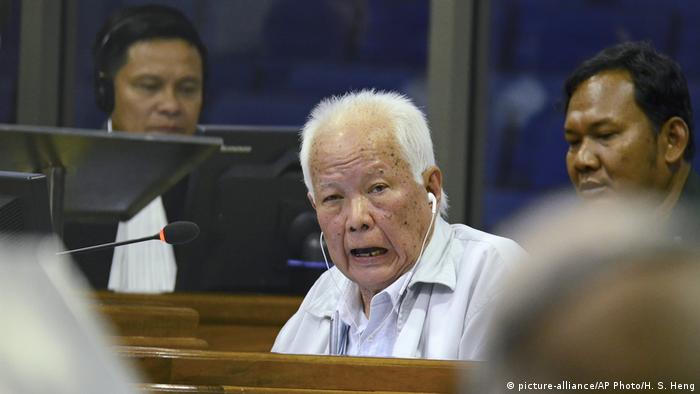 Khieu Samphan and Noun Chea, the two most senior living members of the Khmer Rouge government in Cambodia, were given an opportunity to address the Phnom Penh chamber on Friday as their UN-backed trial concludes.

Samphan, the former head of state of what was Kampuchea, used the opportunity to defiantly reject claims that the government was involved in the mass genocide in Cambodia between 1975 and 1979 that killed more than 2 million people.

"The Communist Party of Kampuchea leaders did not exterminate our people," he said, adding that "the idea of Cambodian genocide" was "Vietnamese propaganda."

The hybrid court - using a mix of Cambodian and international law - was created in 2006 to try senior Khmer Rouge leaders. The court split the trials of Samphan, 85, and Chea, 90, into a series of small hearings in 2011, fearing the pair might die before a verdict could be delivered. 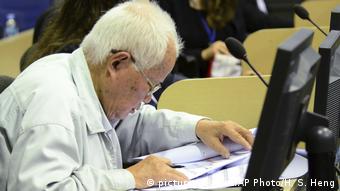 Many key Khmer Rouge members have passed away without facing a trial, including former prime minister and "Brother Number One" Pol Pot, who died in 1998.

Samphan and Chea already received life sentences in 2014 for crimes against humanity that centered around the forced evacuation of Phnom Penh, the capital of Cambodia, into rural labor camps and for murders at an execution site.

Samphan argued that the collective farms and worksites were a means to "urgently" rebuild a country facing famine.

"In order to rebuild and defend our country, the only force we had was the strength of the people. The wish of the Communist Party of Kampuchea at the time was not to subject the population to slavery for the sole benefit of Pol Pot," he told the court.

He also rejected being labeled a "murderer" after making eye contact with civil parties and witnesses who had testified in court. "I know that they really suffered. I also heard when they spoke to me sometimes referring to me as a murderer… But the term murderer, I categorically reject it."

Prior to Samphan's closing statements, Chea, known as "Brother Number Two," declined to speak to the court. His lawyer, Victor Koppe, spoke on his behalf, saying Chea believed he was part of a "show trial."

"Nuon Chea couldn't care less if you convict him again of a life sentence," defense lawyer Victor Koppe said. "He doesn't care because, rightfully so, he doesn't take this institution seriously."

Chea hoped the court would translate the defense team's closing statements into Khmer so the public would understand the hybrid tribunal was working on behalf of "American and Vietnamese" interests, according to Koppe.

The judge did not say when the verdict would be delivered.

The victims of the Khmer Rouge regime heaved a sigh of relief after the life imprisonments of genocide masterminds Nuon Chea and Khieu Samphan were upheld by Cambodia's UN-backed tribunal. Ate Hoekstra reports. (23.11.2016)