A UN-backed court has sentenced two former Khmer Rouge leaders to life for crimes against humanity. Trial monitor Heather Ryan tells DW the symbolic significance of the verdict is not easy to be overlooked. 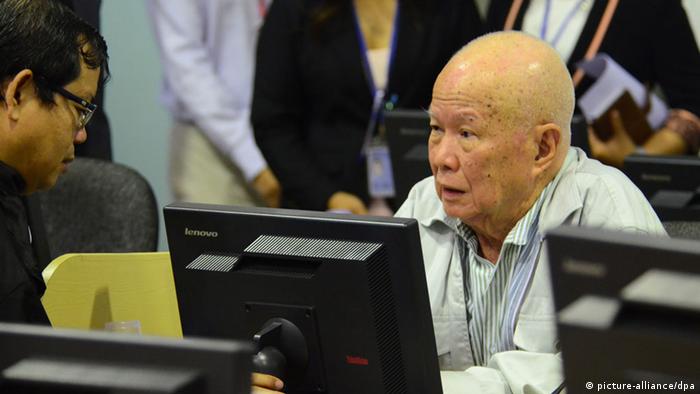 On Thursday, August 7, the tribunal handed down the first-ever verdicts against top figures of a regime that is largely believed to be responsible for the deaths of up to two million Cambodians. The 88-year-old Nuon Chea, better known as Khmer Rouge leader Pol Pot's Brother Number Two, and former head of state Khieu Samphan, 83, were key figures of the "Killing Fields" era of the Khmer Rouge regime from 1975-1979. As for Pol Pot, he died in 1998 without ever facing justice.

The ruling is likely to bring some amount of relief to those who survived the Khmer Rouge atrocities, which saw much of Cambodia's population wiped out by starvation, overwork, torture or execution.

Amnesty International called the verdict a "crucial step towards justice" more than three decades after the regime crumbled at the hands of Vietnamese invading forces. The European Union has also hailed the judgment. EU's foreign policy chief Catherine Ashton said in a statement that life sentences pronounced against Nuon Chea and Khieu Samphan were "an important positive step in the global fight against impunity." 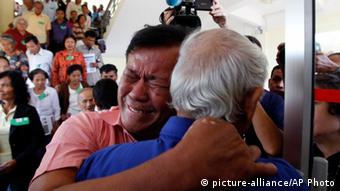 Survivors broke down into tears after the verdict was delivered

In a DW interview, Heather Ryan, a tribunal monitor for the Open Society Justice Initiative, says she hopes this trial would pave the way for a much more efficient second trial in the same case and against other former Khmer Rouge leaders.

DW: Are you satisfied with the verdict?

Heather Ryan: It was surely not unexpected. It looks like a comprehensive verdict that I think will satisfy many Cambodians. It is certainly an important milestone in Cambodia. And it is remarkable that the court was able to get to this point where the two senior-most surviving Khmer Rouge leaders have been held accountable and given full judgment.

The court, however, worked hard for this. It took the judges a long time, and a lot of people put tremendous effort in it.

A UN-backed trial in Cambodia has handed down life sentences for two surviving Khmer Rouge leaders. DW correspondent Abby Seiff was in Phnom Penh to capture the emotional reaction to the verdict. (07.08.2014)

Cambodia's war crimes tribunal has concluded hearings in the first trial of the surviving leaders of the Khmer Rouge movement. Prosecutors have called for a life sentence while the defence has requested their acquittal. (31.10.2013)

As the UN-backed tribunal is set to hear closing arguments in the trial of two former leaders of the Khmer Rouge, Cambodians expect a judgement that at least punishes the perpetrators of mass crimes symbolically. (15.10.2013)

We have seen a number of complications over the course of the trial. Do you think the verdict has finally removed them all and that there should be more optimism for the remaining parts of the trial?

Yes, the court has had a lot of problems, and I think it will continue to face a number of issues. But I don't think that it takes away the significance of the judgment. Of course, the court should operate more efficiently and with more independence. The Cambodians, I think, will look at the bigger picture and ignore some failings in terms of the length of the trial and other lacunas.

I hope that this trial will pave the way for a much more efficient second round. The tribunal will still face many problems. We don't know much about what is happening in Case 003 and 004, or how they will proceed.

If the tribunal was unable to pursue the case any further, what would be your reaction?

I think that would be unfortunate because it is a limited picture of what happened during the Khmer Rouge era - a glimpse of the crimes that occurred during that period. I think the second trial in Case 002 would be very important, and the trials in Case 003 and 004 would also be crucial to give a broader picture of the nature and magnitude of the crimes that were committed.

Heather Ryan is a tribunal monitor for the Open Society Justice Initiative (OSJI) - an independent organization that has been closely monitoring the Khmer Rouge trial since the start.

The interview was conducted by Abby Seiff, Phnom Penh.