Relief after upholding Khmer Rouge life sentences | Asia | An in-depth look at news from across the continent | DW | 23.11.2016

The victims of the Khmer Rouge regime heaved a sigh of relief after the life imprisonments of genocide masterminds Nuon Chea and Khieu Samphan were upheld by Cambodia's UN-backed tribunal. Ate Hoekstra reports. 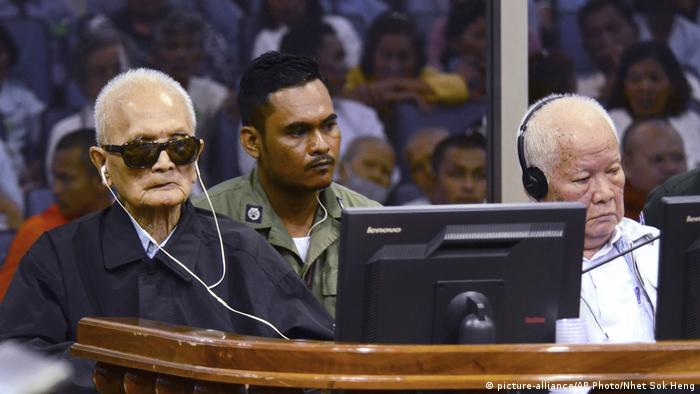 The judges of the Khmer Rouge Tribunal, officially known as the Extraordinary Chambers in the Courts of Cambodia, decided on Wednesday to uphold the life imprisonments of Nuon Chea, 90, and Khieu Samphan, 85.

Nuon Chea, known as "Brother Number Two," was the former chief ideologist of the Khmer Rouge, while Khieu Samphan was head of state. They are the first senior leaders held responsible for the death of an estimated 1.7 million people who died under Cambodia's Khmer Rouge regime between April 1975 and January 1979.

The judgement in the appeal upheld the initial verdict announced in August 2014 and confirms what most people in Cambodia have been suspecting for decades: Nuon Chea and Khieu Samphan are guilty of crimes against humanity, including murder.

Judge Kong Srim of the Supreme Court Chamber, which analyzed 371 grounds of appeal, said that the crimes committed by the Khmer Rouge "were not isolated events" and that life in prison for the two elderly men was "appropriate." However, the judge heavily criticized large parts of the trial against the Khmer Rouge leaders.

During the reading of a lengthy summary of the verdict, the court room on the outskirts of Phnom Penh was packed with people, most of them Cambodians. Many students had come to the court room, as well as monks, nuns and a large number of survivors of the Khmer Rouge regime.

'An example for other countries'

La Sangthorng is one of the students who came to Phnom Penh to hear the court's decision. Speaking outside the court room he said that he believes the verdict is very important in a trial that lasted for years. "These men did terrible things, so I think life in prison is a good decision and a fair judgement," La said. "This could be an example for other countries."

Yet, the judgement didn't come easily. In recent years, the Khmer Rouge Tribunal has been heavily criticized by both insiders and independent experts. The defense teams have accused the judges of being incompetent while a report published last year - jointly by the Stanford University, the Asian International Justice Initiative and the East-West Center - mentioned a large number of errors in the trial and spoke of a "confusing process."

During the announcement of the verdict, judge Kong Srim also said a large number of errors were made during the initial trial. Several times the judge stated that the evidence in some parts of the trial was weak, inadequate or lacking details. However, "the conclusion was not unreasonably affected," the judge said, reason enough for the Supreme Chambers to find the leaders guilty of crimes against humanity and to upheld the majority of the convictions.

Anta Guisse, the international lawyer of Khieu Samphan, was disappointed with the final outcome. "This is cosmetic justice," Guisse said in a press conference after the announcement of the verdict. "We hear the Supreme Chamber say that some errors were made, but we also hear that it doesn't lead to a different outcome. So it's just words."

The defense team of Nuon Chea had a more optimistic view. International lawyer Victor Koppe said he had "zero expectations" and that he was "happily surprised" by many of the considerations the Supreme Chamber had made. "But I can't explain Nuon Chea why it's still a life imprisonment sentence,"  Koppe said. "If you make so many points in the appeal, then why is it still a life sentence?" 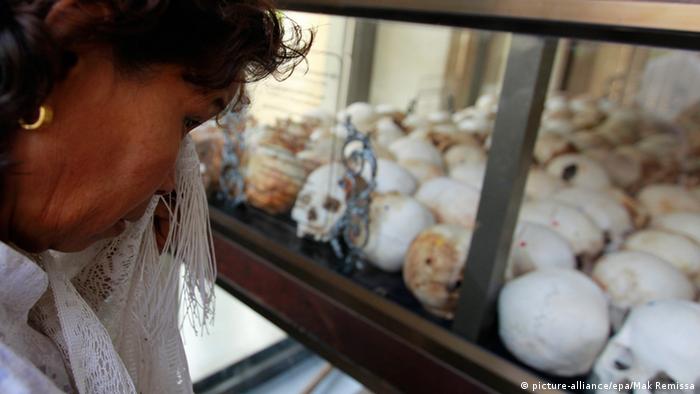 More than 1.7 million people were killed under the rule of the Khmer Rouge in Cambodia between 1975 and 1979

The Cambodian government said it was pleased with the verdict. Deputy Prime Minister Sok An called the trial against Nuon Chea and Khieu Samphan 'the most important case since Nuremberg," referring to the trials that were set up in the aftermath of World War II to bring Nazi war criminals to justice.

"Today is a historic day for Cambodia and for all humanity," Sok An said in a statement.

In a second trial, which is still ongoing, the court is investigating more alleged crimes Nuon Chea and Khieu Samphan are accused of, including genocide against Cham Muslims and Vietnamese minorities, forced marriage and a number of other atrocities committed under the the Khmer Rouge regime. A decision in those cases is expected next year.

Cambodia's UN-backed court has upheld life sentences for two former Khmer Rouge leaders convicted of crimes against humanity. The former regime killed mo​re than a million people during its rule in the 1970s. (23.11.2016)

Sydney Schanberg, who reported on the terror of the Khmer Rouge, has died of a heart attack in New York. He was one of few Western journalists to stay behind when Cambodia fell to the brutal dictatorship. (10.07.2016)

A criminal court has fined the country's exiled opposition leader for claiming the prime minister's Facebook page had been inflated by fake "likes." The opposition complains of state intimidation ahead of elections. (08.11.2016)