The proposal has stoked fears of censorship in Cambodia, where curbs to press freedom have increased in recent years. Many believe the new law could target those critical of the government. Ate Hoekstra reports. 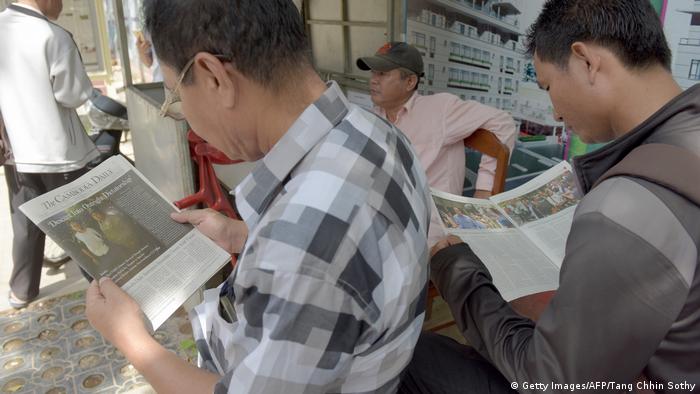 The crackdown on media in Cambodia may intensify with the proposal of a new law targeting creators and publishers of "fake news," which comes just weeks after Malaysia approved an "anti-fake news" law that could see offenders jailed for up to 10 years.

The suggestion to outlaw so-called fake news arose when Cambodian Prime Minister Hun Sen met with his Vietnamese counterpart Nguyen Xuân Phúc last week. According to the Phnom Penh Post, the two leaders discussed how to deal with supposedly inaccurate news. Following the meeting, a spokesperson for Cambodia's ruling party announced the potential changes, explaining that the law, if enacted, would apply "to some media in which they use the wrong information or fake news."

Although it's unclear if Cambodia will really implement an "anti-fake news" law, the fact it's being considered comes as no surprise. The Cambodian government regularly accuses the media of spreading "fake news," particularly reporting that is critical of government policies or government institutions. Last month, the Ministry of Posts and Telecommunications called for a fight against "fake news" and in January, Hun Sen said that media outlets considered producers of "fake news" by the government are guilty of violating the law.

Advocates of press freedom fear that an anti-fake news law could result in a clampdown on reporting that take issue with Hun Sen's government. The 65-year old Cambodian prime minister has been ruling the country since 1985 and is up for another election in late July – one that he is likely to win after his main competitor, the Cambodian National Rescue Party, was dissolved by the Supreme Court last year.

"We hope that Cambodia won't follow the example of Malaysia," said Edgardo Legaspi, executive director of the Southeast Asian Press Alliance, an organization that campaigns for press freedom in Southeast Asia. "This could be seen as an attempt from the government to have better control of the media. It will give the government more ammunition against critical reporting," he told DW.

Cambodia's independent media came under fire last year, with several major outlets forced into remission. The Cambodia Daily – a long-running and often critical daily newspaper – was left with no option but to shut down after it received a $6.3 million tax bill (€5 million), 32 radio stations were forced to close, and Radio Free Asia (RFA) felt compelled to pull out of the country. Two former RFA reporters were arrested and are on trial with charges of espionage.

A recent report by the Cambodian Center for Independent Media said that Cambodia's media sector "has been cut down and left reeling," and that threats against journalists have increased.

Pen Putsaphea has the same fear. Putsaphea works for Special Reporter, a news organization that broadcasts through Facebook and is closely aligned with the opposition party. He fears that the government now has its eyes on the activists who still dare to speak out.

"The government seems to think that these peoples' opinions are fake news, but they just show their ideas and share news from other media outlets. The government can't close that, so they make this new law," Putsaphea told DW in a phone call from Canada, where he's been living for the past 18 months for fear of being arrested in Cambodia.

Cambodia's crackdown on media is not unique in Southeast Asia. In the Philippines, media outlets face similar threats, with president Rodrigo Duterte threatening to shut down the often critical news site Rappler and regularly accusing it of being a "fake news outlet." Malaysia's recent anti-fake news law is a move many observers see as a way to limit freedom of expression in the run-up to the general elections that will take place on May 9.

Edgardo Legaspi believes that in silencing the press, Southeast Asian leaders are following in the footsteps of Donald Trump, the US president who often accuses media outlets he doesn't agree with of spreading "fake news." In this way, fake news represents a double edged sword, Legaspi said. "On the one side you have critical reporting that is being called out as fake news, on the other side there are pro-government groups that are actually using fake news against the opposition."

The Malaysian government has proposed a law that would impose jail terms of up to 10 years for creators and publishers of "fake news." Critics, however, accuse the government of ulterior motives. (26.03.2018)

Pakistan's new social media-related cybercrime ordinance has drawn ire from civil society activists who say the "draconian" legislation is likely to be used against government critics.

Stung by coverage of scandals that have embarrassed the ruling Democratic Party, the South Korean government says it is tackling "fake news." But opponents say the move is an excuse to restrict the media.