The National Assembly of Cambodia has passed a lese majeste law that makes it a crime to insult the country's monarchy. The legislation also places new restrictions on freedom of assembly. 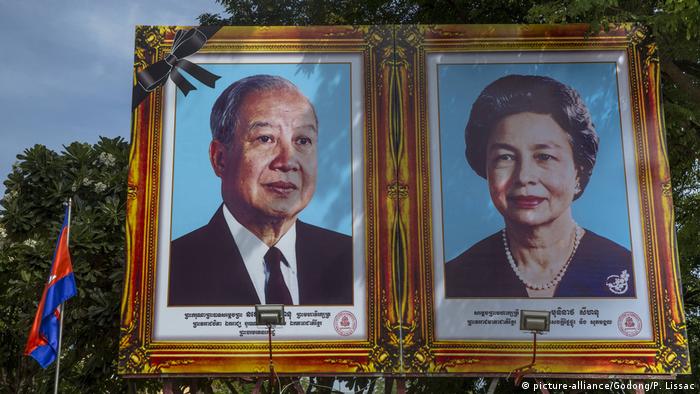 The 123 members of Cambodia's parliament who were present on Wednesday unanimously adopted a law that forbids insulting the monarchy, imposing stiff financial and custodial penalties on those convicted of the crime.

The changes to Cambodia's criminal law were initially drawn up by Prime Minister Hun Sen, and include a penalty of between one and five years imprisonment, along with fines of 2 million riel to 10 million riel ($500 to $2,500).

"An insult is expressed in words, gestures, writing, painting or objects that affect personal dignity," Pen Panha, head of the parliamentary Commission on Legislation and Justice, told the assembly.

King Norodom Sihamoni is the head of state of Cambodia, while Prime Minister Hun Sen has been head of government of the Southeast Asian country for more than three decades.

Officials to decide on behalf of royals

Prosecutors would be able to file criminal suits on the monarchy's behalf against any person deemed to have insulted the royal family.

Restrictions on freedom of assembly are also to be imposed.

Rights groups have expressed concern about the new measures, citing complaints from Thailand that a similar law there has been abused. Prosecutions have risen since a 2014 coup with critics of the Thai military saying the lese majeste legislation is used to silence dissent.

"There is a genuine danger that this law will be abusively applied to target those who express legitimate criticism of the royal government, as has been the case in other countries, such as Thailand," said Chak Sopheap, executive director at the Cambodian Centre for Human Rights, in comments to Reuters.

The ruling Cambodian People's party last year had the main opposition National Rescue Party dissolved while its leader, Kem Sokha, was arrested on charges of treason.